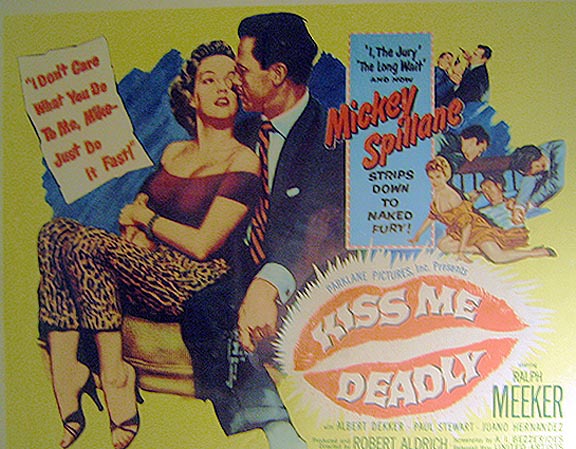 Mickey Spillane, the creator of hard-fisted private eye Mike Hammer, has died at the age of 88. Several of his kiss-kiss, bang-bang pulp novels -- including "I, the Jury," "The Long Wait" and "My Gun is Quick" -- were made into movies, and Spillane himself played Mike Hammer in the 1963 picture, "The Girl Hunters" ("Trapped in a Quicksand of Love...").

But the Spillane movie masterpiece is, of course, "Kiss Me Deadly" (1955), directed by Robert Aldrich and scripted by A.I. Bezzerides. It is considered one of the bookend landmarks of the age of full-blown film noir, beginning (roughly) with Billy Wilder's "Double Indemnity" (1944), and one of the most florid examples of that post-war style.

Recently, we featured Kim Morgan's appreciation of the opening shot of "Kiss Me Deadly," which is worth re-visiting. As Kim describes this crazy Pandora's Box of a movie (the inspiration for the glowing MacGuffin/Great Whatzit suitcase in "Pulp Fiction"), it's filled to bursting with "stark, hard-boiled cruelty, paranoia, insanity and psycho-sexual angst." That's a great capsule description, not only of this particular film, but of the Spillane sensibility in general. 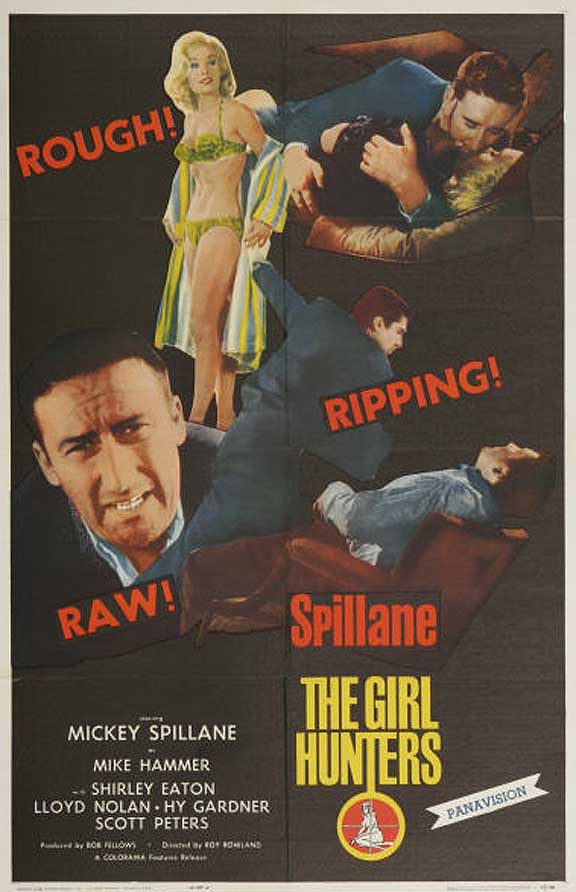 Likewise, Roger Ebert summed up essential qualities of the world created by Spillane and his chain-smoking, wise-cracking partners in crime in his brief "Guide to Film Noir":

1. A French term meaning "black film," or film of the night, inspired by the Series Noir, a line of cheap paperbacks that translated hard-boiled American crime authors and found a popular audience in France.

2. A movie which at no time misleads you into thinking there is going to be a happy ending.

3. Locations that reek of the night, of shadows, of alleys, of the back doors of fancy places, of apartment buildings with a high turnover rate, of taxi drivers and bartenders who have seen it all....