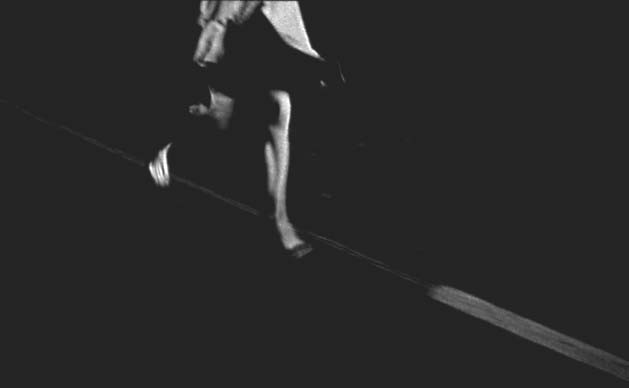 When reading the request for greatest opening shots, the first film that popped into my head was immediate and almost too easy — “Kiss Me Deadly."

And then I reflected more.

There are so many masterful opening shots, some I find works of genius or some I simply love. But the more I thought about it, the more I drifted back to where my mind always manages to drift back to — stark, hard-boiled cruelty, paranoia, insanity and psycho sexual angst — so there it was again, “Kiss Me Deadly."

But for good reason. Robert Aldrich’s masterful noir hits you with a hysterical bang that sets its frenzied tone with such balls-out experimental élan; you can’t believe the film was released in 1955:

Before any credit sequence, the film begins with a pair of naked feet running down the middle of a highway in the black of the night.

The feet belong to a hysterical, heavily panting blonde (Cloris Leachman) wearing only a trench-coat. As the soundtrack intensifies, cars pass by but none stop. Desperate for a ride, she places herself in the middle of the road and stands holding her arms out in a V. Finally, a cool little Jaguar sports car comes to a screeching halt, blinding her with its headlights and swerving to the side of the road. She walks towards the car, roughly breathing and panting but with some relief. The driver, Mike Hammer (Ralph Meeker) is agitated by this mystery woman/potential loony, begrudgingly “rescuing" her with a sneer. He spits:

“You almost wrecked my car. Well? Get in!"

As the woman enters the car, you hear a velvety-voiced female DJ announce a Nat King Cole song on the car radio. With the camera placed behind our two characters (one absolutely frantic, the other as cool as a cucumber), the credits roll upside down against the highway’s white lines. The only thing you hear is Nat King Cole’s elegant “Rather Have the Blues" and the woman’s hard, almost sexual sounding hyper-ventilating.

I’m still amazed by how totally perverse and subversive Aldrich’s kick start remains. How many pictures, even current pictures, would have the guts to place a viewer on this kind of edge? But he’s not playing simply for shock—Aldrich and cinematographer Ernest Laszlo instantly address the expressionistic, off kilter and monstrous universe we’re about to enter. Un-relenting, sleazy, mean, disorienting, neurotic, psychotic and hopeless, Leachman is the crazed conscious inside all of the film’s characters, maniacally running from a world that could explode (literally) by the opening of a suitcase. A seminal noir, a masterpiece of artistic pulp “Kiss Me Deadly" — opening shots alone — are exactly why the French praised Aldrich as “Le Gros Bob."

JE: You are so right, Kim. That opening image -- the bare feet and legs, the trench coat, the lines on the highway asphalt -- doesn't last more than a few seconds, but man does it have an impact. I can't help but think of Bunuel (well, feet), and I'm sure David Lynch had "KMD" in mind when he did the credits sequence for "Lost Highway" -- another sleazy, apocalyptic noir.