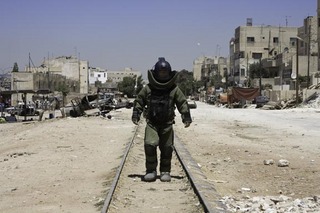 Is there a more achingly resonant movie title than "The Hurt Locker"? Fortunately, the movie lives up to it. To say that Kathryn Bigelow's film is the most accomplished white-knuckle action movie of this young century, or that it is the most fully realized Hawksian picture in recent memory, is not to say that it's a movie about chases or explosions (though it features both, and puts the last several years of big-budget summer "spectaculars" to shame) or that it is anything other than a Kathryn Bigelow movie. It's all those things.

On "My Life as a Blog," Reid Rosefelt recalls how he became friends with Bigelow in the late 1970s (that's him below, after the jump, between Hannah Schygulla and Bigelow!) and how he knew from the beginning that she was destined to make intelligent, gut-wrenching, boundary-bursting, medium-expanding movies:

She had a tremendous fascination with how violence could be portrayed in the cinema, particularly as seen through the filter of a French writer and philosopher I had never heard of named George Bataille. I got the sense that Bataille was some kind of mélange of surrealism and eroticism and de Sade-like cruelty, but the precise way he blended them and what he put in of his own was vague to me then, and even more vague to me now. But what I did understand was that Kathy wasn't just looking back to the styles and techniques of Hitchcock, Peckinpah, Romero, Argento, etc.--she was attempting to build on a highly aestheticized foundation. She didn't want to ape anybody else, she wanted to make a kind of movie that hadn't been made before. This I understood well, as it was a commonplace in European cinema for filmmakers like Godard and Resnais to use literary ideas as a means to "reinvent" cinema. The difference, and it was a huge one, is that Kathy was reading different books. What she wanted to create was more visceral and stomach-churning--more of a punch to the stomach and a battering of the subconscious than a detached and modish Brechtian challenge for the mind. [...] 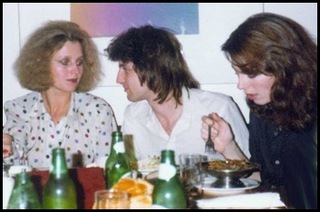 Right: Reid Rosefelt in the '70s with Hanna Schygulla and Kathryn Bigelow.

Just for fun, I googled "Kathryn Bigelow" and "George Bataille," and I found a 1998 academic paper, "Georges Bataille and the Visceral Cinema of Kathryn Bigelow," written by Jeff Karnicky, then a grad student at Penn State. He wrote: "This essay finds similarities between George Bataille's philosophy of expenditure and Kathyrn Bigelow's films "Strange Days," "Near Dark," and "Point Break." More specifically, I argue that, among other things, Bigelow's films viscerally elicit, in the film spectator, many of the concepts Bataille discusses in his writings, so that the practice of 'joy before death' becomes more than words on a page. Philosophy becomes visceral sensation, leaves the world of abstract thought and enters the domain of bodily sensations."

It helps to remember that Bigelow came to cinema from a background in painting, theory and criticism. Her films are intelligent from frame to frame, shot to shot, and they don't need to explain themselves: "Philosophy becomes visceral sensation." Take the image, in "The Hurt Locker" of a man on a scorching, deserted Baghdad street, wearing a 100-pound protective "bomb suit" and walking steadily toward a rendezvous with an IED. He's a mythological hero, a sheriff in a Western facing down the bad guy... only the "bad guy" is anywhere and everywhere. The image is existential. In one scene James (Jeremy Renner) takes off the suit and we cringe at what we perceive as his nakedness, his vulnerability. But he knows, at this proximity, the suit doesn't matter. It won't protect him any more than his skin will. Nobody in the movie has to tell you any of this. You feel it. You understand it in your blood. That's what makes it a tremendous movie -- far and away the most impressive one I've seen this year (not that I've seen all that much).

I hope to write much more about "The Hurt Locker" -- and I'm eager to see it again -- because it hits some of the same nerves as "No Country for Old Men" does for me. Meanwhile, I'd also like to revisit some of Bigelow's other movies, particularly "The Loveless" (which I haven't seen since 1984), "Blue Steel" (a personal favorite), "Near Dark" (sharpest, most blood-curdling modern-day American vampire movie since George A. Romero's essential "Martin"), "Point Break" and "Strange Days"...