George Lucas: Give it up 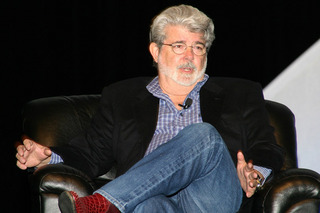 Ever since 1977, George Lucas has been talking about making those "small, personal" movies he's always dreamed of making. You know, like "Revenge of the Sith." He did direct a small, personal movie in 1973, it was called "American Graffiti," and it is his most impressive directorial achievement. Since then, it's been nothing but "Star Wars" and "Indiana Jones" (with the occasional executive producing jobs on fantasies and friends' movies, just to lend his name to them).

At MSN Movies I have a small, personal essay that should win me lots of friends. My thesis is that, after the 22-year gap between "Star Wars" and "The Phantom Menace," Lucas has shown that the "Star Wars" universe is his most personal project. And yet he's still talking about directing those "little movies." I say: Don't bother:

That's not all of them, but you get the picture. After 22 years of product management, Lucas returned to directing with the unfortunate "Phantom Menace," and completed the prequel trilogy with "Attack Of The Clones" and "Revenge of the Sith" between 1999 and 2005. Were these the "small, personal" films he'd been waiting all this time to create? Apparently not. He's still talking about an urge to get small, get personal, with his movies.

No thanks. Especially if it's anything like his buddy Francis Coppola's teeny "Youth Without Youth" last year. Lucas is a mogul. Louis B. Mayer didn't direct movies. Lucas' last three directorial efforts haven't exactly enhanced his reputation. Perhaps he should just stick to moguldom. He's good at that.