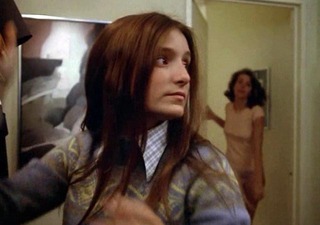 One of my favorite movie lines ever, impeccably written and delivered so that it has stayed fresh and funny for me every single day since I first heard it 30 years ago:

"We saw the new Lina Wertmuller film.... I loved it. Phil thought it was flawed."

BTW, I'm struck that studios hardly ever make mainstream movies like this anymore, naturalistic, humanistic comedy-dramas about adults who look, talk and behave like adults -- or like15-year-olds, depending on the circumstances. "An Unmarried Woman" is flawed, and I love it. (Clayburgh's shrink still drives me up the wall, but I never doubted that she was a dead-accurate caricature. Now I think she's hilarious; I used to just feel outrage that she was so full of shit and granola: "Guilt is a man-made emotion.... Turn off the guilt.")

Even if the movie plays like a '70s period picture in some ways (and it did then, too -- because it was made and set in a recognizable '70s New York movie-milieu), it's as smart and honest and observant as ever. Almost shockingly so, given what's passing for adult drama on big screens right this minute....