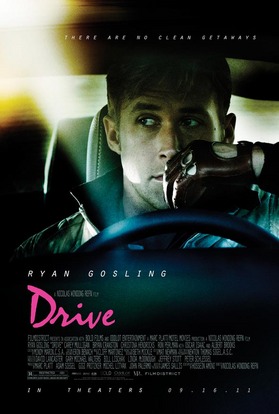 I was going to say, up front, that I had some mixed feelings about Nicolas Winding Refn's "Drive," but I'm not sure that "feelings" is the appropriate word. This 1980s pastiche (isn't that the "Risky Business" typeface lit up in neon pink?) is emotionally and narratively stripped down to resemble the sleek, polished surfaces of... well, muscle cars, but also movies by the likes of Walter Hill ("The Driver"), Michael Mann ("Thief"), William Friedkin ("To Live and Die in L.A." (1985)), Paul Schrader ("American Gigolo") and others. It even sports an aggressively ersatz-Tangerine Dream synth score of the kind so popular in the early 1980s, though this one also features some Euro-vocals with unfortunate English day-glo-highlighter lyrics ("a real human being and a real hero..."). Emotion, character, story -- they're not so much what "Drive" is interested in. The movie makes fetishistic use of signifiers for those things, but its most tangible concerns have (paradoxically?) to do with dreamy abstractions of color and shape and movement.

I like the red a lot. Not just the blood (which is the heart of the film, and I'll get to that in a minute), but there's so much blue (teal?) and orange and pink that when the red starts gushing in, it pumps some real excitement into what has, by that point, settled into a fairly static picture. (In some respects, I think "Drive" perversely hints at an art-house action movie -- and an erotic movie -- it never quite delivers, after a pretty [and] terrific archetypal getaway chase at the beginning, in which the Driver shows off his skills at using Los Angeles infrastructure to play hide-and-seek with cop cars and helicopters. Thank goodness, though, that it never turns into the racetrack movie it briefly threatens to become.) 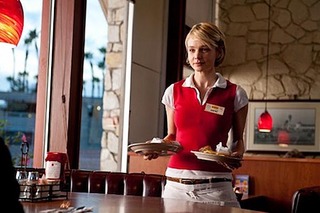 So, the red: It excites the eyeballs (and signals imminent danger) in the red-and-white checkered windows at Nino's Pizza. But as I recall, it really gets going at Denny's. The nameless Driver (Ryan Gosling), a movie stuntman who also works as a mechanic and moonlights as a getaway car wheelman-for-hire, sits down with his generic romantic-interest neighbor Irene (Carey Mulligan), who wears a red uniform vest as a Denny's waitress, in a booth with red light fixtures above it and a BIG plastic bottle of ketchup on the table. I don't remember what the conversation is about -- it doesn't matter, but it's probably something about her husband Standard (Oscar Isaac), who's just got out of jail and owes money to some brutal sleazebags who are threatening to physically harm him and Irene and their son Benicio (Kaden Leos), to whom Driver has also taken a shine. What I remember is the red. The film becomes pregnant with red. 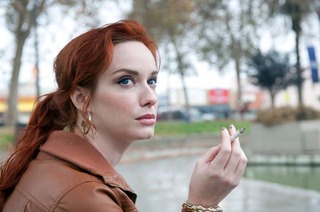 Then there's Christina Hendricks' hair. Is that for real, that red hair? Because it's as red as Joan's on "Mad Men." Here Hendricks plays Blanche (not Rosa?), a spike-heeled robbery accomplice. In a movie in which even the lead roles are deliberately underwritten, she deserves much, much more of a part. Because she's Christina Hendricks, dammit, and it's a sin to underuse her.

Now, about that other red. (Spoilers ahead.) Was it inappropriate of me to burst out laughing when a guy stomped and stomped and stomped another guy's head until it smashed open like a swollen pomegranate? Or when one character placed a bullet on another's forehead and threatened to smack it with a hammer (which I wish he had done)? Or when somebody in a pizzeria skewered and slit a hateful moron with a large kitchen knife? I don't think so -- although, in the quarter-full theater in which I saw "Drive," I was sometimes the only one laughing. (I did not laugh when a man was shot from behind; when a woman's head was blown apart by a shotgun; or when a man's arm was sliced open with a straight razor -- those eruptions of red were not funny.) But the red was so abstract at this point in the film that, as explicit as the gore was, there was nothing "real" about it.

I'm still trying to suss out the reasons for my own unconscious, involuntary reactions, though. The movie is so emotionally/sexually repressed (all cool, slick surfaces, glazed reflections and valentine-candy-heart cliches) that this over-the-top, graphic-but-artificial RED -- it's not just red, it's blood -- feels like an absurd, joyous, orgasmic release. (I'm told the director has said the same thing.) When Driver can't stop booting the skull of the guy in the elevator (after a Lynchian calm-before-the-storm kiss with Irene that goes on forever), it's so ridiculously (self-)destructive that my laugh erupted from my lungs like a cough.

Driver seems like a control freak with a screw loose from the start. (Not that conventional notions of character psychology necessarily apply in a movie where the key crime is supposedly motivated by a cartoonish Jewish L.A. mobster's resentment of East Coast Italian-American anti-Semitism.) His attraction to Irene and Benicio is portrayed as an idealized, movie-fantasy psychopathic compulsion, like Travis Bickle's to Iris (Jodie Foster) in "Taxi Driver," or Jeffrey Beaumont's to Dorothy Vallens (Isabella Rossellini) in "Blue Velvet." (I imagine he's like a reluctant version of The Stepfather and probably slaughtered his previous family in Scottsdale with power tools. He feels bad about that now, and has come to L.A. for a new start, trying to channel his rage in new directions.) But after the head-crushing, it's irrefutably clear that he's got major anger issues. And that finally makes him interesting, instead of just a generic placeholder protagonist-device. (Nice shot in the elevator: Back of his silk scorpion jacket heaving with his breath.)

Three character performances are given the chance to shine here -- bits of color and life around the self-consciously undemonstrative leads. Shannon (Bryan Cranston), the dreamer plagued with bad luck, is probably the movie's most sympathetic character -- even (or especially) when he dooms everyone with an understandable inability to apprehend the bigger picture. Nino (Ron Pearlman) is a whimpering wolfhound whose bruised ego leads him to overreach. And best of all is Bernie Rose (Albert Brooks), a former movie producer of faddish 1980s action and sex pictures ("Some critic called them European. I thought they were shit") turned grimy venture capitalist. These guys act like tough guys, but that's just the point: they're acting, and they don't know that they're out of their league.

Aside from the red at the Denny's, my favorite moment in "Drive" is an enigmatic mini-flashback in the climactic scene at the Chinese restaurant, the Great Wall. Driver and Bernie meet up to hand off The Money, and when they go to the parking lot and open the trunk of the car (most of this shown only as shadowplay on the pavement), there's a quick return to the restaurant moments before, when each man looks at the other and seems to nonverbally acknowledge that he knows what is about to transpire. These two know they are (frog-and-scorpion-like) locked into a terminal transaction.

P.S. If you look at the frame grab of the scene in the strippers' dressing room (which I took from an online trailer) you'll see that the breasts have been digitally removed. That is not the case in the R-rated picture itself, only in the green-banded trailer.

NOTE: I don't really do "reviews" here at Scanners. These are some informal observations about some things in the movie I find interesting...