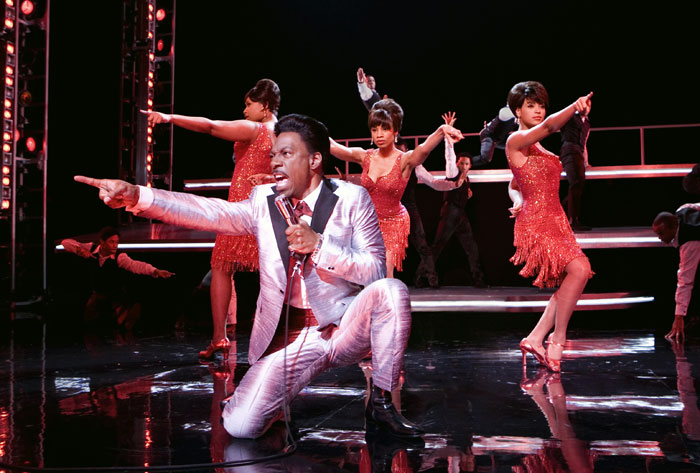 Eddie Murphy and back-up singers in a soul revue from "Dreamgirls."

Atlantic, Stax/Volt, Motown... Those are three (four?) of my favorite record labels -- and two of 'em are in the news now. Of course, Bill Condon's film of the 1981 musical "Dreamgirls" is loosely based on a slice of Motown history involving Diana Ross and the Supremes. (The slick diva lead singer is named Deena. Subtle.) "Dreamgirls" is playing roadshow engagements in LA, NY and SF -- and opens around the rest of the country on Christmas.

But on a far more significantly note: Last week, music mogul Ahmet Ertegun, founder of the great soul/jazz/pop/rock label Atlantic, died at age 83. Ertegun, along with several others whose names on LP jackets I came to associate with great music (his brother Neshui, Jerry Wexler, Tom Dowd, Arif Mardin...), made Atlantic into one of the greatest recording imprimaturs in American history. (In no small part thanks to its partnership with Memphis-based Stax and Volt.)

Today, the Atlantic/Stax/Volt legacy is in the hands of the brilliant archival label, Rhino, which recently released a terrific box set: "What It Is! Funky Soul and Rare Grooves (1967-77)" from the vaults of Atlantic, Atco and Warner Bros. Records (which includes stuff from Curtom, Cotillion, Reprise... -- labels are as fascinating to me as movie studios, and some have equally distinctive house styles). An earlier indispensable Rhino collection -- "Beg, Scream & Shout! The Big Ol' Box of '60s Soul" -- has a lot of the Stax/Volt material, and comes in a replica carrying case for 7" 45 rpm singles. And I'm thrilled and relieved to see that the 203-track, 8-disc "Atlantic Rhythm and Blues 1947-1974" (which I originally had on LP, then repurchased on CD in the 1980s) is still in print -- along with many of the original albums.

The best appreciation of Ertegun and Atlantic that I've read is from That Little Round-Headed Boy, who even includes a convenient 45 adapter for use on 33 1/3 rpm long-playing turntables! (Bur remember: For best results observe the R.I.A.A. high frequency roll-off characteristic with a 500 cycle crossover.) Not only that, TLRHB adds his own list of favorite Atlantic sides. (And, yes, I've always had a soft spot for Clarence Carter's "Patches," too... and I fervently believe that Aretha Frankin's "Until You Come Back to Me" is to Atlantic what the Temptations' "My Girl" and Stevie Wonder's "Signed, Sealed, Delivered" are to Motown/Tamla -- single-slices of heaven on Earth.)

This is a mono posting and may be played on stereo equipment.