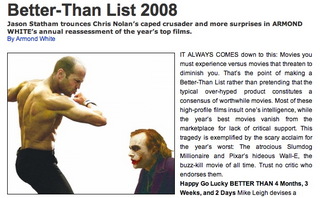 I was going to ignore it, I really was. But several people have e-mailed me about the appearance of Armond White's "Better-Than List 2008," and requested an opportunity to discuss it here. Well, OK.

White insists once again that what "it all comes down to" is a contest between "movies you must experience versus movies that threaten to diminish you":

Most of these high-profile films insult one's intelligence, while the year's best movies vanish from the marketplace for lack of critical support. This tragedy is exemplified by the scary acclaim for the year's worst: The atrocious "Slumdog Millionaire" and Pixar's hideous "Wall-E," the buzz-kill movie of all time. Trust no critic who endorses them.

So, it's not really Batman vs. the Joker. It's "Transporter 3" BETTER THAN "The Dark Knight": "Olivier Megaton, Jason Statham and Luc Besson reinvent the action movie as kinetic art, but impressionable teenagers mistook Chris Nolan's nihilistic graphic novel for kool fun."

I can't tell from that sentence (which constitutes the entirety of White's blurb-ument in this case) what the first part has to do with the second part, but it illustrates once again the meaninglessness of plugging movies into equations and pretending it's criticism.

That's what I hope our multi-threaded discussions of "The Dark Knight" demonstrated. Anybody can say they like this movie better than that movie, but to do so has nothing to do with film criticism. It's just asserting a preference, not an attempt to understand or explain something. White says "Shotgun Stories" is BETTER THAN "The Wrestler." Well, guess what: I put "Shotgun Stories" on my ten best list but not "The Wrestler." So, I must agree with him, right? No. Wrong. He says "Shotgun" is "better," uh, because it "was ignored by Blue State critics who prefer white-trash WWF stereotypes to encourage their sense of class superiority." That's not even an argument. I don't know what it is. Apparently the worthiness of the movies is determined by some form of inverse relationship to the critics who ignored them or preferred them. That's as ludicrously immaterial as saying that "The Dark Knight" is bad because it's popular. Or that "The Dark Knight" is good because it's popular.

I suppose I think of film criticism the way I've heard Hebrew scholars describe their approach to the Torah: It's not about discovering dogma, it's about learning to ask meaningful questions, even if you can never fully answer them.

So, that's not to say that White may not be entirely, demonstrably right to say that "Transporter 3" (which I haven't seen) reinvents the action movie as kinetic art. He may also be right (and the one unmistakeable message I get from him is that he wants to be seen as right!) that impressionable teenagers thought "The Dark Knight" was "kool fun." (He may even be correct that the movie is "nihilistic.") But who cares? The problem with his formulation is that it's blatantly nonsensical. The first comment is about his assessment of "Transporter 3" and the second is his characterization of the audience for "The Dark Knight."

To this, I say: Bruges is the best-preserved medieval town in Belgium apparently, but some Irishmen enjoy using the term "midget."

A couple more samples, below. See if you can figure out in advance what the point(s) of comparison will be:

"Battle for Haditha" BETTER THAN "Frost/Nixon"