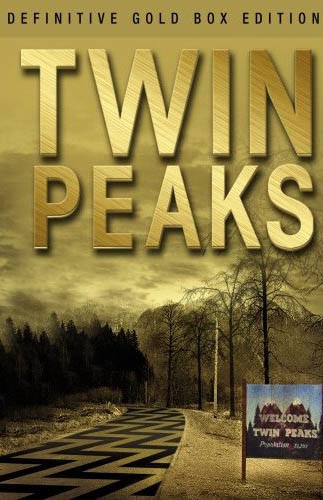 At the Great Northern, you can check out anytime you like, but you can never leave.

What's better than a cup of good, hot, black coffee? Well, nothing. But almost as good is the announcement of the "Twin Peaks: Definitive Gold Box Edition" DVD box set (due Oct. 30, 2007), which will include both seasons of the show and -- for the first time ever on DVD -- the two-hour pilot episode! Not only that, but two versions of it: the one that originally aired on ABC, and the "European" version (with its own bizarre coda/ending) that was released in theaters overseas.

Oh, and that's not all. According to the My Two Cents blog at The Digital Bits:

You'll also get Log Lady introductions for each episode, never-before-seen deleted scenes, production documents, the 4-part "Secrets from Another Place: Creating Twin Peaks" documentary (includes "Northwest Passage: Creating the Pilot," "Freshly Squeezed: Creating Season 1," "Where We’re From: Creating the Music" and "Into the Night: Creating Season 2"), the "A Slice of Lynch" retrospective roundtable discussion video, the "Return to Twin Peaks" featurette, 13 TV spots, 3 image galleries (The Richard Beymer Gallery, Unit Photography and Twin Peaks Trading Cards), 3 Georgia Coffee commercials, Julee Cruise's "Falling" music video, 8 interactive maps and Kyle MacLachlan's monologue and "Twin Peaks" sketch from "Saturday Night Live." The episodes have all been remastered from the original negatives (a process personally supervised by Lynch) and will be presented in the original full frame aspect ratio with audio in both newly-mixed Dolby Digital 5.1 and the original 2.0.

Consider the new, two-disc DVD edition of Lynch's most recent feature "Inland Empire" a warm-up for this.

I believe talking is OK separate from a thing, but a commentary track that goes along through a film, I think, is maybe the worst possible thing a person could do. From then on, the film is seen in terms of the memory of that commentary and it changes things forever. [...]

There are things in "More Things That Happened" [a selection of additional scenes on the 211-minute second disc] that give a feeling that could be like a brother or sister to the film. It's like if you know a family, but you haven't met the sister yet. You go over to Ohio and meet the sister, and it adds more to the feeling of the whole family.

Obviously, I disagree with Lynch on the "commentaries" -- which provide one of the best ways of studying a film. But I see his point: When it's the filmmaker, rather than a third party (like a critic or a scholar) who is doing the talking, it makes the comments seem limiting, more like a statement than than an interpretation of the film. And Lynch does not like to put strictures on interpretations of his work. (I've seen him, in audience Q&A sessions, tell people when they're just flat-out, off-the-charts wrong about second-guessing his intentions, though.)

(Thanks to Jeff Shannon for passing along this news.)