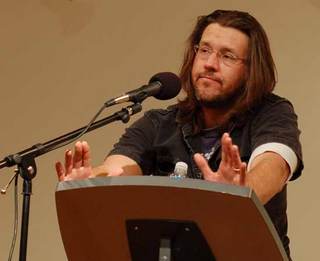 The apparent suicide of David Foster Wallace, shockingly sad and disturbing as the sudden death of Heath Ledger earlier this year, has me revisiting my memories of his writing. I know him from his short stories and nonfiction -- never tackled "Infinite Jest," even though I bought it in hardback when it was first published. I won't put off reading it much longer.

13. WHAT EXACTLY DAVID LYNCH SEEMS TO WANT FROM YOU

MOVIES ARE AN authoritarian medium. They vulnerabilize you and then dominate you. Part of the magic of going to a movie is surrendering to it, letting it dominate you....

...The sitting in the dark, the looking up, the tranced distance from the screen, the being able to see the people on the screen without being seen by the people on the screen, the people on the screen being so much bigger than you: prettier than you, more compelling than you, etc. Film's overwhelming power isn't news. But different kinds of movies use this power in different ways. Art film is essentially teleological; it tries in various ways to "wake the audience up" or render us more "conscious." (This kind of agenda can easily degenerate into pretentiousness and self-righteousness and condescending horsetwaddle, but the agenda itself is large-hearted and fine.) Commercial film doesn't seem like it cares much about the audience's instruction or enlightenment. Commercial film's goal is to "entertain," which usually means enabling various fantasies that allow the moviegoer to pretend he's somebody else and that life is somehow bigger and more coherent and more compelling and attractive and in general just way more entertaining than a moviegoer's life really is. You could say that a commercial movie doesn't try to wake people up but rather to make their sleep so comfortable and their dreams so pleasant that they will fork over money to experience it -- the fantasy-for-money transaction is a commercial movie's basic point.

An art film's point is usually more intellectual or aesthetic, and you usually have to do some interpretative work to get it, so that when you pay to see an art film you're actually paying to work (whereas the only work you have to do w/r/t most commercial film is whatever work you did to afford the price of the ticket).

David Lynch's movies are often described as occupying a kind of middle ground between art film and commercial film. But what they really occupy is a whole third kind of territory. Most of Lynch's best films don't really have much of a point, and in lots of ways they seem to resist the film-interpretative process by which movies' (certainly avant-garde movies') central points are understood. [...]

You almost never from a Lynch movie get the sense that the point is to "entertain" you, and never that the point is to get you to fork over money to see it. This is one of the unsettling things about a Lynch movie: You don't feel like you're entering into any of the standard unspoken and/or unconscious contracts you normally enter into with other kinds of movies. This is unsettling because in the absence of such an unconscious contract we lose some of the psychic protections we normally (and necessarily) bring to bear on a medium as powerful as film. That is, if we know on some level what a movie wants from us, we can erect certain internal defenses that let us choose how much of ourselves we give away to it. The absence of point or recognizable agenda in Lynch's films, though, strips these subliminal defenses and lets Lynch get inside your head in a way movies normally don't. This is why his best films' effects are often so emotional and nightmarish. (We're defenseless in our dreams too.)

This may in fact be Lynch's true and only agenda - just to get inside your head. He seems to care more about penetrating your head than about what he does once he's in there. Is this good art? It's hard to say. It seems - once again - either ingenuous or psychopathic. It sure is different, anyway.

13(A). WHY THE NATURE AND EXTENT OF WHAT LYNCH WANTS FROM YOU MIGHT BE A GOOD THING

IF YOU THINK about the outrageous kinds of moral manipulation we suffer at the hands of most contemporary directors²³, it will be easier to convince you that something in Lynch's own clinically detached filmmaking is not only refreshing but redemptive. It's not that Lynch is somehow "above" being manipulative; it's more like he's just not interested. Lynch's movies are about images and stories that are in his head and that he wants to see made external and complexly "real." His loyalties are fierce and passionate and entirely to himself. [...]

23 Wholly random examples: Think of the way "Mississippi Burning" fumbled at our consciences like a freshman at a coed's brassiere, or of "Dances with Wolves" crude smug reversal of old westerns' 'White equals good and Indian equals bad' equation. Or just think of movies like "Fatal Attraction" and "Unlawful Entry" and "Die Hards" I through III and "Copycat," etc., in which we're so relentlessly set up to approve the villains' bloody punishment in the climax that we might as well be wearing togas.

I wonder what David Foster Wallace would say about these passages from his assessment of Lynch today. Or, more precisely, last week, when he still could have. I love his wry, perceptive take on the difference between "art films" and "commercial movies," and I appreciate what he says about Lynch even as I'd like to know more about the language he uses.

I used to describe Lynch similarly, as someone who tries to put what's in his head directly onto the screen with as little mediation as possible. (In that sense, he's a Surrealist.) But as "Mulholland Dr." (2001) and "Inland Empire" make abundantly clear (and this is probably the only thing they make abundantly clear -- which I mean as a compliment), he doesn't necessarily know what's in his head before he's finished creating the movie. He says he dreamed the ending of "Mullholland Dr." after the network turned it down as a TV pilot. And he celebrated the freedom of using low-definition video for "Inland Empire" because he said it allowed him to go deeper inside the scenes with the actors -- while they were happening -- and to discover more than he had imagined.

That sense of discovery is, I think, particularly apparent in "Mullholland Dr." and "Inland Empire" (and "Eraserhead"), and what helps make them his most rewarding and challenging movies -- and "Twin Peaks" his greatest achievement. Too much of "Blue Velvet" felt to me like it was not so much "manipulative" as pre-programmed, and its occasional reassuring winks to the audience too much like comic-relief cliches -- as if Lynch were hedging his bets, hinting that he wasn't entirely serious even if (I hope) he was.

At this moment, however, I am appreciating Lynch through Wallace's eyes. Read this 1996 Lynch piece alongside the 2005 commencement speech I quoted from below, and you can get some idea of why Lynch's definition-resisting films spoke to him so profoundly.