Darren Aronofsky agrees with me

In the new issue of American Cinematographer, Darren Aronofsky (whose film "Black Swan" is heavy on close-ups) is quoted saying:

We used a lot of close-ups. For me, the close-up is one of the great inventions of the 20th century; it allows an audience to sit in a dark room and stare into the eyes of a person who's emoting without being self-conscious.

A primal fascination of the cinema, I'd say. A few weeks back I wrote:

Last spring I was on a panel at the Conference on World Affairs in Boulder, CO, called "Why We Still Go to the Movies." The first thing I said (because it was the first thing I thought of) was: "Permission to stare." I wasn't thinking about any particular movie (the title said "the movies") or about the business or anything like that. I was trying to get at the essential appeal of the movie-watching experience. And, for me, that has always been about looking really closely, and paying rapt attention to what is on view. Remember how your mom always said it wasn't polite to stare? Well, it's just the opposite at the movies. 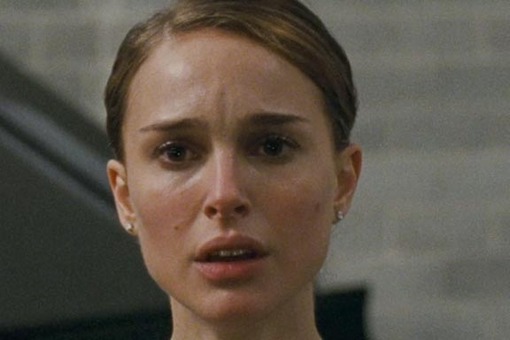 Cinematographer Matthew Libatique tells AC that most of the film was shot with a 12-18 mm lens, a wide-angle format that creates a subjective effect (subliminal or exaggerated, depending on the shot itself) in which the background wraps itself around the subject in the center of the frame. Like "The Wrestler," "Black Swan" uses what Libatique describes as handheld 16mm (gauge) cinéma vérité to follow the main character around, especially when she's dancing, in rehearsal or onstage. If you've seen the film, you know how this works...

Above: Natalie Portman has an expression of fear and distress -- as if she could break into tears at any instant -- clear into the opening night performance of "Swan Lake" in Aronofsky's "Black Swan." The moment in which she finally changes her pained expression is both a cathartic release and a shocking jolt of tension, like a melodramatic version of the tip of the tureen lid in "Jeanne Dielman."

UPDATE (12/09/10): I wasn't thinking so much of close-ups when I wrote about cinematic voyeurism; that was the spin Aronofsky put on his observation about sitting in the dark and staring at people.

But, now that he mentions it... another chance to recycle my "Close-Up" essay/dream sequence originally contributed to the Close-Up Blogathon at the House Next Door in, what, 2007?