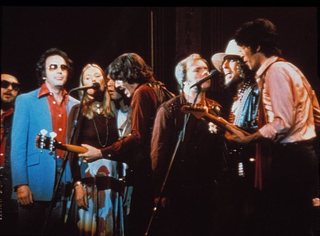 Chicago music critics and "Sound Opinions" radio co-hosts Jim DeRogatis and Greg Kot are hosting an evening devoted to their "best rock movies of all time" Friday at the Pabst Theater in Milwaukee. They're not saying yet what those will be (besides, let's face it, "This Is Spinal Tap" and "Stop Making Sense" and "The Girl Can't Help It" and...). But DeRogatis was happy to eliminate some of the usual suspects in advance during an interview with the Onion A.V. Club Milwaukee. A few choice comments:

On "The Last Waltz" (Martin Scorsese, 1978): "I'm from the punk era. I believe what's great about rock 'n' roll is community and the tearing down of boundaries. And the basic thrust of 'The Last Waltz' is that these are superheroes so much better than you.."

On "Heavy Metal Parking Lot" (Jeff Krulik and John Heyn, 1986): "I think there's a condescension to the heavy-metal audience. It's like, 'We are going to show these people as boneheads.' And not all metal fans are boneheads.... You gather 1,000 people and there's always going to be 100 jerks."

On "Woodstock" (Michael Wadleigh, 1970): "I hate Woodstock. There is the birth of one of the most destructive myths shoved down the throats of Generations X and Y ever... This notion that a bunch of hippies rolling in the mud while some mediocre music plays is the beginning of the age of Aquarius, who the fuck are you kidding?"

On "The Buddy Holly Story" (Steve Rash, 1978) and "La Bamba" (Luis Valdez, 1987): "Nobody in indie rock that Pitchfork loves circa 2010 is half as geeky as Buddy Holly, and nobody was nearly as swarthy, more punk-rock, or grungier than Ritchie Valens. But on the screen they're these lovable sweethearts."

On "The Doors" (Oliver Stone, 1991): "Buddy Holly and Ritchie Valens are great, but the Doors were cheesebos to begin with. Oliver Stone's Doors movie is just so laughably bad."