Corn goes in one end and profit comes out the other 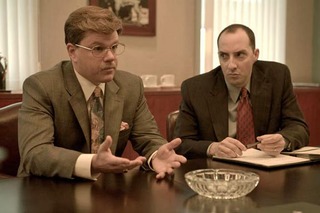 At home, Mark Whitacre (Matt Damon) has a business line and a personal line. You should know that because the FBI does, and so do his bosses at Archer Daniels Midland ("Supermarket To The World"™). Mark is pretty good at compartmentalizing his life, but the lines are about to get crossed a little bit.

Mark lives with his wife and kids in Decatur, IL, but he's been all over the world with ADM and he's proud of what they do, especially with corn. They make all kinds of stuff out of plain old corn, from high fructose corn syrup to lysine to ethanol -- all of which, you might say, are fuel additives, designed to juice up production of... whatever.

Celebrating ADM's miraculous line of alchemical products, Mark excitedly notes: "Corn goes in one end and profit comes out the other!" Vivid image, that. Kind of suggests Mark's chronic logorrhoea, the stream of partially digested thoughts that swirls around inside his head and occasionally gushes from his mouth. When he gets going his internal monologue (in voiceover) actually talks right over his lips and his tongue. He doesn't interrupt himself; his mouth and his brain just keep spilling over each other. I wouldn't be surprised if Damon's Mark Whitacre had a cousin named Jerry Lundegaard in Fargo.

I'm not going to tell you much of anything about the story of "The Informant!" but if you haven't seen it I recommend you do so before reading beyond this paragraph. This movie is a tonal tightrope act -- a satirical comedy (based on a true story -- really!) set in the early 1990s but done in the style of a '70s Michael Ritchie film (slightly fuzzy, washed-out Eastmancolor) with day-glo titles in post-psychedelic fonts and a zippy, cartoonishly orchestrated score by Marvin Hamlisch (Himself!) that channels Mancini and Esquivel. (Think of how the circus music cuts through Larry David's sitcom-of-discomfort "Curb Your Enthusiasm" and you'll have a sense of what Hamlisch's goofball muzak accomplishes here.)

His marquee-name movie star aside, Soderbergh has cast "The Informant!" with a few actors best known for their television series work (Scott Bakula of "Quantum Leap"; Melanie Lynskey of "Two and a Half Men") and surrounded them with comedians and stand-ups in virtually all the supporting roles: Joel McHale, Patton Oswalt, Paul F. Thompkins, Rick Overton, Scott Adsit, Tony Hale, Tom and Dick Smothers, Bob Zany... It's ingenious. The movie is about something quite serious -- a real-life whistleblower case that would normally be the stuff of Hollywood drama -- but it keeps tilting unsettlingly toward comedy. At its core, I think, it's about people who behave one way at home and another at work, and the difficulty of reconciling the two. Some corporate citizens do terrible, dishonest things on the job, but think those deeds don't follow them home (or vice-versa). They hug their kids, give to charity, convince themselves that they're not moral monsters because, after all, it's just business...

"The Informant!" would make a terrific double-bill with Michael Mann's "The Insider" (1999), or George Clooney's "Confessions of a Dangerous Mind" (2002), or Michael Ritchie's "Smile" (1975), or Bobby Ray's "Breach" (2007) and "Shattered Glass" (2003), or David Lynch's "Lost Highway" (1997), or Soderbergh's own "Erin Brockovich" (2000) or just about any '70s paranoia thriller -- "The Parallax View," "All the President's Men," "Three Days of the Condor." (It would play off splendidly against any of Damon's Bourne movies, too.) Each of them would highlight elements in "The Informant!" like an accompanying dish that brings out particular flavor profiles in a meal.

Apropos of almost-something early in the film, Marc thinks: "There should be a TV show about a guy who calls home one day -- and he's there. He answers -- he's talking to himself only it's someone else. He's somehow divided into two and the second one of him drives away and the rest of the show is about him trying to find the guy..." "The Informant!," in effect, becomes that show. (And if his description sounds somewhat familiar, think of "The Fugitive" combined with the Mystery Man [Robert Blake] in "Lost Highway": I'm at your house right now. Call me.)

What starts out as a tale of price-fixing and capitalist intrigue becomes another kind of mystery, the mystery of Mark. I mean, who is this guy? What is he doing and why is he doing it? We watch as the movie watches him watching himself be watched, and he watches his watchers. It becomes a voyeuristic exercise and an appreciation of Mark's ability to construct and reconstruct his identity on the fly. But how many of Mark's moves are scripted and how many are improvised, and does his left hand know what his right hand is doing? As the plot unravels, so does Mark, and the fun of the movie is watching for the tells -- the odd, unsettling and often perplexingly funny moments you just can't quite shrug off. Like the odd way he's positioned in the frame, recurring patterns in his language, the details he obsesses over, the way his hair moves almost imperceptibly when he touches it...

Richard Corliss wrote: "'The Informant!' says that people who do good or ill have complex motives for their actions, and that not everyone is knowable, instantly or ever." Funny. That's one hell of a mystery.