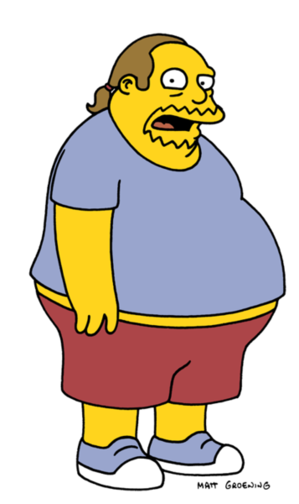 If you were at Comic-Con in San Diego, you could ride the unicorn from "Harold & Kumar Escape From Guantanamo Bay." You could learn about upcoming projects, most of them sequels and remakes. (They're making "Tron 2." Really.) You could listen to the creators of some of these things talk about what they've been working on and what they worked on and promoted at Comic-Con before.

Comic-Con is the new Sundance, the marketing event for people who want to be the first to know about things that other people will envy them for knowing because they knew about them first. (See my earlier ruminations on "Be the first on your block...") It's tempting to imagine the attendees as various mutations of the stereotype embodied by Jeff Albertson, aka Comic Book Guy, from "The Simpsons." As MSN TV Editor K.O. Pemberton writes from this year's event:

We told our cabbie on the way over that we would be the best smelling group he would have all day and that none of us live in our mother's basement. His deadpan comment back to us was, "Everyone is 300lbs plus. What the hell? What do they do all day?"

OK, that's pretty funny. Not fair, but an acutely observed generalization, nevertheless. (Can a generalization also be acute?) MSN Movies Editor Dave McCoy, an old friend, had his Comic-Con epiphany after seeing a wooden stake used by Buffy. Yes, the Buffy. And yet, it took Dave a couple days to figure out why he initially wasn't enjoying Comic-Con as much as he thought he should. His title for his blog post: "A snob out of water":

Here's the thing: I hate previews. I'm not a fan of trailers. I often close my eyes during them in movie theaters. In fact, I don't want to know ANYTHING about a movie before I see it (and being the editor of MSN Movies, that is fairly impossible). I am all about the final product. This is why I love film festivals. And as I'm finding out, it's why Comic Con, on a cinematic level, is doing nothing for me. I love seeing the fans and the costumes and the Gaslamp district of San Diego throws a great party. I love the "pop culture" nature of it. But when I get a call from [columnist Greg] Ellwood, asking if he should save me a seat at the "Watchmen" panel, I finally had to admit: No, I simply don't care. Call me next summer when it comes out.

I share those sentiments. Dave and I were talking about this on the phone the other night. When we go to film festivals and report on movies we've just seen, some of which won't be released for weeks or months (or, maybe, ever), it's because we like being able to see the films without knowing much of anything about them beforehand. (I filed a piece on this subject from Toronto last year: "What did I know and when did I know it?") The irony, of course is... if that's the way we feel about it, who are we writing for when we do festival coverage? My answer, which is the same for the writing I do about movies that are just being released, is: 1) for people who want to know enough about these movies to decide whether they want to see them when they do come out (which is why I do my very best to avoid spoilers); and 2) for people who, I hope, will come back to read what I've said
Advertisement
after they see the movie, to compare notes. (To me, that's the ideal readership.) It's not for bragging rights -- as it is for some Hollywood gossip columnists who like to report that they've seen earlier screenings, if only to one-up their fellow gossip columnists.

And yet... And it is fun to get in on the ground floor of a phenomenon (or potential phenomenon). When "E.T." came out, it was supposed to be Steven Spielberg's little, personal move. I saw it at a sneak preview open to the public. I'm so glad I did. Within a few weeks, people who hadn't even seen it were sneering because it had become so big. There was no way they could bring themselves to like it because they were watching it through the tainted lens of pop-culture hoopla. They could no longer just see what was on the screen. They could no longer be surprised. The movie didn't seem fresh anymore.

I'm curious to know what you think about all this. Me, I can't help but read film festival coverage and (some) reviews -- at least to get the gist of them. (As I mentioned the other day, I read the introductory paragraphs of a "Hellboy II" review, then stopped when it got to talking about the movie itself because I haven't seen it yet.) What about you? Can you recall seeing a movie early and later finding that others couldn't separate it from its reputation (whether it was a success or had gained a reputation as a flop)? Has a movie ever been ruined for you because of this? Or have you revisited it years later, after the hype has died down, and found that the movie was either a lot better or worse than it had seemed at the time? Have you ever been to Comic-Con? What do you make of it? How much do you want to know about the long-gestating "Watchmen" before you see it?