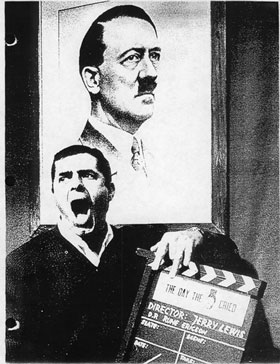 It's the hottest thing in contemporary cinema -- after superhero movies and pirate movies, that is! I refer, of course, to movies about clowns in Nazi concentration camps! Who doesn't adore that genre? Let's see, there's Jerry Lewis's infamous, unreleased "The Day the Clown Cried" (wince), Robin Williams in "Jakob the Liar" (cringe), and Robert Benigni's cuddly and zany, Oscar-winning "Life is Beautiful" (projectile vomit). Holocaust hilarity ensues! Now The Guardian reports, in an item with a fantastic headline ("Schrader to direct death camp clown tale" -- sounds like a great name for a Northwest band) that Paul Schrader will direct Jeff Goldblum in an adaptation of Israeli writer Yoram Kaniuk's novel "Adam Resurrected," about a clown who entertains Jews on their way to the gas chambers. Actually, Schrader (writer of "Taxi Driver" and "The Last Temptation of Christ," director of "American Gigolo," "Mishima: A Life in Four Chapters" and "Light Sleeper," among many others) may have exactly the right sensibility for this project because he has virtually no sense of humor. In this case, that would likely be an asset.

A notorious 1989 Spy magazine article about Lewis's legally locked-up death-camp slapstick project quoted Harry Shearer, one of the few who has actually seen a cut of "The Day the Clown Cried":

With most of these kinds of things, you find that the anticipation, or the concept, is better than the thing itself. But seeing this film was really awe-inspiring, in that you are rarely in the presence of a perfect object. This was a perfect object. This movie is so drastically wrong, its pathos and its comedy are so wildly misplaced, that you could not, in your fantasy of what it might be like, improve on what it really is. "Oh My God!"—that's all you can say.

The original writers, according to a Wikipedia entry, will never allow the film to be released "in part due to changes in the script made by Lewis which made the clown more sympathetic and Emmett Kelly-like." (You can read the script yourself here.) Well, it could have been worse. Lewis could have made the character more Robin Williams-like or Roberto Benigni-like....

What do you think about Clowns and Nazis? Has anybody made it work? If so, how? Is it a good idea to play the Holocaust for sentimental humor, as opposed to, say, satirical humor -- as in Lubitsch's "To Be or Not To Be" -- made while the war was still raging, and the outcome uncertain, in 1942? (Now that was a gutsy movie.