Chigurh: It's all about the money 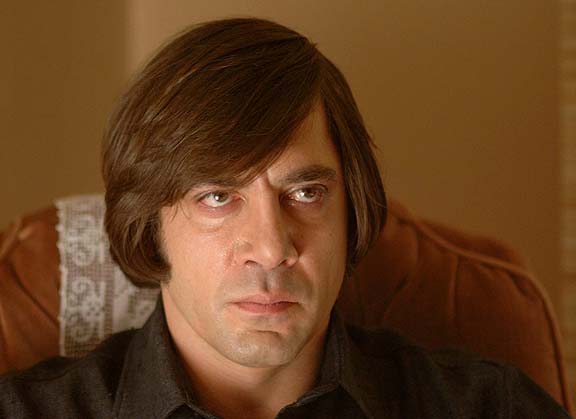 In an early post about "No Country for Old Men," I wrote that Chigurh could be seen as the embodiment of capitalism (or materialism) run amok: "Perhaps if Chigurh needs to be reduced to an 'emblem' of something, it's ruthless, indifferent force in the single-minded pursuit of any goal (religious, financial, political, genocidal)." The satchel of money is the MacGuffin (and the film doesn't pay much attention to what happens to it in the end)... but it's also a satchel full of money.

It's not the first time the Coens have made a movie about blind greed but "No Country for Old Men" certainly is their strongest take on this theme yet. Thus it feels very odd to me how this whole sense of impervious capitalism has been neglected in the discussion around the movie.

"No Country for Old Men" is all about money and money taking the place of moral principles. Chigurh sees himself as someone whose job is to make people see their blind greed. The coin toss is there to point out how money in general decides people's fates. He ends up there just like the coin does, as he states to Carla Jean in the end. Chigurh has principles and is not bound by money -- until this point.

Carla Jean refuses to let the coin decide. But when Chigurh leaves her house, he is seen checking his boots for traces of blood. This means he has taken destiny in his own hands because he wanted to kill. Chigurh has now become The Decider. He has traded his position as the grim reaper for his own pleasure.

When Chigurh drives away, he is portrayed in an all new way. The scene has almost post-coital languor to it. He seems to look at the world in all new way. Not functionally but experientially. And then the cars collide. Chigurh no longer has the shield of fate and is left wounded and helpless like any other person would be. He's certainly accepted his new situation since he pays the boys to be silent. Remember: this man surely hasn't worried about people seeing him previously. And every time he has had to go to a shop (gas station, drug store) Chigurh has found ways to get things free. Yet he's now buying a shirt from the boys. He buys things and services just like everyone else.

The final shot of Chigurh is chilling. In the year 1980 The Death himself sold his principles and disappeared to venture the world not bound by any moral obligations -- right in the heart of quiet suburban area glowing in the golden colours of sunset.