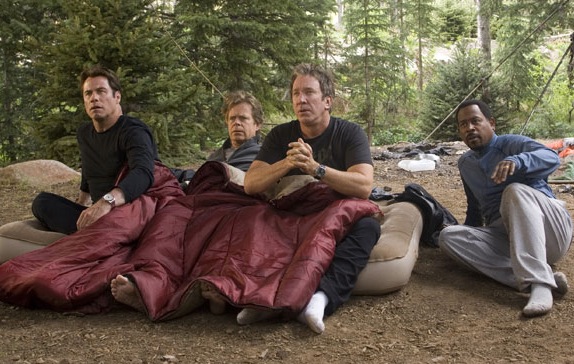 Two of A.O. Scott's reviews today in the New York Times had me laughing out loud. From "Wild Hogs":

The main thing about these guys — the main source of the movie’s fumbling attempts at humor — is that they’re not gay. Really. Seriously. No way. They may worry about people thinking that they’re gay, and they may do things that might make people think that they’re gay — dance, touch one another, take off their clothes, express emotion — but they’re absolutely 100 percent not gay. No no no no no no. No sir, I mean, no ma’am. That’s what makes it funny, see.

After camping out one night, for example, they have a conversation that’s overheard by a highway patrolman (John C. McGinley) who decides, based on his misunderstanding of the perfectly innocent things they’re saying, that they must be gay. But the thing is — get this — he’s the one who’s gay! You think he’s a stereotypical homophobe, but he turns out to be a homophobic stereotype. It’s magic!

Don’t be fooled though. Underneath the surface of racial and sexual button pushing, behind the brandished guns and bared breasts, is a heart of pure, buttery cornpone. Like “Hustle & Flow,” “Black Snake Moan” joins a dubious stereotype of black manhood to an uplifting, sentimental fable. In the earlier movie the hero was a soulful pimp with dreams of hip-hop glory.

This time he is a retired blues singer with woman troubles and a vegetable farm. Really, though, the character, played with his usual fearsome wit by Samuel L. Jackson, is a tried-and-true Hollywood stock figure: the selfless, spiritually minded African-American who seems to have been put on the earth to help white people work out their self-esteem issues. No doubt “Black Snake Moan” is a provocative title, but a more accurate one might be “Chaining Miss Daisy to the Radiator in Her Underwear.” [...]

To their great credit, Mr. Jackson and Ms. Ricci understand that the relationship between Lazarus and his prisoner has its comic side, and some of their scenes together... play out like kinky screwball. Whether Mr. Brewer is in on the joke is less clear.

That's the way I felt about most of "Hustle & Flow," which was phony and ludicrous in ways I wasn't sure the filmmakers were intending -- especially when it came to the relationships between the pimp and his sex slaves, and the little white guy giving the pep talk about telling the story of " The Black Man."