An American Carol: Anybody seen it?

"All the really good suicide bombers are gone," laments a trio of bumbling Afghan terrorists early on in "An American Carol," and that's about the high-water mark for humor in this jaw-droppingly awful political comedy from veteran spoofer David Zucker. 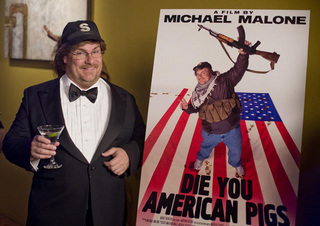 After "An American Carol" opened in some cities last week, RogerEbert.com received a few insinuating inquiries from readers asking why we did not publish a review of the film , a biographical musical celebration of the beloved wide-mouthed Broadway star of "Hello, Dolly!". The comedy, directed and co-written by David Zucker ("Airplane!"), is a conservative re-telling of Dickens' "A Christmas Carol, with a fat, unscrupulous, bespectacled, baseball-capped, America-hating documentarian named Michael Malone (played by the late Chris Farley's brother Kevin) as the Scrooge figure. Our correspondents suggested that, because the movie's politics reportedly tilted to the right, perhaps the liberal falafel-loving media establishment was deliberately ignoring it. (Meanwhile, the conservative corporate media establishment was evidently off celebrating a lonely cinematic triumph in a quiet place.)

Oddly, we did not receive a single comment or e-mail asking why we did not carry a review of "Beverly Hills Chihuahua," the Number One Movie of last weekend, but the reasons are the same: neither "An American Carol" nor "BHC" were screened for critics. That is usually the studios' way of ensuring that reviews do not appear on opening day. If any critic-type person still wants to cover it, he or she can simply buy a ticket to a show on Friday or Saturday and file a notice over the weekend.

RottenTomatoes lists 65 reviews for "Beverly Hills Chihuahua" (27 positive), 119 for "Nick & Norah's Infinite Playlist" (85 positive), and 28 for "An American Carol" (4 positive), all of which opened the same day.

To help fill in the critical information gap, are some excerpts from the few higher-profile "American Carol" reviews I could find, some of which are kind of funny. The first one is from a review RT.com categorizes as "fresh":

Never mind that the movie's political messages are as pinheaded and weak as those it attacks. Zucker is in fine form with his kitchen sink approach to comedy, and he slaps enough gags on the screen that even though only about a third stick, there's hardly a five-minute stretch where you're not chuckling.

The film seems intent to offend, complete with such right-wing fanatic fantasies as general George S. Patton gunning down a courtroom full of ACLU lawyer zombies and that Bold, Fresh Piece of Humanity Bill O'Reilly slapping Malone around. Zucker also pokes fun at suicide bombers (the training video is a howler), ex-hippie college professors and, most cheaply, masculine lesbians.

Even if it weren't three years too late to parody Moore (ineptly played by Kevin Farley), Moore's ridiculous tribute to Cuban health care in "Sicko" is far funnier than anything in this desperately laughless farce from David Zucker ("Scary Movie 3").

There is, however, a spectacularly tasteless scene in which George Washington (a waxworks Jon Voight) gives "Michael Malone" a tour of the World Trade Center ruins -- which I don't think was intentionally supposed to be funny.

In an interview with the Los Angeles Times, director David Zucker said distributor Vivendi Entertainment did not screen "An American Carol" in advance for reviews because "those [who] don't like the politics will tend to label the film as `not funny.' '' The implication, of course, is that movie critics are a pitchfork-and-torch mob of raging leftist liberals who will tear down anything that opposes their personal ideologies.

But I can't imagine anyone -- Democrat or Republican, liberal or conservative, red-state or blue-state, earthling or E.T. -- finding "An American Carol" anything other than ''not funny.'' And idiotic. And demeaning. And aggressively, persistently crummy.

Bad enough to earn a rare spot on my hallowed list of ''The Worst Movies I've Ever Seen"...

Is there any filmmaker alive, whether Democrat or Republican, conservative or liberal, capable of producing a truly incisive, intelligent satire about our politically polarized times?

Not Ben Stein, who checked his dry wit at the door when he made the anti-Darwinist, pro-creationist diatribe "Expelled." Not Bill Maher, whose " Religulous" revealed an intolerance equal to that of any religious zealot. And certainly not David Zucker, the director and co-writer of the blatantly right-wing comedy "An American Carol." With this hamfisted, haranguing film, Zucker joins the ranks of those who are so convinced of their own correctness, so full of hatred for anyone with other views, that they've crossed the line from humorists to dogmatists.

Box Office Mojo reports that "An American Carol" is playing on 1,639 screens (only one within the city limits of Seattle, where I live). It features appearances by Kelsey Grammar, Jon Voight, Dennis Hopper and Leslie Nielsen. It's taken in more than $4 million in its first six days of release. I intended to go, but I've been stuck at home expectorating various shades of green sputum for the last week. Has anybody seen it? Care to contribute a thoughtful critical assessment? I'm relying on you, the heroes of Colbert Nation....