“Airplane!” is a comedy in the great tradition of high school skits, the Sid Caesar TV show, Mad magazine, and the dog-eared screenplays people's nephews write in lieu of earning their college diplomas. It is sophomoric, obvious, predictable, corny, and quite often very funny. And the reason it's funny is frequently because it's sophomoric, predictable, corny, etc. Example:

Doctor (Leslie Nielsen): I am serious. And don’t call me Shirley.

This sort of humor went out with Milton Berle, Jerry Lewis, and knock-knock jokes. That's why it's so funny. Movie comedies these days are so hung up on being contemporary, radical, outspoken, and cynically satirical that they sometimes forget to be funny. And they've lost the nerve to be as corny as “Airplane!” — to actually invite loud groans from the audience. The flop “Wholly Moses,” for example, is no doubt an infinitely more intelligent comedy—but the problem was, we didn't laugh.

“Airplane!” has a couple of sources for its inspiration. One of them is obviously “Airport” (1970) and all of its sequels and rip-offs. The other might not come immediately to mind unless you're a fan of the late show. It's “Zero Hour” (1957), which starred the quintessential 1950s B-movie cast of Dana Andrews, Linda Darnell, and Sterling Hayden. "Airplane!" comes from the same studio (Paramount) and therefore is able to cheerfully borrow the same plot (airliner is imperiled after the crew and most of the passengers are stricken with food poisoning). The “Zero Hour” crisis situation (how to get the airplane down) was also borrowed for the terrible “Airport 1975,” in which Karen Black played a stewardess who tried to follow instructions radioed from the ground.

“Airplane!” has two desperate people in the cockpit: Julie Hagerty, as the stewardess, and Robert Hays, as a former Air Force pilot whose traumatic war experiences have made him terrified of flying. (The cockpit also contains a very kinky automatic pilot … but never mind.)

The movie exploits the previous films for all they're worth. The passenger list includes a little old lady (like Helen Hayes in “Airport”), a guitar-playing nun (like Helen Reddy in “Airport 1975”), and even a critically ill little girl who's being flown to an emergency operation (Linda Blair played the role in “Airport 1975”). Predictable results occur, as when the nun's guitar knocks loose the little girl's intravenous tubes, and she nearly dies while all the passengers sing along inspirationally.

The movie's funniest scene, however, occurs in a flashback explaining how the stewardess and the Air Force pilot first met and fell in love years ago. The scene takes place in an exotic Casablanca-style bar, which is miraculously transformed when somebody's hurled at the jukebox and it starts playing "Stayin' Alive" by the Bee Gees. The scene becomes a hilarious send-up of the disco scenes in “Saturday Night Fever,” with the young pilot defying gravity to impress the girl.

“Airplane!” is practically a satirical anthology of classic movie clichés. Lloyd Bridges, as the ground-control officer, seems to be satirizing half of his straight roles. The opening titles get an enormous laugh with an unexpected reference to “Jaws.” The neurotic young pilot is talked back into the cockpit in a scene from “Knute Rockne, All American.” And the romantic scenes are played as a soap opera. None of this really adds up to great comic artistry, but “Airplane!” compensates for its lack of original comic invention by its utter willingness to steal, beg, borrow, and rewrite from anywhere. 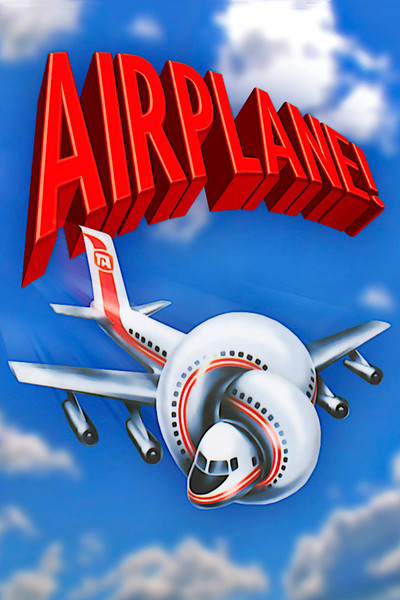 Howard Jarvis as Man in Taxi