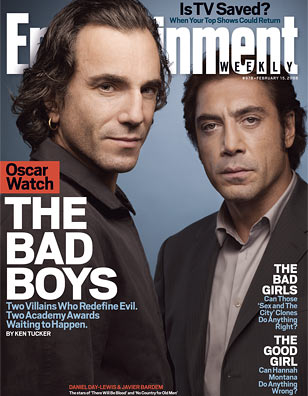 I know, I'm sorry, that's two Entertainment Weekly covers in a row, but how was I supposed to avoid mentioning this? Where's the YouTube mash-up? I'd make it myself, but I don't really want to. I never thought of Anton Chigurh or Daniel Plainview as "Bad Boys," but...

Like the chess-playing avatar of Death in Ingmar Bergman's "The Seventh Seal," to whom he has been compared, Chigurh exhibits the occasional glimmers of personality -- pride, arrogance, annoyance, determination -- as do Zodiac and Plainview, but he never succumbs to the latter's fits of dudgeon. He kills not from anger, or even for money, but because it is his nature. Plainview is a petty bully, his unmanageable fury a sign of weakness that Chigurh would consider frivolous and self-indulgent. (That said, let no one suggest a "Chigurh vs. Plainview" sequel, please.)

The "Alien" and "Predator" franchises are owned by Fox. Both "NCFOM" and "TWBB" are Miramax/Paramount Vantage releases (and they were both shot in Marfa, TX!). Will Javier Bardem's and Daniel Day-Lewis's people return the studio execs' phone calls?

The EW story says: "The face-off will never happen, of course. Nor will any sequels, no matter how popular Anderson's and the Coens' movies become. There will be no 'Chigurh Rising.' No 'There Will Be Blood II: Oil Be Back!'"

Ken Tucker's article sometimes takes a jokey approach to the films ("Brrrr, it's even creepier when he puts it that way, isn't it?"), but also sincerely tries to explain the origins of the uncomfortable laughter they have provoked. And they do provoke uncomfortable laughter -- from people who are on their wavelength -- and smug laughter from those who misread them:

Both of these intense movies inspire a different kind of laughter among many viewers: a mingling of surprise, shock, disbelief (if you don't buy into the films) and/or elation (if you do). Ditto their makers. Ethan Coen meant it as a compliment when he told us he finds Blood ''really funny.''... I even heard chortles of surprised pleasure during No Country's trailer, when a car explodes on a street as Bardem's Chigurh walks serenely into a drugstore, oblivious to the effect his mischief has elicited, hell-bent on his mission while all those around him yelp and scamper.

I have to interject here: Chigurh is not "oblivious" in this scene (and he has never had a moment of serenity in his life). He's obviously aware of the havoc he's just unleashed. He's caused it to distract everyone else, so he can focus on getting what he needs from the back of the store. Yes, he never blinks. But he's neither "serene" nor "oblivious."

The laughter provoked by "There Will Be Blood" comes in sharper barks; it's more pop-culturally complex. For all the rave reviews the movie has attracted, there's been some skepticism, especially about the movie's final moments... [Spoilers removed.]

... [W]e, as viewers, are challenged either to stay the course on Mr. Anderson's wild ride or to hop off, shaking our heads in hooting disbelief. One way to defuse the discomfort Anderson and Day-Lewis clearly intended here is to snicker at it — to mock it in a hip/ironic way that the movie itself, to its great credit, assiduously avoids.

Again, I think this represents a slight misreading of what's going on. Anderson describes "TWBB" as a "horror film" ("a story that was only going to be a downward spiral," drilling down to a single point), and horror films almost always elicit laughs and screams to vent the tension that builds up. The muddy confrontation between Eli Sunday (Paul Dano) and Plainview earlier in the film is, I think, its most brutal and horrific moment. (Although, on second thought, the sight of HW on the train as it pulls out of the station may be more wrenching.) The baptism scene and the milkshake scene are designed to play as comedy, though sometimes I wonder if we're laughing at the out-of-whack character or the over-the-top actor. They're not straight comedy, but the tension they generate is meant to make you laugh and cringe at the same time -- in the first case at Plainview's response to his humiliation; in the second to the way Plainview turns the earlier scene around on Eli), then you're missing the movie.
As Sheriff Ed Tom Bell says: "That's all right, I laugh myself sometimes. There ain't a whole lot else you can do."

P.S. A great quote from the EW interview with Bardem:

"Maybe the character's mother didn't feed him when he was 5 years old, or something like that.... I started to do that [imagining a "backstory" for Chigurh], but then I realized... in this case, it would be much more helpful if I didn't know where he was coming from. The challenge was to embrace a symbolic idea and give it human behavior. It wasn't about how his mother didn't feed him."

Jack Nicholson explains the Oscars for you