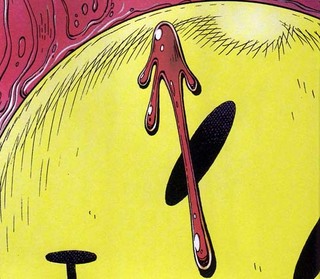 "Watchmen" creator Alan Moore would probably disagree with my argument for taking superhero movies seriously. He vehemently distances himself from any movies based on his own work. In an interview with Wired, the 55-year-old comic-book veteran suggests that fans have been taking superhero pulp fiction too seriously for too long:

I have to say that I haven't seen a comic, much less a superhero comic, for a very, very long time now--years, probably almost a decade since I've really looked at one closely. But it seems to be that things that were meant satirically or critically in "Watchmen" now seem to be simply accepted as kind of what they appear to be on the surface. So yeah, I'm pretty jaundiced about the entire "caped crusader" concept at the moment. [...]

(Is he honestly saying he isn't commenting on the relentlessly un-ironic "The Dark Knight"?)

I was hoping naively for a great rash of individual comic books that were exploring different storytelling ideas and trying to break new ground.

That isn't really what happened. Instead it seemed that the existence of "Watchmen" [1986-87] had pretty much doomed the mainstream comic industry to about 20 years of very grim and often pretentious stories that seemed to be unable to get around the massive psychological stumbling block that "Watchmen" had turned out to be, although that had never been my intention with the work. [...]

When I found myself working, even remotely, under the auspices of DC, I had very different intentions. Well, maybe they were the same intentions: to do progressive comics that adults could enjoy. But by then I'd become very tired of the wave of grimness that seemed to have been unleashed by "Watchmen."

When I was working upon the ABC Books [America's Best Comics -- a satirical name if ever there was one], I wanted to show different ways that mainstream comics could viably have gone, that they didn't have to follow "Watchmen" and the other 1980s books down this relentlessly dark route. It was never my intention to start a trend for darkness. I'm not a particularly dark individual. I have my moments, it's true, but I do have a sense of humor. With the ABC books I was trying to do comics that would have perhaps appealed to an intelligent 13-year-old, such as I'd been, and would still satisfy the contemporary readership of 40-year-old men who probably should know better. But I wanted to sort of do comics that would be accessible to a much wider range of people, and would still be intelligent even if they were primarily children's adventure stories, such as the Tom Strong books. [...]

But it was a change of emphasis. I didn't want to spark off another wave of frankly miserable stories about psychotic vigilantes battling it out with equally psychotic villains. I wanted to do stuff that had a fresher feel to it, had a bit of a morning atmosphere. And I think, to a degree, we succeeded, but of course it all ended in tears.

I remember the comics of my childhood (and, apparently, Moore's -- since he's only four years older than me) being awesomely melodramatic and corny/campy/ironic at the same time. Although my memories of "Watchmen" are mostly grim, it serves one well to recall that the signature image is a blood-stained smiley face. And, yes, I've started re-reading it... and I don't know if I'm going to be able to stop. What's striking me so far is how wildly, satirically funny it is; how specifically rooted in the comics of the 1960s and the politics of the 1970s and 1980s; how clever and flamboyant the visual movie references are (from "Citizen Kane" to "Blade Runner" -- they explain the story long before the plot does); and how British some of the terminology is. I wonder if the bullies in the movie call young Walter Kovacs a "whoreson"... And I wonder what anyone unfamiliar with the Nixon and Reagan administrations (and the Soviet invasion of Afghanistan) makes of the "Watchmen" comics. How much of the original Cold War political context has been incorporated into the 2009 movie?

Moore explains his theories about the peculiarly American nature of superheroism at Total Film -- something explicitly reflected in the portrayal of "Watchmen"'s big blue Dr. Manhattan, America's superweapon:

I've recently come to the point where I think that basically most American superhero comics, and this is probably a sweeping generalisation, they're a lot like America's foreign policy.

America has an inordinate fondness for the unfair fight.

That's why I believe guns are so popular in America -- because you can ambush people, you can shoot them in the back, you can behave in a very cowardly fashion. Friendly fire, or as we call it everywhere else in the world, American fire. [...]

I believe that the whole thing about superheroes is they don't like it up them. They would prefer not to get involved in a fight if they don't have superior firepower, or they're invulnerable because they came from the planet Krypton when they were a baby.

I genuinely think it's this squeamishness that's behind the American superhero myth. It's the only country where it's really taken hold. As Brits, we'll go to see American superhero films, just like the rest of the world, but we never really created superheroes of our own.

And as Londoners, when we had that little bit of bother on the 7th July, 2005 - after America had two big buildings blown up... Terrible shame, but we had a lot more than two buildings blown up during the '40s when America was providing most of the munitions to Hitler...

But when it happened in England, what was the reaction of the American forces on the 8th of July, as soon as those bombs went off? They pulled the American servicemen outside of the M25, because London was too dangerous for the armed and trained American military men.

Then after a few days, they thought, actually, this does look kind of bad, even for America, let's creep back into London and pretend we've been here all the time....