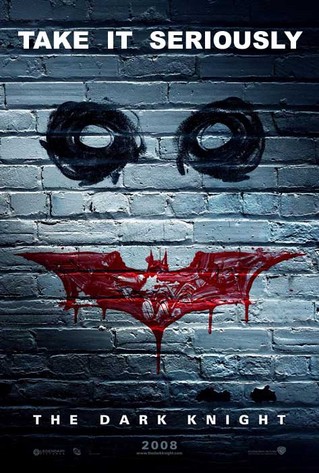 If I say that I'm not much of a fan of comic-book or superhero movies, it's not because of the source material but because of the movies made from them. Comics fans haven't been as ill-served by the movies as video gamers, but I've noticed that even some of the most fervent appreciations of "The Dark Knight" carry an undertone of defensiveness, almost as if surprised that the filmmakers would treat this "crusader in tights" material seriously, instead of as camp. (Let's just not mistake "serious" for "dreary" or "pedantic.")

"The Dark Knight" has been praised as "the best superhero ever made" -- or even "the first great superhero movie," but even if I thought those things were true, they sound like backhanded praise to me. How sad would it be if it took until 2008 for somebody to claim they'd seen "the first great horror movie" or "the first great comedy," to name a couple other still-disreputable labels? As I've said, I don't think "TDK" is an exceptionally strong or resonant movie, but it never occurred to me to think less of it because it's about characters named Batman and the Joker.

The way I look at it, a metaphor is a metaphor. Batman or the Joker or Spider-Man can become cinematic metaphors as rich and evocative as Achilles or Nosferatu or Carrie or Jesus. Why not?

Here's an excerpt from an intro to an online selection of Roger Ebert superhero movie reviews (circa "Superman Returns," with an emphasis on origin stories) that I wrote in 2006. It's called, with deliberate self-consciousness, Superheroes: Men in tights":

Superheroes may have been born in comic books, but they were made for the movies. Defying the laws of physics, and occasionally the laws of society, they tend to be transgressors whose supernatural powers (or costumes and gadgets) enable them to surpass the abilities of mortals when it comes to maintaining stability and order -- or, at least, exacting revenge -- whether they act on behalf of themselves or society (or the cosmos) at large. "Truth, justice and the American Way," as the Man of Steel might put it.

Sometimes, too, they are conflicted. They can't just deny their gifts and live ordinary lives (see "The Last Temptation of Christ"), much as they may yearn to. As Peter Parker learns, with great power comes great responsibility. But their gifts may also be a curse, their super-powers and personae having resulted from some great personal tragedy or accident -- the death of parents or the destruction of a planet, or even both. A birth myth is indispensable in such cases.

So, it's not just about the "skills," in non-superhero Napoleon Dynamite's term. Superheroes may be driven by deep psychological wounds that will never quite heal. And sometimes capes and tights are the only dressing that works.

Because their identities must be concealed, and they can only fly free and express themselves fully while in costume, it's no wonder superheroes are often seen as metaphors for closeted gays in a hostile world. (Yes, this was part of the mythos long before "Superman Returns.") And superheroes tend to discover, and learn to master and control, the full extent of their powers in adolescence, along with their sexuality. (Think of the Midwestern section of "Superman," with young Clark Kent learning discipline on the farm, and the high school football field.)

Ryan Somers, a RogerEbert.com reader and admirer of the "Max Payne" game, wrote in: "I found myself understanding why one might have trouble classifying video games as art -- especially when all one sees of the medium are the films they inspire...."

Somers offers some good advice, and although he's talking specifically about video games, I think what he says applies in some respects to all kinds of movies, no matter what their source material:

Many are thought-provoking, moving works that include first-rate scripts, professionally motion-capped acting, awe-inspiring "set" construction, and a narrative flow that differs from good film only in that a player guides the main character along to more immersively experience the events on screen, events which are ultimately controlled by the artists behind the scenes. Please, don't let one medium influence your opinion of another....