"Through my films I'm eventually trying to one day tell the truth. I don't know if I'm ever going to get there, but I'm slowly letting pieces of myself out there and then maybe by the time I'm 85, I'll look back and say, 'All right, that about sums it up.'" -- Adam Sandler, interview clip used in the 2012 Oscar broadcast

As a moviegoer and a critic, all I care about is what's on the screen -- or isn't. But there's so little on the screen in Adam Sandler movies, that I confess I'm bewildered at what some claim to see in them. So, if you're curious about, say, how the production cost of the average Adam Sandler comedy jumped from about $30 million to about $80 million overnight... well, just keep reading.

The so-called "flop" of "That's My Boy" this past weekend (Sandler's second after "Jack and Jill" -- almost a trend!) has been greeted with schadenfreude in some quarters, but it disregards the likelihood that financial arrangements have long been in place that ensure a Sandler movie has to really, seriously tank before it winds up actually losing money.* Who knows -- there may be the equivalent of credit default swaps that protect Sony and Happy Madison from disappointing returns. I wouldn't be surprised to learn that there are investment devices that allow the backing companies to actually make money by placing wagers predicting the underperformance of a given movie, just to hedge their bets. Everybody wins, right?

As somebody who's never been able to sit through an entire Adam Sandler movie except for the ones that aren't really "Adam Sandler movies" because they were directed by filmmakers who have achieved employment and success independent of him (Paul Thomas Anderson's "Punch-Drunk Love," James L. Brooks' "Spanglish," Judd Apatow's "Funny People"), this kind of thing had never occurred to be before. Until this week, when I saw Mike Stoklasa and Jay Bauman's two-part, 58-minute, beer-swilling vivisection of Sandler's 2011 "Jack and Jill."

But first, I know what you're thinking (and so do Mike and Jay): After all these years, who can get worked up about another dumb, disposable Adam Sandler movie? Well, some people obviously can, but why bother? Until the R-rated "That's My Boy," he has made PG and PG-13 movies for pre-pubescent and recently post-pubescent tots, the movie equivalents of gross-out Garbage Pail Kids. Now in his forties, Sandler is still remaking the same undemanding goofball comedies he's been churning out since he was in his twenties, about crude, infantile characters who behave like crude, infantile characters who are much younger -- which is the essence of the have-it-both-ways regression that has been his career hallmark. 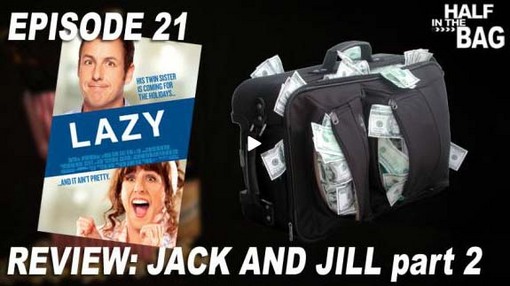 What some people see as a refreshingly down-to-earth lack of pretension, others perceive as contempt for the paying audience. But, c'mon. They're not trying to fool anybody. Surely Sandler and his pals know how dumb their farts and penises and boobs and pee and poop gags are! Most of the time they're not even gags -- they're just representations of farts and penises and boobs and pee and poop. Listen to the silly voices! It's all funny in an anti-humor way because they're not even bothering to construct jokes. It's the kind of thing you could do with your gang, too! (Actually, I can't guarantee that this much meta-thought has gone into the movies. If you want an quick laugh and you don't have a payoff, maybe it's just easier to insert a fart.)

I don't know any Sandler fans who came to him as an adult; they all seem to have been introduced to his early PG-13 movies when they were teenagers or younger. As Jay says, he first saw "Billy Madison" in high school when it came out on video. And he liked it. If he'd seen it for the first time today, he figures he would still enjoy some of it and that he wouldn't hate it like he does the Sandler movies of the 2000s. 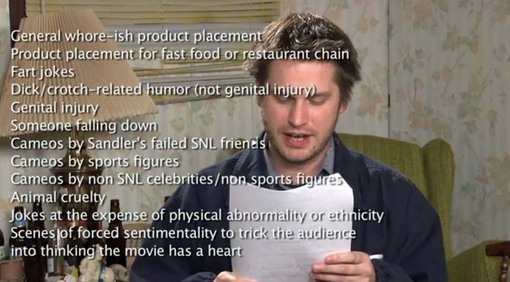 Mike and Jay spend a little time demonstrating how little craft and effort are apparent in "Jack and Jill." They each made a list of what they expected before they went in -- Jay's based on the other Sandler movies he's seen (things like "general whorish product placement," "animal cruelty," "someone falling down") and Mike's based on all the Sandler movies he has not seen, plus trailers and a general awareness of the "Jack and Jill" premise. They observe that the entire story is based on the idea that Sandler needs (for unknown reasons) to get the actor Al Pacino to appear in a Dunkin' Donuts commercial (which, actually, sounds surreal enough to intrigue me, but maybe not). They discuss how cheaply it is designed and photographed, using what look like "SNL" sets. They count the number of product-placement brands showcased (13!) and are at a loss as to why there's so little interaction between Sandler's twin characters, Jack and Jill.

They recount the number of fart gags (only 12) and "jokes at the expense of physical abnormality or ethnicity," aka "racist and cripple jokes." (Mike: "What we should mention is that 'Jack and Jill' is the most racist film since 'The Birth of a Nation.' ") They note that it contains one crafted joke that involves a set-up and delivering a payoff. Other than that, though, it's mostly farts, incontinence, hitting and falling down.

Again, someone can explain in detail how a picture doesn't follow conventional or traditional rules of movie craft -- and that's something worth doing if you care about movies -- but you either care or you don't. The second part of Mike and Jay's essay devotes 24 minutes to... well, first they need to read a note from their lawyer: "Adam Sandler is a hack fraud con man." No, that's not it: "We, Jay and Mike of 'Half in the Bag,' are not accusing Adam Sandler or his cohorts -- or his associates -- of any criminal wrongdoing. These are merely the opinions of Mike and Jay."

The $79 million question is, as Jay puts it: "At what point does something like this cease to be able to be called a 'movie.' And I think this is it." "Jack and Jill" cost more than half again as much as last summer's $50 million comedy "Crazy, Stupid, Love," which had more stars: Steve Carell, Ryan Gosling, Julianne Moore, Emma Stone... and yet, as Mike says, it looks like it was shot over the weekend. Maybe in somebody's garage. Jay says he he has nothing against product placement, but "Jack and Jill" seems to have been designed around the ads: "They literally stop the film to have commercial breaks." 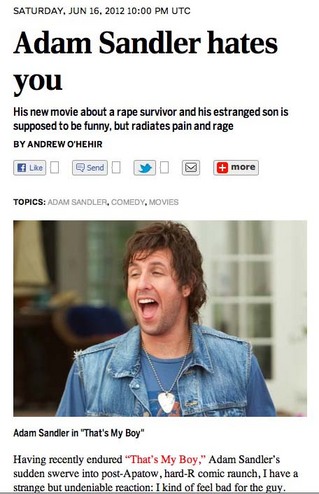 Eventually, they get into a tangled web of corporate connections behind the movie (though I think they're wrong about Coca-Cola, which sold Columbia Pictures to Sony in 1989, so while the company undoubtedly paid to put Coke in the movie, it wasn't because Coke owned Columbia). Does this prove that Sandler is a fraud or con man or anything other than a shrewd and powerful businessman? Decide for yourself.

I'm not really that interested in the deal structures supporting Sandler's films -- except in how they are reflected in the movies themselves. What I've always found perversely fascinating about Sandler's persona since "SNL" is that the humor itself is based on a bullying attitude, aimed downward from a position of imagined superiority to those who are weaker or have lower social status because of their looks or race or sex or other noticeable difference that, in his view, makes them less than "normal." And yet Sandler frequently tries to portray his own character as a benign nebbish or naïve victim, even if only in that unconvincingly sentimental, last-minute feel-good shift. Mike and Jay discuss how he tries to score cheap laughs with broad racial put-downs of Mexicans... by having a Mexican say them for no reason. How does he keep getting away with that sort of thing?

For me, Adam Sandler is summed up in the opening of "Funny People," when he rolls around, laughing hysterically while making prank phone calls. Such a practical joker! A lot of humor is based on hostility (see Groucho Marx, John Cleese, Andy Kaufman), and directors like P.T. Anderson love Sandler for his seething inner rage, but he picks on the already marginalized. So, his movies are certifiably mean, but too often at the wrong people's expense -- like the employees of that foreclosure mill who thought it was funny to dress up as, and make fun of, homeless people for Halloween last year.

Sandler's persona is that of a sociopath seething with repressed rage, which is what directors like Paul Thomas Anderson think is the source of his comic genius. But he's not an anarchic, subversive or liberating sociopathic force like, say, Harpo or W.C. Fields or even Borat. He's a staid, conservative figure whose only function is to assert his own dominance and confirm the values of the status quo. He's the kid on your block who picks on anyone "different" or with lower social status (because he can get away with it), sucks up and conforms to the powers that be, and then sets somebody's cat on fire to show what a good-humored, regular guy he is.

NOTE: I started writing this on Friday, when I expected "That's My Boy" to be another big Sandler hit. I had to revise it on Monday to reflect what happened over the weekend.

I'm genuinely curious about the strategy behind the construction of Sandler's screen persona, at least in his recent comedies: Why does he have to play a character who is universally agreed to be the coolest guy in the universe (except by squares and pussies)? Most comic actors from Charlie Chaplin and Buster Keaton onward have thrived on undercutting themselves, making themselves look flawed and silly. It's a way of engendering audience identification, of making us like them and root for their eventual triumph. Sandler seems to shoot in that general direction here, after playing rich, famous, successful and thoroughly impervious guys in his last several movies, but he can't pull it off.

Donny Berger of "That's My Boy" is halfway supposed to be an '80s loser, with a rusted-out Pontiac Fiero, a shag haircut and Van Halen on the tape deck. But even his mode of being a loser is awesome; he was once famous for being the kid who nailed (and impregnated) a hot teacher at his South Boston middle school, and now he's broke and his best friend is an enormous stripper called Champale. But exactly why Donny is broke seems a mystery, given that dudes of all social strata are drawn to his clarion call of "Whazzup!" and large-breasted women in hot tubs seem to find his juvenile sex talk irresistible....

Yes, you're right; I'm taking this all too seriously. Sandler's brand of comedy involves no crimes against humanity, and if people want to pay good money to watch him beat off to a picture of a polyester-suited grandma, I guess Chief Justice Roberts would say that's why we have the First Amendment. It's just that there's something bitter and weird and unsettling about the place where Sandler seems to be right now. He's definitely capable of better -- maybe not of great, but let's say of pleasant mediocrity -- and his current work feels like a classic cry for help. I'm not sure which possibility is worse: That his screen persona is completely cynical, calculated to appeal to the ultra-fragile egos of teenage boys, or that he actually needs this reassurance on a personal level, because he's a 45-year-old comedian doing jism jokes and hating himself for it.

* Sony president of worldwide distribution Rory Bruer said of the "That's My Boy" opening figures: "Sure we had hoped for more. It is a crazy, off-the-wall, raunchy R-rated comedy that audiences laugh like crazy at. Kudos for Adam mixing it up... We love being in the Adam Sandler business."

Fox's Filthy Rich Skates the Line Between Drama and Camp