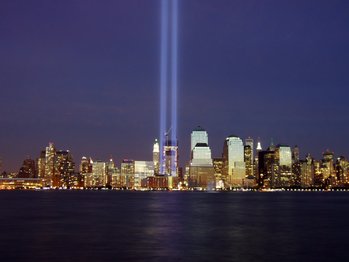 The power of images: A conscious attempt was made to answer the indelible destructive images of 9/11/2001 with a healing one in this Ground Zero memorial that was seen all over the world via the media (and could actually be seen by satellites from space).

Following up on my posts about "Wag the Dog"/Jon Benet/Iraq & 9/11 and modern propaganda films:

As we approach the fifth anniversary of the atrocities of 9/11, I still think one of the most important yet least explored aspects of the day's attacks is how they were carefully designed and staged for the cameras. Deadly spectacles that everyone kept saying was "like a movie" actually were directed that way, as a horror/disaster movie with unforgettable psychological impact -- because it wasn't just a movie, it was real. The "terror" in "terrorism" is about spreading fear and panic, and the World Trade Center towers weren't just chosen because they were symbols of American riches and hubris, but because they were visual symbols that would make for spectacular and terrifying footage. The first plane guaranteed that the second would come as an even greater shock -- and would be caught by thousands of cameras. That was the way the perpetrators spread their murderous message: they intended to terrify not just the government but the population. And, initially, they succeeded. (Nobody looked more terrified on that day than Brave President Sir Robin, who bravely ran away, away, for most of the day: "When danger reared its ugly head / He bravely turned his tail and fled...")

So, the German composer Karlheinz Stockhausen (who called the WTC attacks "the greatest work of art ever" -- later changing it to "Lucifer's greatest work of art") was pilloried for being insensitive (and he was), while his larger point was ignored.

British artist/provocateur Damien Hirst elaborated a bit more in 2002, but it was still "too soon" for many, who thought his words sounded flip:

"The thing about 9/11 is that it's kind of an artwork in its own right. It was wicked, but it was devised in this way for this kind of impact. It was devised visually."

No matter what you think of his tone or his timing, I don't see how one can contest that.

Lawrence Wright's new book, "The Looming Tower: Al Qaeda and the Road to 9/11," explores this in greater detail than any reporting or analysis that has come along so far. A piece in Salon.com cites Osama bin Laden's role as "director":

At the heart of Wright's wide-ranging narrative is America's arch nemesis. "One can ask whether 9/11 or some similar tragedy might have happened without bin Laden to steer it," he says. "The answer is certainly not."

That's why I'm skeptical that a plot to blow up airliners somewhere in the middle of the Pacific is really the biggest plan out there. It's missing the visual aspect that is so effective at creating the fear and panic that lead to hysterical, reckless, wasteful, counter-productive and even self-destructive decision-making of the sort we've seen since 9/11. Politicians, no matter what their party affiliation (or lack of one), still haven't come to their senses.

And bin Laden himself used propaganda and mythmaking techniques to create a larger-than-life role for himself in the popular imagination. Salon continues:By exposing al-Qaida's clash with America, Wright also helps us see the road beyond it. His work reminds us that the consequences of the Iraq war, massive deficit spending on security and the military, and the degradation of America's moral standing fit bin Laden's goals. Indeed, when his terrorist organization officially trained its mass-murderous sights on the United States in the early 1990s, Wright explains, "al-Qaeda's duty was to awaken the Islamic nation to the threat posed by the secular, modernizing West. In order to do that, bin Laden told his men, al-Qaeda would drag the United States into a war with Islam -- 'a large-scale front which it cannot control.'" [...]

... [Bin Laden was a man who] had long shaped aspects of his life after the prophet Mohammed's -- a man who, in Wright's view, would come to use political and religious mythmaking "brilliantly" in the service of his ominous cause. [...]

Bin Laden's move, Wright says, was emblematic of his "public-relations genius." Only by retreating from modernity and the corruption of society could bin Laden presume to speak for "the true Islam" and those who longed to restore its purity and dominion. "Inside the chrysalis of myth that he had spun about himself," Wright says, "he was becoming a representative of all persecuted and humiliated Muslims."That image was mostly hogwash, but it worked.

Equally scary is Wright's account of the ways in which the FBI, CIA and other law enforcement agencies let the 9/11 hijackers simply slip through their fingers:

The highly secretive National Security Agency, which was monitoring a pivotal al-Qaida phone number in Yemen that could have helped track Hamzi and Mihdhar, was as possessive of its information as the CIA, and equally unhelpful. Ironically, FBI agents investigating the 1998 embassy bombings had found the pivotal phone number in the first place. "This Yemeni telephone number would prove to be one of the most important pieces of information the FBI would ever discover," Wright says, "allowing investigators to map the links of the al-Qaeda network all across the globe." [...]

Still more astonishing, the CIA chose not to inform FBI investigators once they knew, by summer 2001, that Hamzi and Mihdhar had entered the United States. The FBI had an intelligence liaison with the CIA's "Alec Station" devoted to hunting bin Laden, but "the wall" still stood in the way. Even though another FBI analyst, Dina Corsi, was made aware of the information, she wasn't allowed to share it with the criminal investigators in her own agency.

By late August 2001, it did reach one of them, an FBI agent working with Soufan named Steve Bongardt -- when an urgent e-mail from Corsi was accidentally copied to him. Bongardt, one of several FBI sources Wright interviewed, called Corsi on the phone, incredulous. "Dina, you got to be kidding me! Mihdhar is in the country?" Following orders from on high, Corsi told him he had to delete the e-mail.

The next day, in a phone call with Corsi and a CIA supervisor from Alec Station, Bongardt was again told to "stand down" from any effort to track Mihdhar. Bongardt insisted that the intelligence should be shared, and that the wall was a misguided bureaucratic construction that was hurting the agents' mission. "If this guy's in the country, it's not because he's going to fucking Disneyland!" he said. In a follow-up e-mail to Corsi, he said, "someday somebody will die -- and wall or not, the public will not understand why we were not more effective."

Wright reports that several of his FBI sources strongly believed that the CIA shut them out because the CIA was interested in recruiting Mihdhar and Hamzi, having never been able to penetrate al-Qaida with an agent. If the FBI collared the two as terrorist suspects, the opportunity to recruit them as agents would have been lost to the more transparent criminal investigative process. The nearly 3,000 lives lost on 9/11, Wright suggests, was the net result of the CIA's strategy.

When are we going to see that movie?
Advertisement