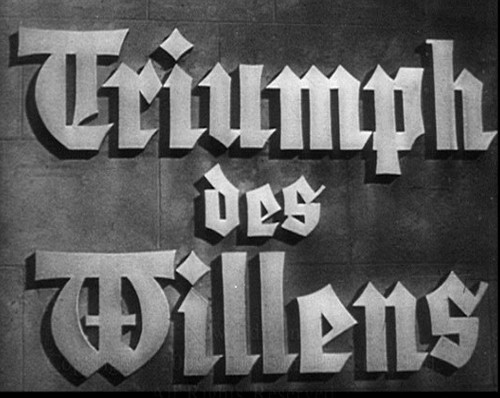 Title card from perhaps the most famous propaganda film of all time, Leni Riefenstahl's "Triumph of the Will" (1935). Hitler and the Nazis were repeatedly elected to power during the 1930s, one piece of government at a time, before Der Fuhrer assumed full-fledged dictatorial rule.

Edward Bernays, the founder of modern public relations, on the ways in which power is maintained in a democracy (as opposed to the much cruder, more conspicuous and therefore more vulnerable power held by totalitarian rulers), in his hugely influential 1928 book, "Propaganda":

The conscious and intelligent manipulation of the organized habits and opinions of the masses is an important element in democratic society. Those who manipulate this unseen mechanism of society constitute an invisible government which is the true ruling power of our country.... We are governed, our minds are molded, our tastes formed, our ideas suggested, largely by men we have never heard of. This is a logical result of the way in which our democratic society is organized. Vast numbers of human beings must cooperate in this manner if they are to live together as a smoothly functioning society.... In almost every act of our daily lives, whether in the sphere of politics or business, in our social conduct or our ethical thinking, we are dominated by the relatively small number of persons ... who understand the mental processes and social patterns of the masses. It is they who pull the wires which control the public mind.

Just a timely reminder about thinking critically in "every act of our daily lives": Every movie you see, every story you read (fiction or nonfiction), is to some extent propaganda. It's trying to sell you something -- an idea, a philosophy, a version of events, a vision of reality. Just try to be aware. Even this is propaganda, but it's true:

Eternal vigilance is the price of liberty—power is ever stealing from the many to the few…. The hand entrusted with power becomes … the necessary enemy of the people. Only by continual oversight can the democrat in office be prevented from hardening into a despot: only by unintermitted Agitation can a people be kept sufficiently awake to principle not to let liberty be smothered in material prosperity. -- Wendell Phillips (1852), Speeches Before the Massachusetts Anti-Slavery Society

So, what are some propaganda films you've seen recently, what do you think they were trying to sell, and how did they go about doing it? (And let's hear it for "Snakes on a Plane" for at least succeeding in undermining the myth of "airport security" -- which, we should all know by now, is but a flimsy facade designed to give us the illusion of being "safer," even though we aren't. Still, the odds against snakes or bombs or terrorists on a plane are pretty good, for reasons that have little to do with those increasingly lengthy security lines.)
Advertisement