Don't tell me you didn't see this one coming 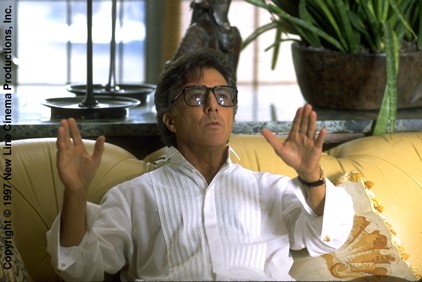 Dustin Hoffman doing a real Robert Evans impression in "Wag the Dog" (not at all like what Martin Landau did in "Entourage," which could never be mistaken for Evans).

It's enormously frustrating and stressful trying to live in three places at once, especially when they're: 1) the "reality-based community"; 2) the arena of critical thinking; and 3) America in the 21st century. So, who was surprised by this headline?

Prosecutors abruptly dropped their case Monday against John Mark Karr in the slaying of JonBenet Ramsey, saying DNA tests failed to put him at the crime scene despite his insistence he sexually assaulted and strangled the 6-year-old beauty queen.

Just a week and a half after Karr's arrest in Thailand was seen as a remarkable break in the sensational, decade-old case, prosecutors suggested in court papers that he was just a man with a twisted fascination with JonBenet who confessed to a crime he didn't commit.

Advertisement
The only difference between this story and innumerable others (like, say the non-case for invading Iraq) is how quickly and easily it unravelled (or, rather, evaporated), after the press and the public suddenly realized they'd never had any good reason to accept it as legitimate in the first place.

This isn't even a story I've followed, or had much interest in. (Sorry, the simple odds are that someone in the family did it and the others either don't know or have tried to protect him or her.) It's just another example of authorities jumping to unsupported conclusions and the yammering media following along.

Last week you couldn't avoid the headlines about how some guy had "confessed" to the Christmas JonBenet Ramsey at her parents' house in Colorado ten years ago. He said he was in love with her and he had a special relationship with the famous dead girl. And he said it when apprehended in Thailand on what authorities said was some kind of sex vacation. So, the evidence against him was... ? Nonexistent. And the authorities knew they had nothin' when they shipped him back to Boulder, only they didn't admit it until the DNA tests came back negative.

The first thing any lawyer knows is that the only thing less reliable than an eyewitness account is a confession. Neither are good for much of anything without solid evidence -- especially in a case like this, where a decade has gone by and the former "suspect" was known to be delusional by any definition. The cops said they arrested him because they thought he was on the verge of doing something bad with some young girls in Thailand, and it's good they may have prevented that. But will they even be able to make that charge stick? I doubt it. (It's like the way the Bush administration goes after "terrorists" -- randomly, usually arresting the wrong people, and doing it so clumsily that they couldn't prosecute them even if they were guilty. So, did arresting authorities even try to place their suspect at the scene of the crime before announcing they'd apprehended an obviously disturbed individual who'd "confessed" to this tabloid murder scandal? Did it matter that his brother said the guy had never missed Christmas with his family? Couldn't be too difficult to verify. This is why we're in Iraq, and why George W. Bush is still in the White House: People don't pay any attention to the reality-based world until it's too late.

I try to think critically, and to put events (including movies) in some kind of context. I think I'm even somewhat inclined by nature to do so, yet I don't always succeed. But when I hear, for example, that Saddam Hussein's refusal to produce weapons of mass destruction (or evidence of having destroyed WMD) actually confirms that he must be hiding them, I think: That's not even the most likely explanation. Of course he's not going to admit he has them, or doesn't have them. The only reason he's in power is because the US and neighboring countries believe he has them. If he reveals he doesn't (rather than play his usual bluff-the-West game), his power is so weak that he'll be invaded and overthrown in no time.

Or when I hear that the evidence in favor of an immediate pre-emptive invasion is either old (pre-1998) or inconclusive, I have to think: If that's all they can come up with, there must be some other reason for wanting to invade Iraq. (See: Grenada, Panama, the Falklands.) Or, if that's the best they can do, they're likely not capable of invading, occupying and stabilizing Iraq because they clearly don't know nearly enough about the place. Or, if they keep downplaying the idea of having a plan for success in Iraq, maybe the reason is that they don't think such a plan is important. So, maybe they don't have one. (OK, I confess I didn't make that last leap ahead of time. The reality was more absurd and unconscionable than I could have envisioned.)

I've been reading "Fog Facts," the 2005 book by Larry Beinhart (who wrote "Wag the Dog") and it's full of examples of how some stories (even some facts) that fit the official myths made it into public consciousness, while other more important facts -- though reported -- just never "stuck." I was reminded of Roger Ebert's review of Wag the Dog" from 1998. See if anything here strikes you:

So, why did we invade Grenada? A terrorist bomb killed all those Marines in Beirut, the White House was taking flak, and suddenly our Marines were landing on a Caribbean island few people had heard of, everybody was tying yellow ribbons 'round old oak trees, and Clint Eastwood was making the movie. The Grenadan invasion, I have read, produced more decorations than combatants. By the time it was over, Ronald Reagan's presidency had proven the republic could still flex its muscle -- we could take out a Caribbean Marxist regime at will, Cuba notwithstanding.

Barry Levinson's "Wag the Dog" cites Grenada as an example of how easy it is to whip up patriotic frenzy, and how dubious the motives sometimes are. The movie is a satire that contains just enough realistic ballast to be teasingly plausible; like "Dr. Strangelove," it makes you laugh, and then it makes you wonder. Just today, I read a Strangelovian article revealing that some of Russian's nuclear missiles, still aimed at the United States, have gone unattended because their guards were denied bonus rations of 4 pounds of sausage a month. It is getting harder and harder for satire to stay ahead of reality.

Advertisement
In "Fog Facts," Beinhart uses simple, on-the-record, uncontested facts to topple the prevailing myths about contemporary "stimulus-package" (formerly known as "trickle-down") economics, Iraq, terrorism and 9/11 ... and is especially good at detailing the ample evidence collected in the months before 9/11 that terrorists were planning an attack on the World Trade Center using civilian aircraft -- more than enough to have prevented it if the system had worked as it should have.

I'm amazed at how many people I talk to don't remember any, or even one, of these stories, which were reported in 2001 and 2002, before fading into the fog.

For example, Beinhart offers a few notable "fog facts" that contradict Bush and Condoleeza Rice's assertions that nobody could have predicted or imagined anything like 9/11:

On March 4, 2001, Fox broadcast a pilot for an "X-Files" spin-off series by Chris Carter, "The Lone Gunmen" (now available on DVD), about a terrorist attempt to fly a passenger jet (by remote control) into the World Trade Center. An article in Wired describes a "jet loaded with passengers heading toward New York’s World Trade Center."

In December 1994, Al Qaeda had hijacked an Air France plane and tried to crash it into the Eiffel Tower. (This was the first thing I thought of when I heard Rice say she didn't think "anyone could have predicted these people would take an airplane and slam it into the World Trade Center." How in the world could you NOT have thought of it, when it was your job and you knew the WTC had already been, and remained, a primary Al Qaeda target?)

In October, 2000, the Pentagon performed a MASCAL training drill based on the idea of a hijacked plane crashing into it. From a Department of Defense news release, Nov. 3, 2000 (since scrubbed): "The fire and smoke from the downed passenger aircraft billows from the Pentagon courtyard.... 'You get to see the people that we'll be dealing with and to think about the scenarios and what you would do," Sgt. Kelly Brown said. "It's a real good scenario and one that could happen easily.'" (Photos here -- scroll down.)

Beinhart also has one of the best explanations for the mass delusional behavior we've witnessed over the last four or five years that I have seen anywhere:

"The tragedy of 9/11 was a result of the failure to see the facts that were in front of us.... If we could have known, utilizing the resources that were already in place, which were normal police and intelligence functions, and all we had to do was pay better attention [to the evidence already collected], then that's all we have to do: pay better attention.

Instead of merely paying better attention [first and foremost, improving computer systems for database sharing among and within security and law enforcement agencies] we have had two wars with a few thousand of our people dead, over 100,000 Iraqis dead, some number of Afghans dead that has never been estimated or mentioned in public, the creation of a vast new homeland security bureaucracy, and serious incursions into our civil rights.

This has cost well over $200 billion. That's on top of all our normal defense and intelligence and criminal justice spending. Yet not a single one of the 9/11 backers, planners, or supporters has been brought to trial, convicted, and sentenced. As of March 13, 2005, "The 120 terrorism cases recorded on Findlaw... have resulted in only two terrorism convictions -- both in a single case, that of Richard Reid, the notorious shoe bomber."

Whew. OK, I admit it: I needed to vent. Here's the main thing I want to get across: Never, never assume that the first stories you read about anything are giving you the full picture of what's going on. Most likely they are spin or misleading fabrications at worst, incomplete and in need of further investigation at best. Always step back, ask yourself what's missing, and see if the story would still be the same if those missing pieces were found. Then keep alert and try to find them.
Advertisement