1) "Let the Right One In": Sole witness to a desanguination: This creature of the night (at right, a standard poodle?) appears out of the darkness of the barren woods, like a corporeal outgrowth of the snow and the white-barked birches themselves. The dog sits, watches, and will not leave, forcing a vampire's procurer to flee in panic and frustration. One of my favorite movie-moments of the year, and one that made me laugh (aghast) the hardest, though nobody else in the nearly full theater joined me. Was it because the movie is Swedish that the crowd didn't seem to know/think it was funny? We won't even talk about the stuff with the cats...

2) "A Christmas Tale": The old house wolf appears, in doorway/reflection, to troubled young son/grandson/nephew/cousin Paull (Emile Berling)... and no one else.

3) "In Bruges": Ray (Colin Farrell) tries with childlike eagerness to catch the attention of Jimmy (Jordan Prentice), a "midget" he thought he had befriended, but makes eye contact with this face instead. 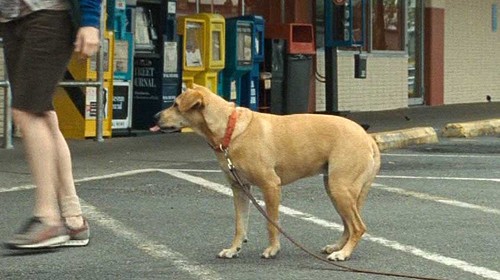 4) "Wendy and Lucy": Lucy (director Kelly Reichart's dog) is a fine character actor, even when her name is in the title. She runs out of the frame in her first shot to retrieve a stick thrown by Wendy (Michelle Williams), and you know right away why their names are paired. She will be felt as keenly whether she is on the screen or absent from it.

5) "Gran Torino": Daisy the yellow lab watches Walt Kowalski (Clint Eastwood) smoke in the tub. "Let a man enjoy himself... will ya, girl?"

SPECIAL MENTION - "The Curious Case of Benjamin Button": An elderly lady and her dog show up at an old folks' home where dogs aren't allowed. But she won't cause any trouble and she won't be around for much longer anyway...