1 Julianne Moore + 1 Mark Ruffalo + 1 movie:Putting them all together 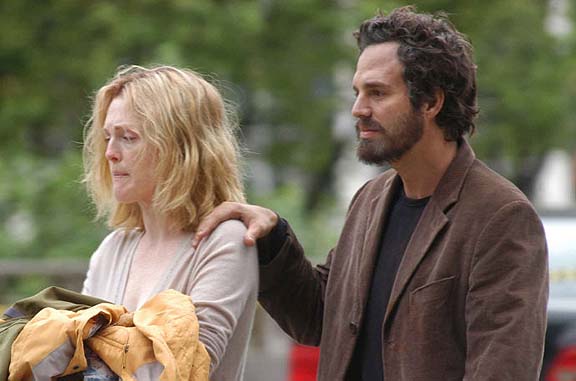 To supplement the discussion below about acting on film ("Bardem, Ledger and the truth about movie acting"), here's a translated excerpt from the blog of Brazilian director Fernando Meirelles ("City of God," "The Constant Gardener") about the editing of his new film "Blindness," starring Julianne Moore, Mark Ruffalo, Gael Garcia Bernal, Danny Glover and Sandra Oh.

This is as concise and valuable a primer on editing and acting as I've seen anywhere.

First Meirelles explains the rough assembly, the loose draft of the film that's usually put together by the editor while the film is still shooting: "This kind of assembly is just putting all the scenes together as they were written in the script. Even if a certain scene did not work out as we planned when we shot it, it will still appear in this rough assembly. (This does not include the scenes that were embarrassing beyond all doubt; some things are better off forgotten.)"

Note that Meirelles is not saying that his actors have flat-out failed, but that certain scenes just don't work and should be tossed right away, if possible. Eventually, after whittling down an assembly of three or four hours (or more) into, say, a 160-minute cut, the challenge may become one of reducing that to around two hours:

And at this stage, when you succeed in diagnosing and locating where are the exact problems in the script or its cinematic interpretation, you can... change the design of certain characters, to make the acting more precise and logical than it was in the actual filming of the movie. (That’s why the best advise I can give an actor who wants to develop his career: suck up to the editor. Bring him chocolate, or flowers – if it is a woman editor. Even expensive wine, if your acting was exceptionally weak this time).

There are a million ways to make a scene better through editing. In a moment of embarrassing acting you can always cut away to the face of another actor, you can always re-record a line which was done badly over again, and to plant it over the stubborn actor’s back. It is very easy to fool the audience (I am sorry to say…) and I admit that I feel some pleasure when I manage to pull it off without leaving traces. But this time, judging by the version we’ve seen, we will not have to use any dirty tricks. The ensemble cast did a very consistent job. The editing challenge here will be to find the right tone to emphasize, to highlight the personality of each character in each stage of the film. To give this one another look, to lengthen the other one’s pause, to shorten a little bit from here, to add some from there.... 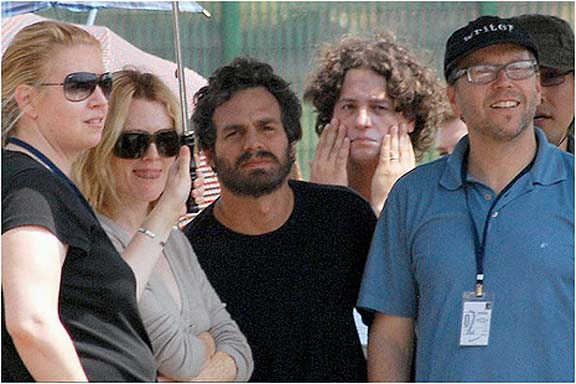 Moore, Ruffalo and Meirelles on the set of "Blindness."

In the third editing round, after cutting out all that was surplus, the changes become almost invisible. You take out pauses between words and sentences said by the actors, you “accelerate” their lines (some actors tend to lengthen their pauses, whether it’s because they forgot their lines or because they fancy grabbing more screen time. Cutting to the other camera throws these pauses out). What else? You shorten a walk down a corridor, a shot of a key turning in a lock turns into merely the sound of a key turning in a lock, an actors’ two strides towards his car are cut, some talk providing an exposition to a certain scene is glued on as off-screen dialog to the end of the previous scene. With the aid of these tricks, the movie gains its tempo, picks up speed....

With no connection to the movie’s pace and the task of cutting out the fat — many important scenes in themselves just don’t get to where they should. It is either because the directing is too transparent (what certain people call: “classical directing”) or because of the acting, or because a certain line which was supposed to be said, was never written in the first place. These scenes demand an emergency surgery.... [T]here is an unlimited number of “regular” editing solutions, which can keep the basic honor of such “sick” scenes and it can still be that at the end one of those scene will never totally recover, and will stay planted in the movie forever as a mark of disgrace. By the way, this always happens.

Except in this movie.... The scene is in the dumps and nothing else works? Cut to a close-up of Julianne Moore’s face and stay there.

"Blindness" is scheduled to be released in the US by Miramax in August, 2008.

Meirelles' "Blindness" blog in the original Portuguese is here.

English translations (by Nathaniel R) of other entries are here.