The Fall of the Revengers 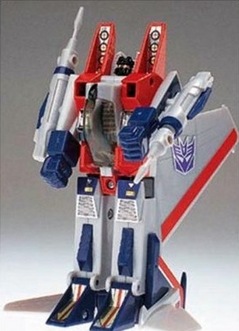 The day will come when "Transformers: Revenge of the Fallen" will be studied in film classes and shown at cult film festivals. It will be seen, in retrospect, as marking the end of an era. Of course there will be many more CGI-based action epics, but never again one this bloated, excessive, incomprehensible, long (149 minutes) or expensive (more than $200 million). Like the dinosaurs, the species has grown too big to survive, and will be wiped out in a cataclysmic event, replaced by more compact, durable forms.

Oh, I expect the movie will make a lot of money. It took in $16 million just in its Wednesday midnight opening. Todd Gilchrist, a most reasonable critic at Cinematical, wrote that it feels "destined to be the biggest movie of all time." I don't believe "Titanic" and "The Dark Knight" have much to fear, however, because (1) it has little to no appeal for non-fanboy or female audiences, and (2) many of those who do see it will find they simply cannot endure it. God help anyone viewing it from the front row of a traditional IMAX theater--even from the back row. It may benefit from being seen via DVD, with your "picture" setting dialed down from Vivid to Standard.

The term Assault on the Senses has become a cliché. It would be more accurate to describe the film simply as "painful." The volume is cranked way up, probably on studio instructions, and the sound track consists largely of steel crashing discordantly against steel. Occasionally a Bot voice will roar thunderingly out of the left-side speakers, (1) reminding us of Surround Sound, or (2) reminding the theater to have the guy take another look at those right-side speakers. Beneath that is boilerplate hard-pounding action music, alternating with deep bass voices intoning what sounds like Gregorian chant without the Latin, or maybe even without the words: Just apprehensive sounds, translating as Oh, no! No! These Decepticons® are going to steal the energy of the sun and destroy the Earth! The hard-pounding action music, on the other hand, is what Hollywood calls Mickey Mouse Music, so named because, like the music in a Mickey Mouse cartoon, it faithfully mirrors the movements on screen. In this case, it is impatient and urgent. I recommend listening to it on your iPod the next time you have difficulty at the doctor's office filling the little plastic cup. 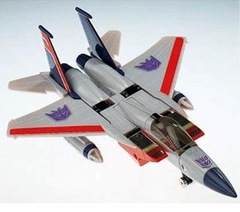 The action scenes can perhaps best be understood as abstract art. The Autobots® and Decepticons®, which are assembled out of auto parts, make no functional or aesthetic sense. They have evolved into forms too complex to be comprehended. When two or more of the Bots are in battle, it is nearly impossible to distinguish one from the other. You can't comprehend most of what they're doing, except for an occasional fist flying, a built-in missile firing, or the always dependable belching of flames. Occasionally one gets a hole blown through it large enough to drive a truck through, pardon the expression.

You want to talk about incredible? I think it's incredible that any of the tiny flesh-and-blood human beings are still alive at the end of the story. As is conventional in action epics about gigantic monsters, the creatures seem to exist on a sliding scale--always possible in theory, I suppose, for a Bot, but disorienting for the audience. On the one hand, you have Bots large enough to rip the top off the Great Pyramid with its bare hands, and on the other, small enough to fit in the same frame with a human, and this movie is widescreen (2:35: 1). To be sure, a Bot can lean down to talk to a human, as Starscream® is doing in the pic with Shia. But when they're seen standing up there's a problem. Their heads are small to begin with, and the effect of perspective from the human eye-level makes many of them unfortunately look like pin-heads.

I didn't have a stop watch, but it seemed to me the elephantine action scenes were pretty much spaced out evenly through the movie. There was no starting out slow and building up to a big climax. The movie is pretty much all climax. The Autobots® and Decepticons® must not have read the warning label on their Viagra. At last we see what a four-hour erection looks like. 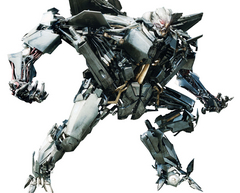 The action is intercut with human scenes that seem dragged in kicking and screaming from another movie. There are broad sitcom situations and dialog as Shia Lebouef goes off to Princeon, and comic relief from his madcap mother (Julie White), who actually plays the most entertaining character in the movie. Then some romances that cement emotional bonds with the speed of Quick Glue, and are well within the PG-13 guidelines. Kevin Dunn and Miss White, as Mr. and Witwicky, are the only characters allowed the slightest dimension, confirming my suspicion that the most interesting conversation at a high school dance is likely to be had with the chaperones.

As is frequent in CGI action, the younger women are made to behave like he-men with boobs. College girls are able to turn instantly into combat-ready participants, except when they have to be dragged to safety by boys. They can out-run explosions with the best of them. Their hair, after countless explosions and long days in the desert heat, is always perfect enough for a shampoo commercial. I suspect many young lads prefer their women like this--at arm's length, if you see what I mean.

Much of the dialog falls under category of Look out! It's necessary in the editing of a film like this to punctuate the action with reaction shots. You're not really able to cut away to another Bot, because their heads are so tiny and so high up there, who knows what they're thinking? You need humans, who react to a blue screen or to a point in space and shout warnings and commands. Acting in a film like this is a season in hell, plus paycheck.

At almost two and a half hours, the film is unreasonably long. Since it's impossible to imagine a studio applauding the extra length and thus greater expense, the running time can possibly be attributed to the ego of Michael Bay, the director: If it is indeed destined to be the biggest movie of all time, who cares how long it is? I suspect it will be trimmed down to under two hours in some overseas markets, and if it is, the human scenes will be the easiest to cut. Then the luckless foreigners will be left with an unremitting Assault on the Senses.

Michael Bay is obviously under the impression that whatever he was doing deserved a 149-minute canvas to do it on. He likes doing this stuff. One pities the hapless animators, peering at their monitors far into the night, trying to distinguish one Bot's hub cap from another's. What we may see at work here is the paradox of rising expectations and diminishing returns . If the first "Transformers" (2007) ran 144 minutes and grossed over $300 million in North American alone, why not keep expanding?

Same goes for the Bots. In the stills with this blog, I have traced the history of Starscream® from its origin as a children's toy through its evolution in TV animation (1984) and the 2007 movie. It has grown steadily more complex, apparently feeding on larger and larger junk yards. Starscream® is now too much to comprehend, especially in Bay's typical average shot length of not much over one second. It pains me to say this, because the designer of several of the Bots was Josh Nizzi, a fellow Illinois grad from my home town. No doubt he has many other arrows in his quiver.

As for Michael Bay, he is only 44 and I hope he tires of this nonsense and returns to making real movies. He was only 31 when he made "Bad Boys" in 1995, and 32 when he made "The Rock." He had been in TV for years. He was a prodigy, like Steven Spielberg, But Spielberg was 47 when he directed "Schindler's List." Michael Bay seems to be evolving in the wrong direction. 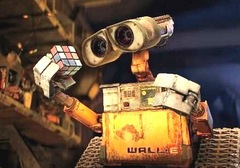 So is the hyperactive blockbuster CGI action genre. If there is one thing everyone in Hollywood thinks they know for sure, it's that the three most important words in movie development are story, story, story. This is not a story: A group of inconsequential human characters watch animation.

The very best films in this genre, like Christopher Nolan's "The Dark Knight" and Sam Raimi's "Spider-Man 2," had compelling characters, depended on strong human performances, told great stories, and skillfully integrated the live-action and the CGI. I've been making a list of my favorite robots, those few that evoked wonder and sympathy and were simple attacks of sound and images. I think of the gentle, loveable "Iron Giant" (1999), by Brad Bird. And the genius of Jon Favreau's "Iron Man" (2008), with its final battle we really got involved in. And I think of another robot whose body was made of junk yard parts. Its name was "Wall-E." That was the 2008 film by Andrew Stanton that some people believe was robbed of a Best Picture nomination by the creation of the animation category.

"Transformers: Revenge of the Fallen" will no doubt gross many millions. There will no doubt be a sequel. But when audiences feel hammered down by a film, they are less likely to fall for another marketing campaign. If Hollywood wants the "Transformers" franchise to endure, maybe they should hire one of those directors. They still know how to make a movie.

Of course humans can run faster than an explosion! In this movie they do it all the time: 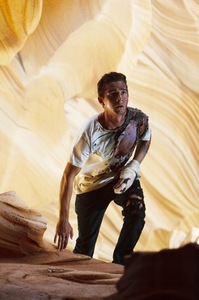