If you don't immediately get that the title "Zero Charisma" is a Dungeons and Dragons joke, this comedy might not be for you. Katie Graham and Andrew Matthews' portrayal of grown-up roleplaying gamers has a documentary precision. It feels like a gamer's version of "High Fidelity," or maybe a dude's answer to "Ghost World." The subculture seems so airless that when hero Scott (Sam Eidson), a thirty-something game master, leads his group through a dice-controlled fantasy world of his own devising, you can practically smell the beer, Cheetos and sweat. Whether you consider this description an enticement or a warning will depend on if you've ever been a part of this scene.

Ultimately, though, the details are window dressing. This is an emotionally inert man-boy film, of the sort that Judd Apatow and his circle produce four or five times a year, only sadder, sweeter and smaller, and cast with character actors you haven't heard of before. The hero is not a particularly likable guy; in fact he's rather infuriating, and the filmmakers and their lead actor refuse to sugarcoat him. Scott is a know-it-all metal-head who lives with his grandma in a house that he keeps insisting is "his." He's got anger management issues (in one scene he rage-punches a hole though his flimsy bedroom wall) and is a classic underminer to boot. When an artist buddy reveals that he's in talks with a comic book publisher, Scott's first impulse isn't to congratulate him and wish him luck, but to warn him to cover himself legally, so that he doesn't get screwed like Scott did when he supposedly wrote "The Matrix."

For the most part, "Zero Charisma" is content to observe rather than engage. It's unsatisfying not because the characters are uninteresting (they're quite well-drawn) but because they don't illuminate any larger principles, and because it's often hard to tell if the filmmakers are belittling them as goofy, limited people or truly feeling their pain. At times the movie plays like a look back at a way of life by artists who were a part of it once and enjoyed it at the time but find it rather embarrassing in retrospect. The push-pull between cruelty and kindness worked in "Ghost World," "American Splendor," "Welcome to the Dollhouse" and other films about social misfits, but for all their intelligence, these filmmakers don't have the dexterity (see what I did there?) to fuse such different modes.

Nevertheless, there's much to like here. Random events break up the melancholy. Scott's grandmother has a health crisis. Scott's mother swoops in looking to sell the house. His crew's loyalty is tested when they meet a gamer named Miles (Garrett Graham) who knows more than Scott, is accepted by non-geeks, has a nice and conventionally pretty girlfriend, and publishes a popular blog. Told by a friend that "nobody" reads his blog, Scott huffs, "Fourteen visitors a week isn't nobody." "Zero Charisma" is a movie about emotionally inert people who labor mightily to change their lives in small ways, and whose efforts at self-improvement are thwarted by emotional feedback loops that cause them to make the same mistakes over and over. If it were possible to roll your way out of real world crises, these guys would do just fine, but there are no saving throws in life. 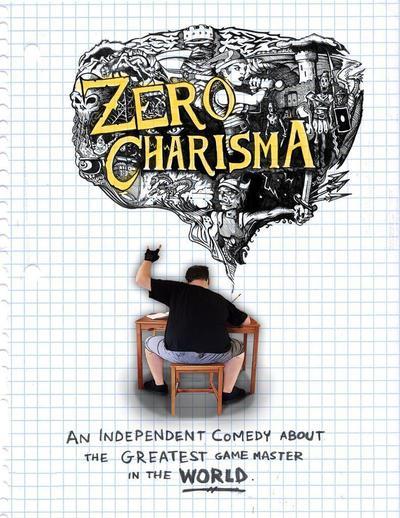