Maine takes Alice’s predicament seriously, but she maintains a light distance, all the better to lampoon the absurdities and hypocrisies of sex-phobic messaging. “Yes, God, Yes” is frank about sex, but it’s funny about sex too. Alice is so innocent that when faced with a rumor about the sexual act she supposedly performed at a party, she has to ask her best friend what the term even means. (Her friend doesn’t know.) She spends half the film trying to find out what the heck she’s even been accused of. Fearful of going to hell, she signs up for a four-day spiritual retreat, hosted by the school. Graduates of the retreat stroll around in a blissed-out state, wearing matching sweatshirts, and Alice wants whatever drug they’re on. Her desires to crush her impure urges fly out the window the second she arrives at the retreat and gets a look at a teenage hunk named Chris (Wolfgang Novogratz). She swoons just from a glimpse at his hairy arm.

I went on a couple of Catholic retreats in high school and some of the scenes in "Yes, God, Yes" made me cringe in recognition: the disarming friendliness, the novelty of seeing your classmates out of a school setting, the weirdness of talking about serious subjects with your peers, the pressure to cry when you’re “sharing” (it’s so bizarre, but it’s definitely a “thing” that happens on these retreats and Maine nails it). Mostly, though, those retreats were a hotbed of teenage romance! “Yes, God, Yes” shares some similarities with films about kids getting “gay conversion therapy” (“But I’m a Cheerleader,” “Boy Erased,” “The Miseducation of Cameron Post”), particularly in the scenes showing repressed uptight adults shame teenagers for having perfectly natural feelings. Maine keeps a light touch throughout. She finds these adults absurd—people who pathologize sex not because the Bible tells them so, but because they themselves have unresolved issues around sexuality.

"Yes, God, Yes" started as a short film, and the feature is Maine’s debut as a director. She also co-wrote 2014’s “Obvious Child,” a very funny character study with some sharp insights about the unruliness of women’s bodies. Maine has a good feel for comedic rhythm—there’s one particular cut that almost made me laugh out loud—and she is really good at finding those quiet moments when big internal shifts take place. A standout scene is Alice’s random encounter with an older lesbian (beautifully played by Susan Blackwell), where Alice realizes for the first time that there’s a big world out there, and being an adult doesn’t mean you have to be an uptight hypocrite. You can be whole, you can be free.

It's baffling that “Yes, God, Yes” was saddled with an R rating. There’s no nudity, no tough language, nothing exploitative or racy. This is a sweet sincere film about a girl getting all twisted up because of the mixed messages passed down to her. There’s nothing here that would shock a teenager. On the contrary: there is much here that would say to a teenage girl: “You probably think you’re all alone in feeling like this. Good news: you’re not.”

Now available in virtual cinemas and select drive-ins; available on digital and VOD on July 28. 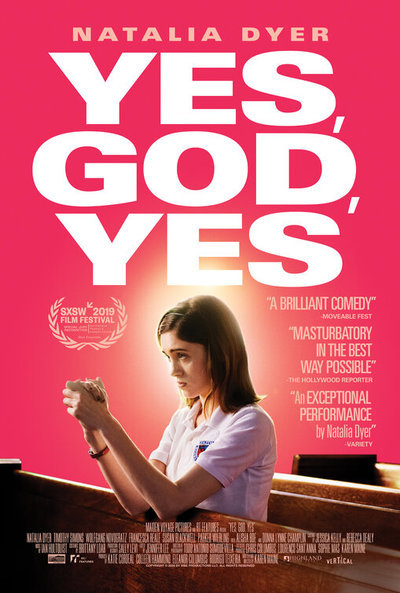