Released only months ago, Desiree Akhavan’s powerful period drama “The Miseducation of Cameron Post” is about a young woman who survives a Christian “ex-gay” conversion therapy camp she is forced to attend, after getting caught making out with a female classmate on prom night. Adapted from Emily Danforth’s YA novel, the title character of Akhavan’s film (played by Chloë Grace Moretz) has a strong conviction of self: we can detect only a faint amount of uncertainty seeping into her conscience while she grows into her sexual identity and wrestles with the traumatizing rituals of the Evangelical camp she bides her time to get out of.

On the heels of Akhavan’s film comes Joel Edgerton’s poignant, similarly themed “Boy Erased,” adapted by Edgerton from Garrard Conley’s memoir with the same name. Quite different in tone, structure and narrative goals, the two films surely don’t need to be compared just because they share a common topic. But the proximity of their release dates almost begs a side-by-side consideration. In that, it’s worth noting that Jared Eamons, the struggling teen at the heart of Edgerton’s film, doesn’t initially exude the same self-assurance Cameron Post does. In fact, Jared’s coming out journey, as charted in “Boy Erased,” aligns more closely with an LGBTQ person’s inner negotiation that Akhavan, who identifies as bisexual, talked about during a post-screening Q&A of her film earlier this year in New York. Akhavan said many people in the LGBTQ community come to a decisive realization in their own time, that the portion of the world that doesn’t accept them is wrong and they themselves are right.

Jared, portrayed with startling nuance and complexity by Lucas Hedges (“Manchester by the Sea”), finds himself in the thick of the aforementioned reconciliation Akhavan articulated. The son of a Baptist pastor being raised in a small, conservative town, the college-aged Jared is told by almost everyone around him that there is something wrong with him; that he won’t be loved by God unless he beats his homosexual urges. A kindly doctor (in a memorable cameo by veteran actor Cherry Jones) happens to be the only grown-up who privately tells Jared that he is a perfectly healthy and normal teenage boy. And yet, Jared gets denied his true identity by almost everyone else. When a soul-crushing sexual assault, the details of which he can’t bear to share with his parents but we learn as part of the film’s steady supply of flashbacks, forces him to come out to his family, his authoritative father Marshall (Russell Crowe) and initially obedient mother Nancy (Nicole Kidman) register him to a conversion program run by the impassioned, self-appointed therapist Victor Sykes (Joel Edgerton). Once under the daily, 9-to-5 control of the villainous Sykes at his Love in Action facility, the young men and women give up their phones and their larger freedoms, not permitted to discuss the details of their “therapy” with their guardians, who dutifully wait at a nearby hotel.

What Cameron Post, a skeptic from the get-go, figures out swiftly with the help of some equally strong-willed allies—that she has to pretend and play along for a while— Jared has a significantly more difficult time with, particularly due to a lack of guiding voices around him. An exception to this is his fellow camp inmate Gary (Troye Sivan, also the co-composer of the film’s gloomy original track “Revelation”), who tells Jared to fake his way through the program until he safely gets out. The alternative is ugly: the undesirable fate of being stuck with Sykes’ program full-time for a whole year is one Jared is determined to avoid. As he works his way through the emotionally manipulative curriculum and builds his family tree to look for the sources of his “sin” (that’s what Sykes calls it), heartbreaking suicides unsurprisingly occur just as they do in “Cameron Post.” To the script’s fault, the secondary members of Love in Action (one played by filmmaker Xavier Dolan), get little time of their own in “Boy Erased.” Still, the later one of the suicides especially leaves the audience heartsick—the episode creeps up after we watch the ill-fated character selflessly lend a helping hand to a vulnerable Jared, when he desperately calls his mother for help in a moment of deep crisis. In this impressively shot, escalating scene, Edgerton captures the panic-inducing entrapment of Jared with startling tension. For a few moments during that sequence, “Boy Erased” almost feels like a thriller.

And yet, the most emotionally arresting moments of “Boy Erased” are delivered through quieter scenes between Jared and his parents. In various over-the-top, true-to-character costumes, the predictably excellent and heavily made-up Nicole Kidman brings forward Nancy’s inner dilemma as a sweet, religious woman, who eventually leans into her motherly love, intuition and common sense with confidence. In an exceptionally measured performance that reminds us the fine actor that he really is (we almost forgot between misfires like “Les Misérables” and “The Mummy”), the scene-stealing Russell Crowe leaves a haunting impression as a conservative but soft-edged father, who is asked to question his bigoted values at last. In navigating the delicate storylines of Jared’s parents, Edgerton mostly does a decent job, conveying that they act out of misguided love and circumstantial concern. While left a bit on the surface and cut brief, the eventually rewarding transformation of Nancy and Marshall is what sets “Boy Erased” apart. However imperfect, Edgerton’s film aims to intimately speak with parents like them and, who knows, perhaps to even change their hearts for the better. 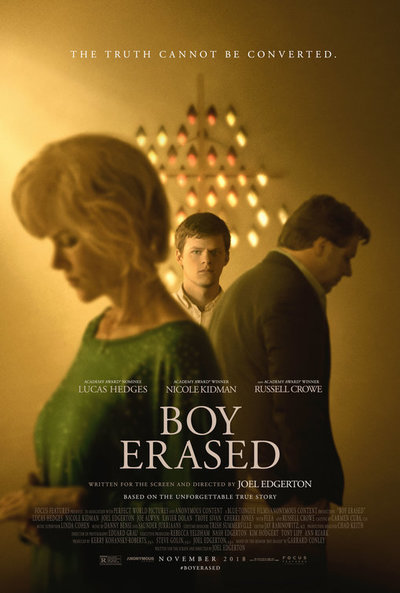 Rated R for sexual content including an assault, some language and brief drug use.

Writer (based on the memoir by)