When “Wonder Woman” came out in 2017, it was a thrilling breath of fresh air, both within the darker realm of DC Comics adaptations and the larger context of bloated summer blockbusters. Director Patty Jenkins’ film offered equal parts muscle and heart, with a perfect tonal balance between transporting action and gentle humor, dazzling spectacle and charming romance. Crucially at its center was the impossibly charismatic Gal Gadot, who was more than just a gorgeous and statuesque stunner. She radiated goodness, light, and hope in a way that was infectious, that made you believe in the power of superheroes beyond facile platitudes about doing what’s right and protecting mankind.

Gadot remains a winning and winsome figure in “Wonder Woman 1984,” and she retains her authentic connection with the audience, but the machinery around her has grown larger and unwieldy. Maybe that was inevitable, the urge in crafting a sequel to make everything wilder and brasher, more sprawling and complicated. In the process, though, the quality that made the original film such a delight has been squashed almost entirely. And yet, the foundation of the script Jenkins co-wrote with Geoff Johns and Dave Callaham, based on William Moulton Marston’s original characters, is a pretty simple one: It’s an indictment of greed, of our entitled desire to have what we want and have it now. The story takes place at the height of Reagan-era conspicuous consumption, hence the title, but the point “WW84” is making about the destructive nature of avarice is certainly relevant today.

Too often, though, the instinct in evoking that period is to wallow in obvious nostalgia—popped collars on pastel Polo shirts, a Centipede game at the arcade, a B. Dalton Bookseller at the brightly-lit, triple-decker mall. There’s even the obligatory trying-on-clothes montage to allow Chris Pine’s resurrected World War I pilot to marvel at the ridiculousness of parachute pants. (Also: breakdancing! What is that all about?) We’ll get to Steve in minute, and to the potentially intriguing idea his return represents.

But what’s also disappointing about the “WW84” screenplay is that it feels like it belongs to a movie that actually came out in the ‘80s. Its plot-driving device would be right at home in a high-concept comedy: an ancient stone that immediately grants you whatever you wish for, resulting in both wacky hijinks and massive catastrophes. It’s a banal notion along the lines of “Weird Science” and “Zapped!,” a cautionary tale in which fantasy fulfillment ultimately doesn’t deliver the satisfaction its characters expect.

Far more compelling is the film’s opening sequence, a flashback to a pivotal moment in the life of young Diana, years before she’d become Wonder Woman. As a girl on the magical island of Themiscyra (played once again by the poised and perfectly cast Lilly Aspell), she competes in an arduous challenge of strength and skill against women twice her age and height. This whole section soars—the camerawork and editing put us right in the middle of the action, and Hans Zimmer’s score sweeps us along. The memory also efficiently establishes Diana’s fearlessness and ability as well as the important lesson she learns about the nature of truth that will become relevant down the road. It is the film’s high point; nothing else will match it in terms of visual cohesion or emotional impact.

Flash forward to 1984. Diana Prince is now living in Washington D.C. (at The Watergate, amusingly) and working as an archaeologist at the Smithsonian, using her expertise and language skills to study ancient artifacts. Being ageless makes her a glamorous and elegant but lonely figure. (Costume designer Lindy Hemming plays off Gadot’s height and her character’s heritage by placing her in regal, drapey outfits that emphasize her length.) We see Diana sitting alone at a table at an outdoor cafe, smiling at passers-by, yearning to make a connection. It’s the film’s most quietly moving moment.

So when mousey new co-worker Dr. Barbara Minerva arrives and meekly asks if she’d like to have lunch, Diana doesn’t quite know how to respond because she doesn’t really have friends. But the two soon hit it off, because Barbara is also a misfit in her own way. Kristen Wiig is subtly hilarious in these early scenes as the sweetly goofy, warmhearted researcher. The chemistry she and Gadot share when they meet for drinks at happy hour, the Washington Monument gleaming behind them in the distance, made me wish they were starring in a mismatched buddy comedy instead. The role allows Wiig to deliver her lines with the sly, self-deprecating deadpan that’s her trademark; it seems effortless but actually requires pinpoint precision. But watching her stretch and develop into a villainous figure as the film progresses has its own joys. It’s a huge change of pace for the comedian, and she rises to the occasion both physically and emotionally.

You see, Barbara gets her hands on a mysterious stone that comes into the lab, which she and Diana determine is the kind that grants one wish to the bearer. Diana wishes she could once again be with her love, Pine’s Steve Trevor, now deceased for seven decades. Barbara wishes she could be more like Diana: confident, strong, sexy. But then—get this—a whole ‘nother person enters the lab under the guise of being a benefactor, when he actually wants the stone for his own nefarious purposes. He’s Pedro Pascal as fluffy-haired TV con man Maxwell Lord, a fake oil tycoon promising prosperity to the masses. Crafting a wealthy façade and living beyond his means, Maxwell Lord is an archetype of the era. But beyond his shameless hunger for power and respect, there isn’t much to this character, and Pascal’s portrayal grows increasingly cartoonish. A sensitive performer, he’s afforded the opportunity to show more range beneath his Beskar steel helmet and armor on “The Mandalorian.”

The bulk of the overlong “WW84” running time is devoted to the chaos that ensues when wish fulfillment runs amok. The script meanders awkwardly between all three of these characters as they either explore their newfound powers or the consequences of their choices. Along the way, the rules for wishing on the stone keep changing in whatever way is convenient to keep the plot chugging along. But some genuinely thrilling moments emerge along to the way to the generically shiny, noisy climax, including a heart-pounding chase across the Egyptian desert that allows Diana to reveal both her resourcefulness and her kindness. And Barbara’s transformation from unassuming scientist to ass-kicking seductress is a pleasure to behold, mainly because the evolution of her clothes and hair are so great and she seems to be having the most fun of anyone on screen. (The same cannot be said for Gadot and Pine this time, whose connection is weirdly inert despite the potential poignancy of being reunited with your one true love.) Sure, Barbara eventually turns into the comic book villainess Cheetah and resembles a refugee from “Cats,” but until then, her arc is the most interesting element of the film.

At the end of this Dumpster fire of a year, though, “Wonder Woman 1984” does deliver a welcome escape, as well as a much-needed message of hope. We’ll take such diversions where we can get them these days, either spread out at a theater or from the safety of your couch at home. It’s fine. Sometimes, it even soars. But it could have been wondrous.

Available on HBO Max and in theaters on December 25. 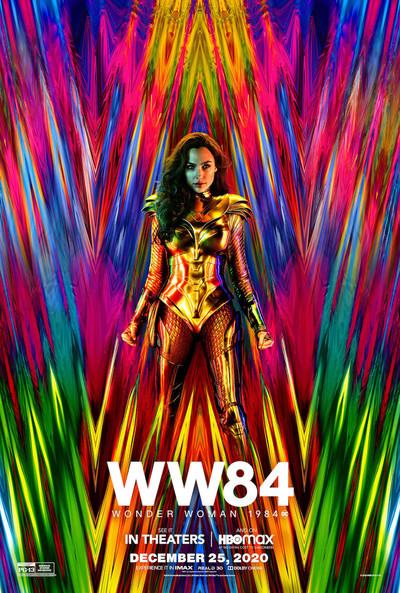 Rated PG-13 for sequences of action and violence.

Writer (based on characters from DC Wonder Woman created by)