Given that it was very well received by an alarming number of colleagues when it played at the New York Film Festival in September, I’ve been trying to figure out a way that “Wonder Wheel” can be seen as good. Turgid even in its brightness, overwritten in a way that does nothing to camoflauge its first-draft quality, jaw-droppingly overacted by all but one of its central cast members; it’s a Woody Allen disaster that elicits both a cocked head and a dropped jaw. Given that Mr. Allen’s professional approach to moviemaking most resembles a basketball player’s free-throw practice—he endeavors to make a picture once a year, no exceptions, and has been hitting that goal for decades—variability of quality is a given. But, man, this one.

“Wonder Wheel” opens with narration from Mickey, a Coney Island lifeguard played by Justin Timberlake. His tale, he tells us, takes place in Coney Island in “the 1950s.” The disinclination to give a particular year is indicative of an overall slackness, we soon see. Although given that the movie’s ostensible theme song is the Jo Stafford recording of “You Belong To Me,” popular music mavens can infer it takes place during or after the summer of 1952.

Mickey tells the viewer he was, aside from being a Coney Island lifeguard, a student at New York University (hmm) and an aspiring playwright. Mr. Timberlake applies his standard admirable enthusiasm to his work here, but it also appears that everything he learned about “period” acting he picked up from watching Tim Matheson in “1941.” In any event, the story he tells at first is not his yet. Warning the viewer that he himself has a penchant for melodrama, he speaks of a family whose living quarters are smack dab in the middle of Coney Island’s fried-food and amusement-park-rides bustle. This is a variant on Alvy Singer’s joke about living right under the Cyclone, Coney Island’s famed roller coaster, in “Annie Hall,” but here it’s played for trauma.

Matriarch Ginny (Kate Winslet), wife to oafish Humpty (Jim Belushi) and mother (from a prior marriage) to a sullen ten-year-old pyromaniac, has enough stress and disappointment in her life without the constant, headache-inducing noise. The trio’s drama—Humpty has trouble keeping off the sauce; Ginny is haunted by a past that promised romance and glory and, when she was still aspiring to be an actress, fame; Junior just can’t find enough things to set on fire—is framed within impossibly gorgeous Coney Island sunsets pouring into their domicile.

Then Mickey comes into Ginny’s life, and rekindles her passion with the kind of thing a lifeguard who is played by Justin Timberlake traditionally offers. But not before her home is rocked by the arrival of Carolina (Juno Temple), Humpty’s adult daughter from his own prior marriage, whom blustery Humpty dotes on, after forgiving her for her transgression—marrying a Manhattan mobster from whom she is now on the run. Because then, as now, when you want to hide out from a criminal in Manhattan, what you do is go to Coney Island. Yes, I know, and the script contains more than one convolution of logic to explain why Carolina’s move “makes sense.”

Mickey’s attentions, and his refinement, make it all go away. Except Mickey soon meets Carolina. She is vulnerable, and is receptive to pieces of literature he offers her, and all that. Even viewers with zero familiarity with the director’s own domestic situation and how it came to be are likely to find this plot twist of a love triangle involving a stepchild strangely off-putting. In any event, a lot of things do not end well.

At one point, during a confrontation, Ginny exclaims, “Yes! I am consumed with jealousy!” and this is the pitch at which almost all the dialogue sits. Now, given that the frame story is Mickey’s, and that he himself admits a weakness for dramatic exaggeration, one could attribute the constantly broiling floridness of “Wonder Wheel,” from the “Plan Nine” style of its dialogue to the hothouse color palette of Vittorio Storaro’s cinematography, to some sort of Brechtian distancing strategy behind which the real story or statement lies. But I don’t think that’s it. Allen is only effectively Brechtian when he’s nailed down a certain style in which to wield his brush; he did a much better job of it in “Shadows and Fog,” a film widely regarded as a failure, than he does here.

No, I think that “Wonder Wheel” is a mess in which the pastiches of Tennessee Williams and CinemaScope melodramas of “the 1950s” are meant to ignite like fireworks but instead just pop like stink bombs. Of the primary cast members, only Temple, playing Carolina as if she’s no big deal, escapes without embarrassment.

Mr. Allen’s next free-throw, a film starring Jude Law, Selena Gomez, and Elle Fanning, should come our way in late 2018. Given the way his name has been repeatedly brought up in the context of revelations of sexual misconduct in Hollywood, whether he’ll be afforded a place on the court any time soon is for the first time in some time substantially in doubt. 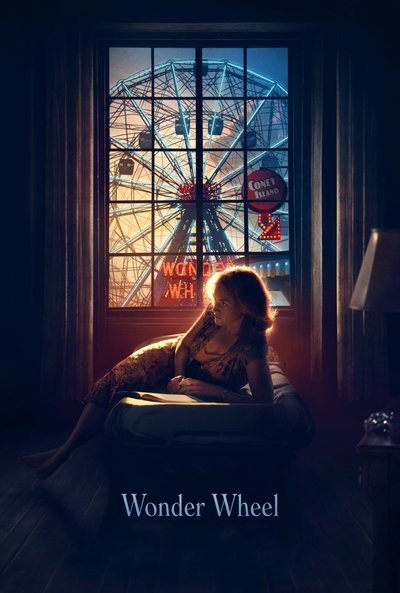 Rated PG-13 for thematic content including some sexuality, language and smoking.