Jason Statham movies aren’t known for their dialogue. People attend his films for their action sequences, which is why so few filmmakers give Statham much to say. That’s a shame, because when given the rare chance to be chatty, Statham becomes more than just a lethal weapon. “Wild Card” gives him more opportunities to converse than to clobber, and as odd as this may sound, I really enjoyed listening to Statham talk. His fight scenes have their predictable, violent payoffs, but his rambling monologues are unexpectedly, gloriously entertaining. This film’s tagline should be “Come for the stabbing, stay for the gabbing!”

With “Wild Card,” screenwriter William Goldman takes a third crack at the story of Nick the “Vegas chaperone.” Goldman wrote the source novel and a 1986 film adaptation starring Burt Reynolds, both of which were called “Heat.” Had the 1986 version starred Bruce Willis instead of Reynolds, “Wild Card” would be redundant: Statham’s take on Nick evokes Willis in his prime. He’s as quick to cut a villain down with a quip as he is with a sharp object, and a gloomy raincloud of vulnerability seems to perpetually hang over his head.

Details of Nick’s former life are left vague, though one can assume he has an intimate knowledge of all things violent. His current incarnation is a friendly British chap who does favors for people. Everyone we encounter mentions these favors, and how indebted they are to Nick. His latest assignment requires him to get beaten to a pulp by a pudgy, balding guy trying to impress Sofia Vergara. The ruse works, and Nick gets $500 for his troubles. The money helps finance his eventual escape from Las Vegas. Nick’s desired getaway locale, Corsica, appears in brief flashbacks that look like Ralph Lauren ads.

Nick’s next assignment involves the battered woman dumped out of a car in “Wild Card”’s first scene. She’s Holly (Dominik Garcia-Lorido), an escort who once loved Nick. When he hit rock bottom, she nursed him back to health. Now she wants Nick to help her find the man who brutally raped her before his henchmen left her for dead at the hospital. Since Nick knows everyone in the underbelly of Vegas, including a kingpin named Baby (Stanley Tucci), he easily finds the guilty party. Sadistic Mafioso Danny DeMarco (Milo Ventimiglia) and his henchmen cross paths with Nick at DeMarco’s hotel suite, ushering in the first instance of Statham doing what you paid to see him do.

Rather than kill Danny, Nick merely roughs him up, paving the way for Holly to exact a humiliating, though non-lethal vengeance on Danny’s most prized possession. For his troubles, Nick is paid $50,000 in hush money from Danny’s stash. As Holly rides off into an avenged sunset, Nick heads for the nearest blackjack table to attempt the final big score that will hasten his exit from Sin City. The movie is about 40 minutes old.

It’s here that we realize that “Wild Card” is two parts “The Gambler” and three parts “The Equalizer.” It’s better at the former than it is the latter. Statham reeks of a compulsive desperation Mark Wahlberg can’t touch, and director Simon West films the big high stakes gambling sequence with a white-knuckled excitement sorely missing from Wahlberg’s remake. It helps that the wonderful Hope Davis plays Nick’s friend and dealer, Cassandra. Davis does more with a sympathetic glance than pages of exposition could describe.

There’s another assignment for Nick, and Goldman uses it as a rather sloppy way of tying all his plot threads together. A rich, 23-year old software developer named Cyrus Kinnick (Michael Angarano, channeling a young Matthew Broderick) wants to pay Nick to teach him how to be brave. Show tunes and the return of a very angry, slightly mutilated Danny DeMarco figure in Cyrus’ lessons. There’s also a fight scene set to the Drifters’ version of White Christmas, a mobster summit that hinges on seeing a character’s penis and Statham finding a use for teaspoons and butter knives that Emily Post wouldn’t endorse but Quentin Tarantino would.

Throughout, Statham expertly handles Goldman’s sometimes absurd dialogue. The film is at its best when Nick chats with people. “Wild Card” wisely casts its supporting characters with actors who leave an impression, including Davis’ dealer, Anne Heche’s diner waitress, Davenia McFadden’s information-gathering maid, Jason Alexander’s office mate and Tucci’s head honcho, Baby. The folks in Nick’s orbit form a self-contained society with its own set of rules and regulations. “Wild Card” has a finely tuned sense of the Vegas working-class, of people who are off the beaten path, hustling in the harsh light of day that most tourists sleep through.

It’s kind of a shame that the film feels compelled to interrupt this feeling with violence. There’s less than you might be expecting, and I’d be remiss if I didn’t say those scenes are fun in the most gratuitously brutal ways (one guy gets gruesomely slashed with a credit card). But you’ve seen Statham do all that before, and it clashes with the novel-like vibe Goldman successfully creates. Perhaps that’s why movies give Statham little to say: His gift of gab overshadows his penchant for mayhem. 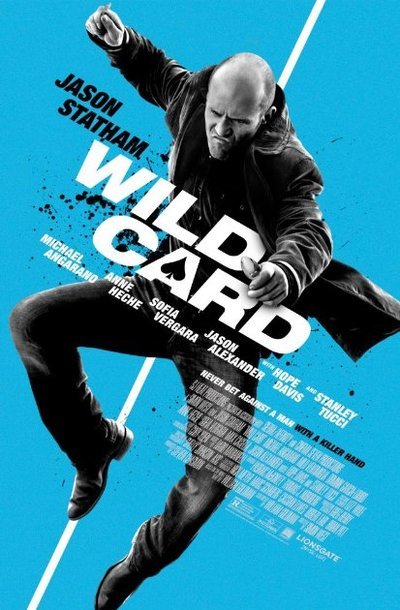