The title of the movie is “Why Him?,” your first indication that this raunchy R-rated comedy is far more interested in the men engaged in battle across generational, emotional and socioeconomic lines than it is about the woman at the center of the fight.

That woman, by the way, is a bright and bubbly Stanford University senior played by Zoey Deutch—a character of ambition and theoretical agency. But the likable actress (see: “Everybody Wants Some!!”) is relegated to functioning as more of an idea and a pawn than anything else. “Why Him?” spends more time and energy (SO much energy) on the age-old struggle between an overprotective father and the eager-to-please young man who hopes to become his son-in-law.

Bryan Cranston and James Franco are stuck in these one-note roles, respectively, in what is a one-joke movie. Director and co-writer John Hamburg, creator of the “Fockers” franchise, borrows liberally from himself here, making slight tweaks to the central dynamic of those films while upping the gross-out factor. Cranston is uptight and overprotective; Franco is unfiltered and overpowering. “Why Him?” hammers that central notion, hard, for nearly two hours.

But we’re supposed to find both of these characters adorable (or at least admirable) because of one line from Deutch’s character, Stephanie, which suggests perhaps they’re not as different as they seem because they’re both truly authentic, for better and for worse. They’re at least consistent, that’s for sure.

Cranston’s Ned Fleming is the longtime owner of a Michigan printing business, which has been suffering lately in this age of digital greetings. (“Why Him?” plays his Midwestern folksiness for easy, condescending laughs from the very start with a celebratory scene at Applebee’s.) But he agrees to travel to California for Christmas, along with his chipper wife, Barb (Megan Mullally), and their teenage son, Scotty (Griffin Gluck), to meet their daughter’s new boyfriend.

That would be Franco’s Laird Mayhew, who Stephanie’s parents don’t realize is a) 10 years older than she is, and b) a tech billionaire. Laird lives in a ridiculous, minimalist monstrosity high in the hills above Silicon Valley, where various employees, hangers-on, celebrity chefs and farm animals wander in and out during the day. “Why Him?” has nothing to say about the grotesquerie of such a nouveau riche display; these are just random ideas that flit by. Although Kaley Cuoco as the voice of Justine, Laird’s intrusive, in-house version of Siri, doesn’t seem like a possibility that’s too far away.

Keegan-Michael Key gets the film’s few laughs as Gustav, Laird’s right-hand man, concierge and personal trainer. A running bit in which Gustav attacks Laird out of nowhere to keep him sharp and hone his parkour skills might have been amusing if the script from Hamburg and Ian Helfer didn’t feel the need to spell out its similarity to the relationship between Inspector Clouseau and Cato. Jokes are just so much funnier when you explain them afterward, right?

But reining Laird in is impossible—he’s all impulse with his puppyish enthusiasm and profane chatter. He wants desperately to gain Ned’s approval (because Barb’s clearly doesn’t matter) but risks alienating him instead. Oddball characters are Franco’s bread and butter—he’s repeatedly shown he’s game for whatever weirdness is required of him—but he’s afforded no nuance here. He’s just extreme and exhausting. Cranston, meanwhile, is hemmed in on the opposite end of the spectrum. Ned is judgmental and inflexible, with repeated references to how much he and Barb love the band KISS serving as the only indication that he was ever any fun.

Anyway, after an increasing cavalcade of flatly crass visual gags featuring high-tech toilets, moose urine and poorly-timed sexual shenanigans, “Why Him?” collapses the way so many R-rated comedies do. It goes soft and nice and wants us to care about these characters who barely resemble human beings. After all, it’s Christmas. But everyone involved here should have asked Santa for a stronger script. 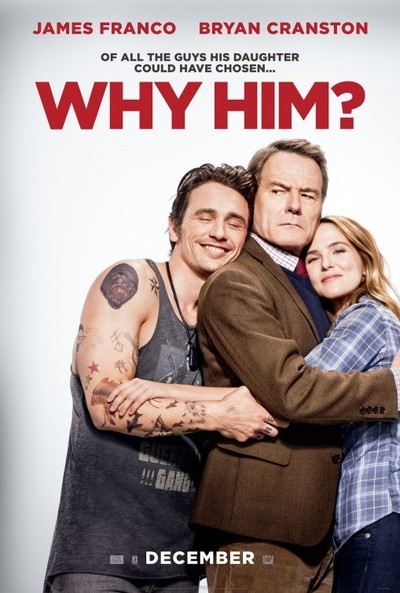 Rated R for strong language and sexual material throughout.