When the Bough Breaks

For three years now, Sony production company Screen Gems has catered a horror movie tradition that occurs on the second weekend of September, involving films that do not rely on the supernatural or even sequels. Films “No Good Deed” and “The Perfect Guy” may appear insignificant with their TV-ready composition and lack of critics screenings, but the way they top the box office each opening weekend says otherwise. Other trends are curious too: They are led by predominantly black casts, often with leads who have an awareness-claiming executive producer credit, and dance with the boundaries of passion and violent obsession. Unfailingly, they are polished productions of horrendous scripts that aim to seduce audiences with sexy, abusive stalkers.

The latest addition to this informal franchise is “When the Bough Breaks,” which boasts no good escapism and a very imperfect sense of humanity. It is directed in large part by stimulating pieces: establishing shots of powerful skyscrapers or the interiors of a fancy home; close-ups of select PG-13 flesh. When it yearns for horror thrills, the "behind you!" beats are by-the-book. This would be fine if the story wasn’t so hideous, this time replacing the violent masculinity of characters played previously by Idris Elba (“No Good Deed”) and Michael Ealy (“The Perfect Guy”) with the tale of a villainous pregnant woman seeking to destroy a marriage and their last hope at having a baby, all to see if we have more taste than the film itself.

Steered by a wall-to-wall score that tells you the exact tone of a scene, “When the Bough Breaks” starts innocently enough, with a beautiful couple, John and Laura Taylor (Morris Chestnut and Regina Hall, respectively) who are trying to find the right surrogate mother. They’ve gone through three miscarriages and are on their last embryo. During the opening credits, they learn about Anna (Jaz Sinclair), a smiling young woman who loves the idea of having something that someone else wants. She has a shady fiancé, Mike (Theo Rossi), who helps her create the image of a nice young couple, so much that when Mike is arrested for beating Anna, she is invited to stay at the Taylors’ beautiful New Orleans house, where an obsession suddenly flares within Anna. Anna is carrying their baby, but she wants to have John, too.

Despite the story’s initially completely baffling but welcome focus on characters for a change, the movie is baffled by the requirement of motivation, instead wanting to honor ideas of obsession while finding a way to get some dead body insert shots into the mix. A fun gap in all of this is the stated notion that the baby does not belong to the Taylors—ever, if Anna wishes—and it makes a pitch of Anna's mania essentially into that of a couple trying to snuff out the surrogate mother after failing to own her and then her baby. For these Screen Gems films that talk about personal boundaries, which are violated by evil, initially innocent people who take advantage of good will, now we’re meant to root for characters to take away a baby from a woman who is revealed to be a multi-foster home kid and survivor of sexual abuse. If she should get away from the couple with the baby without John somehow by her side, she's only entering a bleaker future with another life to take care of. What fun. The character trait of surrogate mother proves to be a terrible idea to create obsession with a person of close proximity; 2009’s “Obsessed”—a Screen Gems movie too, starring Beyonce, Idris Elba and an Ali Larter trying to get between them—does this much better by simply not overthinking its title.

Casting plays a key part in these films. It’s not just in finding beautiful leads who make the experience go quicker but helping us believe a smidgen of the hokum. In the case of “When the Bough Breaks,” Morris Chestnut and Regina Hall are excellent salespeople, imbuing sincerity into the characters and their progressively dumb actions, even going so far in the first act as to convince us that this drama will not eventually explode into a big ball of fire shortly after take-off. Hall, in particular, has a genuinely touching moment when she expresses the emotional pain of her miscarriages. “You start to hate your own body,” she says, creating a sinking feeling in my stomach this script doesn’t deserve.

The wild card in the story is Jaz Sinclair, given an "and introducing" credit in the beginning. Her image of evil is made up of different attitudes, but it doesn’t amount to a full character. She doesn’t provide the believable shift from possibly innocent to possibly manipulated (by Mike) to then desperately obsessive. Her performance is oddly alien—literally, in that she tilts her head and observes John with the calculation of a Scarlett Johansson’s extraterrestrial in “Under the Skin,” the two of them robots seemingly trying to learn what is seductive. This is believably an editing fault in part—maybe there’s a scene in which she bridges the different attitudes—but her character is not so much conflicted as cluttered.

Even with the cheapest of purposes, these Screen Gems projects aren’t just slick with their aesthetic, they’re morally tasteless, which makes indulging in their campy tales all the more difficult. Previous installations featured abusive, obsessive men of intimidating physical presence, meant to be forbidden cocktails of sex and death—for the viewers, not for the characters who are decisions away from sexual assault or worse. Now the villain has changed genders and is treated like a bomb of which you don't know which wire to cut. Especially as it is stated out loud early on by John and Laura that perhaps Anna is just hormonal (they talk about her like she is a cat in heat), there’s a bizarre connection to her aggressiveness involving those hormones, that of being violent and so, err, procreant. By the force of sheer tastelessness, the movie succeeds in 1.) pregnant woman hormone-shaming and 2.) continuing the film series’ aggressive lack of nuance, for the sake of letting psychos stimulate us and then get what is coming to them. While empathy is first to go in "When the Bough Breaks" and its Screen Gems predecessors, there is nothing good in its place. 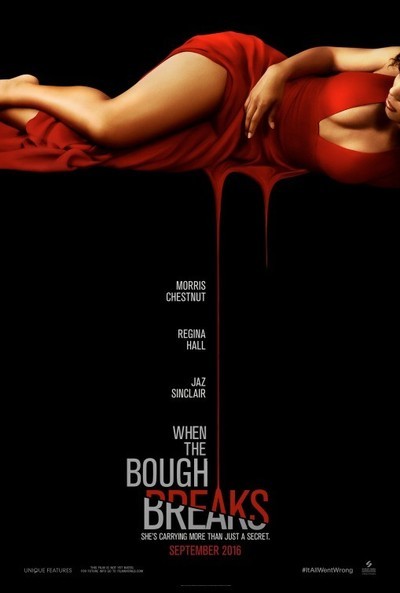