“This is the part of the movie where you kidnap me and sell my organs, right?” Sanaa Lathan’s character playfully asks Michael Ealy’s on their way to an underground nightclub in “The Perfect Guy.” Nothing nearly so wacky or grotesque goes down in this romantic thriller, but you’ll wish it would.

“The Perfect Guy” is decent trash that could have been delicious trash with a little more daring. Director David M. Rosenthal’s film—which, tellingly, Sony did not screen for critics before opening day—is slick, glossy and sturdily made in a way that’s reminiscent of similar sexy-stalker fare from the 1990s. (It’s vaguely Verhoevenish.) It features gorgeous actors in stylish settings with flattering lighting and fashionable clothing. Los Angeles shimmers in the daytime and glitters at night, and much of the action goes down in Lathan’s serene mid-century modern house in the hills (Silver Lake, probably) with floor-to-ceiling glass, minimalist furnishings and generous use of chunky Austin stone.

It’s all very tasteful—too much so, perhaps—which makes the few crazy moments stand out as unintentionally funny rather than cohesive parts of a whole. You keep hoping that an insane Tyler Perry movie will burst free from these understated trappings, but no such luck.

The overqualified, magnetic stars do their best with this tepid material, however. (The script comes from Tyger Williams, whose last screenplay was 1993’s “Menace II Society.” Rosenthal, meanwhile, previously directed the appealing “Janie Jones” and the dreary “A Single Shot.”) Lathan, who’s incapable of finding a dishonest moment on screen, stars as Leah Vaughn, an L.A.-based lobbyist who seems to have it all: brains, looks, power, a gorgeous home and a loving, longtime boyfriend in architect Dave (the ubiquitous Morris Chestnut). After two years together, Leah is ready to get married and start a family; Dave, who’s been surrounded by divorce his whole life, isn’t. So that’s the end of that.

Conveniently, though, she meets cute not once but twice with a super-handsome guy named Carter (Michael Ealy). After sharing a flirty moment at a coffee shop, their paths cross again at a trendy restaurant when Carter swoops in to save Leah from a drunk dude’s unwanted advances at the bar. He really is too good to be true—perfect, even, hence the title. Besides his looks (and his propensity for shirtless, sweaty pushups), Carter is attentive, thoughtful, doting and has a successful career as a high-tech corporate security expert, which will come in handy once he starts making her life a living hell.

Because after the romantic dates, the passionate nightclub bathroom sex (which is, again, tasteful) and the heartwarming road trip to visit her parents in San Francisco (Charles S. Dutton and L. Scott Caldwell), Carter reveals his true nature when he savagely beats a stranger at a gas station for simply speaking to Leah. She is, naturally, disturbed and afraid. She pulls away like any strong, sane person would. This only makes Carter want her more, which he demonstrates by calling and texting her incessantly, breaking into her house, hiding surveillance equipment, hacking into her computer, stealing her cat and pushing her elderly across-the-street neighbor down a flight of stairs when she becomes suspicious of his antics.

There’s no tension or even real fear in his transformation because it happens so quickly. There’s no arc to his personality: He goes from suave to psycho in the blink of an eye. Leah herself says it best when she confides in a girlfriend that it’s as if a switch had been flipped, and it renders his character more of an idea of a threat than a legitimate one. The moment when he sneaks into her bathroom and puts her toothbrush in his mouth just to experience the sensation of being near her should be deeply creepy, but it drew giggles at a late-night showing.

Ealy at least gets more to do here than Chestnut, whose main function is to return in the third act to stoically, heroically protect the woman he conveniently decides he loves again. His character is emblematic of what’s wrong with the entire movie, come to think of it: He looks great but there’s not much to him beneath the surface. 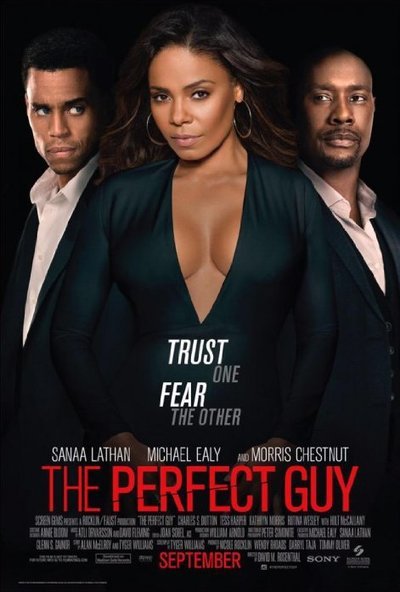