A docudrama about the Germs punks out

If you know the first thing about Darby Crash, it is probably the last thing about him. His self-styled story begins to come into focus only when you can see how and why it ended. That is why we have Richard Grossman's biographical docudrama "What We Do Is Secret" about the frontman for the semi-legendary L.A. punk band of the late 1970s, the Germs.

There's no way of knowing if this rather generic melodrama is quite the posthumous biopic that Crash would have imagined for himself. All we know for sure is he that would have made his own if he could have. Nearly 28 years after his death, and a good 15 years in the making, this is the movie he got.

In his short life, Crash self-consciously embodied more ironic contradictions than even he may have intended. Like the Sex Pistols' Sid Vicious, after whom he molded himself (even adopting the onstage skin slashing), Crash was determined to burn out rather than fade away.

Though posing as a fascist-leaning iconoclast, he was a shrewd careerist utterly devoted to a five-year (anti-)career plan that only he fully grasped. As Darby (Shane West) announces in one of the movie's faux-rockumentary interviews: "I have a very, very set idea of what I want to get done and how I'm going to do it. And I need people to help me do it."

Germs guitarist Pat Smear (Rick Gonzalez) explains, "OK, so this was his plan: Say you're a band, advertise, get band members, get instruments, get a rehearsal space, play a gig and then learn how to play. It's a good plan, right?"

So before the Germs were the Germs, they were T-shirts. They were also a logo: a blue circle. It wasn't long before they achieved limited fame for not playing, which seemed perfectly in line with Crash's ambitions. They were either so bad, or so disruptive, that clubs refused to book them, which only enhanced their reputation. In the movie, every time somebody asks when the Germs are going to play next, a band member replies with some variation on "never."

"What We Do Is Secret" re-creates interviews with Darby, former Germs and others in their circle, ostensibly conducted by Claude Bessy (Sebastian Roche), aka Kickboy Face, the pompously impassioned French scenemaker and co-founder of Slash magazine, who provides gushing commentary from within the picture without actually narrating it. He is this film's Marty DiBergi.

The rest of the movie consists of restaged performance footage, accompanied by all-too-familiar dead-rock-star biopic cliches. (Where's Nigel Tufnel? Where's Dewey Cox?) You do get a good sense of the band's unevenness, and how on any given night they could be a powerful noise unit or just a clot of lousy musicians -- frequently both at the same time. Likewise, the calculated desperation of Darby's stage presence comes across as a transparent pose and an incitement to riot.

What's lacking is a feeling for the heat and deafening chaos of actual club shows. The movie hangs back a little, folds its arms and nods its head, rather than rushing the stage or diving into the mosh pit. The tumult is depicted, not captured.

Where "What We Do Is Secret" succeeds is in the performances which (and this a compliment, I think) sometimes expose a stilted, amateurish strain that's oddly in tune with the characters' D.I.Y. aesthetic. West, who applied realistic chipped-tooth veneers for the part, gets Crash's narcissism and studied obnoxiousness (while expounding on fascism, he's both coy and pretentious), while still showing why the guy would attract a cultish following. As Germs bass player Lorna Doom, Bijou Phillips is so effortlessly convincing that you do believe you're watching an actual documentary whenever she's onscreen.

Flitting through the film are references to contemporary bands and individuals, many of whom are ironically more famous than Crash or the Germs, including X (whose drummer D.J. Bonebrake briefly sat in with the band), Belinda Carlisle of the Go-Go's and Pat Smear himself, who later played with Nirvana and Foo Fighters. Of course, one thing these musicians possessed that Crash and the Germs did not was longevity.

The ultimate irony of Darby Crash's life is this: A few days after the Germs held their farewell show, on Dec. 7, 1980, he shot himself up with a fatal dose of heroin. The next day John Lennon was murdered, thus ensuring that Crash's death, if noticed by anyone outside his immediate circle, would register as a mere footnote. But since Crash is this film's protagonist, Lennon's death is presented as a background accompaniment to Crash's -- a "Rosencrantz & Guildenstern Are Dead" view of 20th century pop-music history. 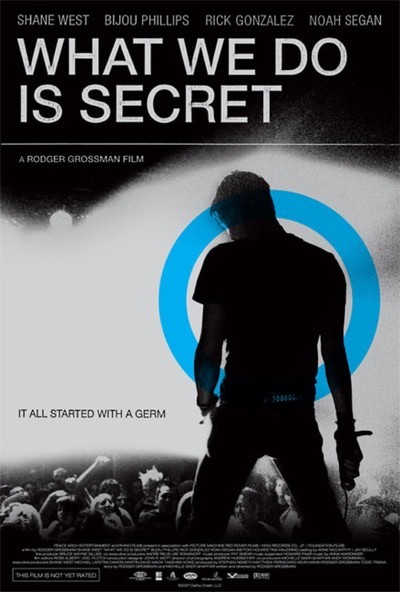 Rated R for drug use, language and brief sexuality