Everything about the romantic comedy “What If” is cute. Utterly cute. Undeniably cute. Uber–duber cute.

The way our protagonists, Wallace and Chantry, meet at a party by both rearranging fridge-magnet words into strange sayings. The way they meet again after both decide to go solo to same revival screening of “The Princess Bride,” an artifact of vintage cute. The way they obsessively bond over the nastiness of fried pickles and how Elvis enjoyed gorging on a monster peanut butter-jelly-and-bacon-stuffed concoction known as Fool’s Gold.

Did we mention that she is an animator–could there be a cuter job to have in this day and age? And that director Michael Dowse oh-so-cleverly allows Chantry’s doodle of a sad-faced girl with butterfly wings to occasionally flutter across the screen and into the next scene? Must be an artisanal statement or maybe a New Millennium answer to Mickey Mouse.

In fact, these kids are so cute, they might as well be called Wallace and Gromit.

What isn’t so cute is the way the pair insist on torturing themselves by denying their feelings and agreeing to just be friends. On the surface, the reasons behind their decision make sense: She has a long-term, live-in boyfriend and he doesn’t want to be the kind of jerk who breaks up a relationship. Plus, ever since his doctor-in-training girlfriend cheated on him and caused him to become a medical-school dropout, Wallace’s motto has been, “Love is stupid.”

But, as Woody Allen once so famously declared: “The heart wants what the heart wants.” A simple shared viewing of “When Harry Met Sally …”  instead of “The Princess Bride” (both Rob Reiner-directed classics) could have saved everyone a whole lot of trouble, including the audience.

Then again, we wouldn’t have had the chance to witness Daniel Radcliffe and Zoe Kazan as they practically will “What If” into seeming much better than what it really is—a glorified sitcom, with outbreaks of awkward slapstick complete with bodily injuries, in the mode of TV’s “New Girl” with its constant riff-happy repartee but three times as long.

Although, I did learn a new sexual term for hand job. Ho job. As in, “I gave him a ho-job for Christmas.”

What does work is the connection between Radcliffe and Kazan. They are so adorable with their mutual big-eye stares and doll-size stature, they put koala bears to shame. But as noted onscreen, their personalities are way too much alike to be meant for each other in the classic sense. In fact, someone makes a joke that Wallace’s name should really be “Mantry”—the male version of Chantry. They might be better suited as playmates than lovers, but even koala bears experience sexual attraction.

Matters start off well as the opening shots reveal we are not in that rom-com romper room known as Manhattan but in Toronto—playing itself for a change in all its new-old aesthetic glory. But once Wallace and Chantry’s attraction becomes obvious to everyone in their lives but them, the plot strains to continue to put barriers between them.

I have another problem with "What If." Namely, being subjected to Harry Potter’s naked butt during a crucial night-time skinny-dipping excursion shared by him and Kazan. I know that Radcliffe has more than earned the right to have a successful career as an adult after dutifully serving as the real-life incarnation of everyone’s favorite boy wizard for 10 years and eight movies.

I would have loved to have seen him dancing and singing on Broadway in “How to Succeed in Business Without Really Trying.” But I don’t think I could have withstood his pants-free performances both onstage in “Equus” and on film as beat poet Allen Ginsberg in “Kill Your Darlings.”  Even if his backside exposure happens on a beach bathed in moonlight, as it does here, it is a difficult transition to make—at least for this viewer.

Not that I didn’t enjoy most of Radcliffe’s fully clothed efforts in “What If.” However, the person in the cast who did get on my nerves was Adam Driver of TV’s “Girls” as Allan, Wallace’s more carnally assertive best friend. It’s a role that should be right in the striking-looking, Emmy-nominated actor’s narcissistic wheelhouse and then some. But someone made the terrible choice of having Allan chew his nails and then casually drop the bitten pieces hither and yon all over a jewelry store. It was so distracting, I barely could focus on his purpose for being there.

Then again, few but Driver could properly deliver this line while oozing post-coital satisfaction: “I just had sex and I am going to have nachos.”

Surprisingly enough, “What If” used to be called "The F Word." No, not that F word. F as in “friends.”

Now, that is cute. 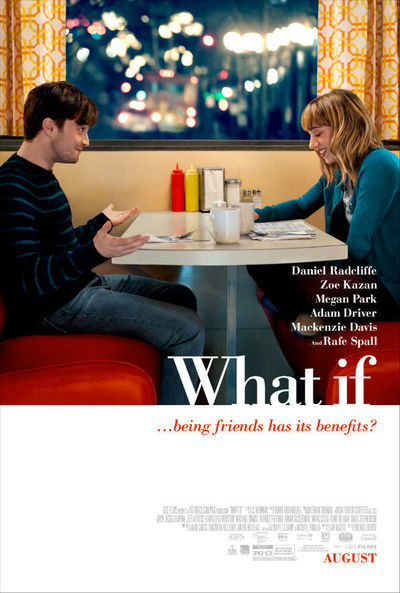 Rated PG-13 for sexual content, including references throughout, partial nudity and language