A sort of Muppet Babies version of the Beat poets, "Kill Your Darlings" presents a minor prelude to a major literary movement.

Director and co-writer John Krokidas, making his feature debut, uses a little-known 1944 murder as his entrée to depict how soon-to-be-famous writers Allen Ginsberg, William Burroughs and Jack Kerouac first met and forged their ethos. But the killing itself is really an afterthought; Krokidas and co-writer Austin Bunn, his former college roommate, devote most the film to boisterous and verbose male bravado. The self-serious way these figures regard themselves—and the self-serious way the film regards them—is cringe-inducing, early and often.

Krokidas romanticizes everything, even the self-destructive instincts that notoriously plagued these writers and inspired their work. The title is "Kill Your Darlings," but the film itself wallows in nostalgia and buys into the hype without digging deeper to provide much insight.

The one wild card throughout is Dane DeHaan's showy, riveting performance as Lucien Carr, the Columbia University student who would take the innocent freshman Ginsberg (Daniel Radcliffe) under his wing and expose him to an intoxicating world of sex, drugs and rock and roll—er, jazz. Radcliffe gets top billing—and "Kill Your Darlings" is yet another laudable example of the actor's daring and desire to distance himself from Harry Potter—but DeHaan steals the show with his unpredictability and smoldering sexuality.

He brings a dangerous edge to the performance, as he has in his recent work in "Chronicle" and "The Place Beyond the Pines." It's easy to see why Ginsberg (and everyone else) would be drawn to this beguiling, androgynous figure. But the film begins with the nerdy and nebbishy Ginsberg receiving his acceptance to Columbia, a place he's desperate to go to escape his dysfunctional parents, poet Louis (David Cross) and mentally unstable Naomi (Jennifer Jason Leigh). Leigh is one of several actresses who get short shrift in this boys' club; Elizabeth Olsen is practically non-existent as Kerouac's girlfriend, a huge waste.

In no time, Ginsberg finds himself missing assignments and messing around with Carr, the athletic Kerouac (Jack Huston) and the dapper Burroughs (an unrecognizable Ben Foster). Krokidas depicts this debauchery through a series of montages which only contribute to the film's superficial feel. Ginsberg also finds himself in an increasingly awkward love triangle between Carr and the older, worshipful David Kammerer (Michael C. Hall), Carr's on-again, off-again mentor and suitor. It is clear very early that Kammerer is the villain in the mix, and not just because he's played by the star of "Dexter" (although Hall's facial hair does make him look extra sinister).

Carr plays everyone off each other in a way that creates increasing tension and is sure to make this insular, booze-soaked clique explode. Through it all, though, the endless posturing and postulating renders these now-famous figures as caricatures.

Suitably, given the subject matter, "Kill Your Darlings" is undeniably stylish and has a lively energy. Krokidas even dares to infuse a little anachronistic music, playing TV on the Radio's pulsating "Wolf Like Me" during a risky midnight library raid, which might just be the best scene in the whole film. (It's a tactic he probably should have employed more often, à la Sofia Coppola's "Marie Antoinette," or abandoned entirely.) 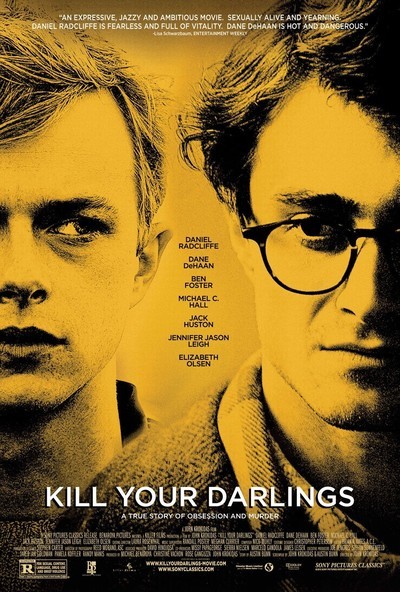