Ah, the 1980s. Forever associated, in film, TV, and theater, with shoulder pads, big hair, cocaine, and more cocaine. It makes sense that the invention of male exotic dancers took place in the “greed is good” era of American pop culture, but it is slightly more surprising to learn that the inventor in question was a Bengali man, originally from Mumbai, named Somen Banerjee. And while intriguing narratives abound in “Welcome to Chippendales,” the new Hulu limited series about Banerjee’s short life, almost all the stories are torn between showing and telling, criticizing and empathizing. Unable to pick a side, or do justice to both, the writing falls flat, taking the actors down with it.

Gas station attendant Somen Banerjee (Kumail Nanjiani), an Indian transplant in Los Angeles circa 1979, brings in tidy profits for his boss, but declines a promotion in order to open, with his savings, a backgammon club. Immigrant stories often traffic in reinvention, and Somen is no different: there was a time when he would have jumped at the chance of a managerial role, but America—plus Hugh Hefner, men’s magazines, and luxury watch ads—have changed him. Wealth is his goal, but so is upward class mobility.

The backgammon club, with the assistance of sleaze-tastic club promoter Paul Snider (a dynamite Dan Stevens, alas limited to a guest role), hosts disco dancing, female mud wrestlers, and perhaps least hygienically of all, oyster-eating contests. But after a lightbulb moment at a gay bar, Banerjee creates the concept of the male exotic dancer, named for one of his heroes, 18th-century British cabinet maker Thomas Chippendale. At this classy club, men will writhe and grind as they shed their clothing, while women hoot, holler, and stuff cash into the nearest g-string. But just having men thrust themselves into women’s laps would make Banerjee’s club no different from a seedy strip joint. So, in 1981, he hires Emmy-winning choreographer Nick di Noia (Murray Bartlett) to design the club’s dance routines, without which we would not have Chris Farley’s Chippendales sketches on “Saturday Night Live” or the “Magic Mike” franchise.

It’s unclear whether Nanjiani wasn’t inspired by the material or simply didn’t have a lot of information about Banerjee on which to base his portrayal. Either way, his performance is stilted, and his body language is practically stagnant. The writing for Banerjee isn’t strong enough to balance praising his business savvy—like calling to report his own business to a right-wing church, then tipping off a local news station when the picket signs turn up—with criticism of his racist hiring practices nor his defensiveness when he’s confronted about it. The series often tries to have it both ways, arguing that the racism Banerjee himself experienced led him to create a discriminatory VIP membership program and that his exploitation of Otis (a flawless Quentin Plair, the series’ breakout star), the troupe’s sole black dancer, who is trotted out like sandwich meat to the customers but not featured in the Chippendales pinup calendar, was merely a reflection of what the customers would want.

The real headliner of “Welcome to Chippendales” is Murray Bartlett. Fresh off his Emmy win for playing an R-rated Basil Fawlty on Season One of “The White Lotus,” Bartlett portrays di Noia with devastating sincerity. Although known as a children’s TV producer, di Noia’s true love is dance. The choreography he designs for the Chippendales dancers is, yes, successfully titillating, but also informed by his closeted sexuality and profound loneliness. Whether he’s undulating his body during rehearsals with sweaty dancers or venting in tormented screams about his increasing distrust of Banerjee, Bartlett conveys verve and sorrow in equal measure. When di Noia’s undercurrent of instability finally rises to the surface, he and his boss start down a collision course that ends how so many stories of greed end: bankruptcy, murder, prison, and suicide. Given the current state of a certain bird-themed social media app, “Welcome to Chippendales” could have been a good place to interrogate the disease that is capitalism. The writers, unfortunately, are not interested.

A few other standout performances often feel like they take place in a different and better show. Love walks into Banerjee’s life in the form of Irene (Annaleigh Ashford), an accountant whose arithmetic meet-cute with Somen—she points out he’s losing tons of money by not filling glasses to the brim with ice—is genuinely sweet. A theater veteran, and possibly my favorite Dot/Marie of Stephen Sondheim’s “Sunday in the Park with George,” Ashford doles out supportive encouragement to di Noia while managing her new husband’s neuroses. Irene becomes a force to be reckoned with, however, when she confronts Somen about his lies. Her voice booms out, instantly shading Ashford’s performance with pain and fear. If the man she loves and has married is capable of lying, what else might he do?

Happily, there are more Sondheim references in “Welcome to Chippendales”: on a trip to New York, di Noia is drowning his sorrows in a bar when he meets Bradford Barton (Andrew Rannells, utterly charming), who belts that eternal anthem of confusion and longing, “Someone is Waiting” from Company. The silent conversation between Rannells and Bartlett, as the former sings and the latter’s eyes fill with tears, is enough to redeem the entire series. Though it is never stated, Barton and di Noia fall in love, and it takes actors of a damn high caliber to convey that via wordless glances of joy and gratitude.

This review would be remiss if it did not address the contributions of Juliette Lewis, who plays Denise, a kooky costume designer and inventor of breakaway clothing. Once she lands work as his primary artistic partner, Denise moves in with and occasionally sleeps with Nick; she acknowledges, however, that Nick is “sometimes” gay. But once di Noia meets Bradford, the trio finds themselves in an uneasy triangle, not always willing to alter their expectations of each other. I do credit “Welcome to Chippendales” for its respectful treatment of di Noia’s bisexuality. Denise is heartbroken when Nick reveals he wants to leave the touring version of Chippendales, which he’d created, to spend more time with Bradford in New York, and one can’t help but sympathize with her.

Lewis, as a performer, is thoroughly unique. Her dialogue delivery defies convention; it bobs and weaves and jumps and wavers, forever leading you to wonder just what she’ll do or say next. If you didn’t know better, you’d think she was a costume designer who time-traveled from the 1980s onto the set of “Welcome to Chippendales” and decided to contribute her life story to the plot. Along with the wonderful Robin de Jesús, who plays club handyman-turned-mafia-style-assassin Ray Colon, Lewis, Ashford, Bartlett, and Rannells do their damnedest to invigorate the story. But if it ain’t on the page, it ain’t on the stage.

“Welcome to Chippendales” is a good example of what happens when you gather quality ingredients—the writers’ room includes Jenni Konner, Rajiv Joseph (“Bengal Tiger at the Baghdad Zoo”), Annie Julia Wyman (“The Chair”), and Robert Siegel (“The Wrestler”), who created the series—and still cannot craft a consistent level of quality. Director Richard Shepard helms the last two episodes and brings some much-needed finesse to the proceedings, but previous episodes, directed by Nisha Ganatra, Matt Shakman, and Gwyneth Horder-Payton, plod along with paint-by-numbers prestige drama energy.

I am always incredibly grateful for representation; it means the world to me, as an Indian immigrant and Hindi speaker, to see Nanjiani speak Hindi, as naturally as he’d speak in English, to multiple characters, including shopkeepers and his mother. Though this is still not the norm, it was unheard of as recently as 10 years ago. I can count on one hand how many limited series are created about brown characters, real or fictional. Despite its shoddy writing, “Welcome to Chippendales” won’t bomb, and I hope it isn’t the final screen credit of anyone involved. Sometimes efforts at representation fail, and that’s okay. Let us simply hope the next adaptation of a brown story will be better than the one that came before. 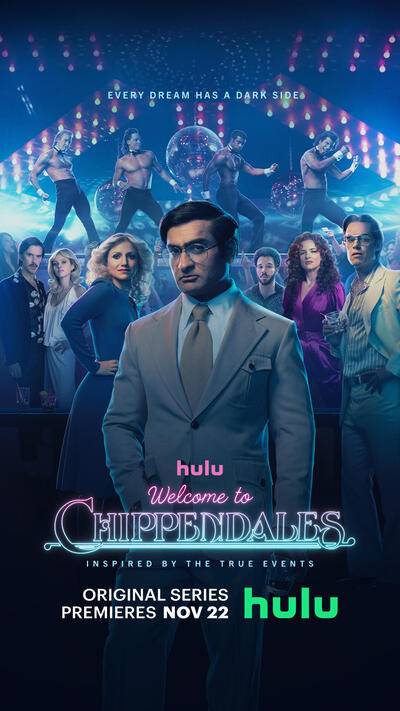