“Money is the greatest evil of all” is a familiar, relatable idea, and Mike White’s limited series “The White Lotus” adapts that observation of late-stage-capitalist ennui into uncomfortable, revealing, insightful, and empathetic scenarios on an island full of privileged people who are varyingly aware of how rarified their air really is. The cast that White has assembled is game for balancing on the thin wires strung up between horror, tragedy, and comedy, and the writing is consistently precise, darkly funny, and thoroughly unsentimental about the ways human beings knowingly and unknowingly hurt each other. Alternately hilarious and unsettling, “The White Lotus” isn’t a feel-good watch, but it is a must-watch.

White, whose Laura Dern-starring “Enlightened” remains a treasure in HBO’s archives, returns to the network for the six-part limited series “The White Lotus,” which premieres on July 11. The opening credits of “The White Lotus” clue you into the series’ sometimes subtle, sometimes glaring “wealth enables rot” mentality: Beautiful, tropical wallpaper designs of flowers, pineapples, iguanas, and leopards stealthily transform into scenes of decay. Snakes hide among bunches of bananas. Fruit rots on the vine. Caterpillars eat leaves until they hang limp, pockmarked and dying. Jellyfish coil around people, seaweed strangles a fish, and a three-person crew battles their canoe against a swelling wave. Will they make it over, or be dragged under?

“The White Lotus” places that question, in both literal and figurative incarnations, on the shoulders of each character who arrives by chartered boat to the secluded, exclusive White Lotus hotel and resort in Hawaii. In a “Big Little Lies”-like opening-scene reveal, “The White Lotus” shares that someone here will die, and then jumps back in time one week. Among the vacationers are the Mossbacher family, comprising tech CEO Nicole (Connie Britton), husband Mark (Steve Zahn), college sophomore daughter Olivia (Sydney Sweeney) and her friend Paula (Brittany O’Grady), and teen son Quinn (Fred Hechinger). Also vacationing are newlyweds Shane (Jake Lacy) and Rachel Patton (Alexandra Daddario), and the grieving Tanya McQuoid (Jennifer Coolidge), who has brought her mother’s ashes to spread into the ocean. These three parties aren’t friends, but they’re familiar with each other in the way that people who cross paths at the beach, at the bar, in the elevator, or in the hallway may be. They recognize each other as the same kind of people, all part of the mega-wealthy who can afford this kind of place.

Meanwhile, the White Lotus staff aims to be, as the fussy, finicky resort manager Armond (Murray Bartlett) tells employees in premiere episode “Arrivals,” “more generic.” The goal, Armond explains, is to “disappear behind our masks as pleasant, interchangeable helpers ... The goal is to create for the guests an overall impression of vagueness that can be very satisfying.” Perhaps that’s good business practice, and for a state like Hawaii—which survives on tourism, and whose citizens’ struggle against ultra-rich outsiders is ongoing—it’s what keeps the wealthy tourists happy. But then Armond takes it a step further, and Bartlett delivers an embittered line delivery that cuts right to the staff/tourist divide: “They get everything they want, but they don’t even know what they want. Or what day it is. Or where they are, or who we are, or what the f**k is going on.”

Armond’s mask for tolerating the guests’ whims, demands, and complaints is beginning to slip, and his increasingly manic behavior worries spa manager Belinda (Natasha Rothwell). She has an earnest belief in holistic health, and she works too hard for too little pay, but she dreams of one day opening a business that would make the spa’s offerings affordable for everyone. (If Rothwell’s bombastic work on “Insecure” is your only awareness of her as an actress, be prepared for her to blow you away with her nuanced, elastic work here. Her last moment onscreen will haunt you.) And over the course of the week, Armand, Belinda, and various other hotel staff members get drawn into the orbit of the guests, their neuroses, and their selfishness, mostly for worse and rarely for better.

Perhaps the idea of watching a group of rich people do rich-people things to the chagrin of long-suffering lesser-thans sounds grueling. But “The White Lotus” hits the same notes as Bong Joon-ho’s “Parasite” by poking and prodding at its characters’ class divide and offering up shreds of empathy and compassion to individuals who are caught in systems, patterns, or behaviors they can’t escape. Are the hotel guests cruel? In the way that Don Draper told Michael Ginsberg that he doesn’t think about him at all, yes. Lacy’s Shane, born into an elite family and constantly nagging new wife Rachel about why she’s not having fun, makes an enemy out of Armond over a petty grievance. Tanya, who covers her traumas and neuroses with layers of nude lip gloss and designer caftans, gloms onto Belinda as her spiritual healer without ever asking her questions about herself. And the Judith Butler- and Franz Fanon-reading, drug-doing, and shit-stirring Olivia and Paula get into a spat over a flirtation with a hotel worker.

In each of these relationships, White digs deeper and deeper into what is making all of these people unhappy, with each episode pivoting into a new perspective and deftly balancing an array of tones. From Paula’s eyes, we see the Mossbachers and their staunch refusal to acknowledge their own advantages. From Mark’s eyes, we see his frustration with his marriage, and with the fact that Nicole treats him like hired help rather than a husband. From Quinn’s eyes, we see a genuine connection with a certain Hawaiian custom, and a true sense of purpose, that Paula and Olivia had only gestured toward with their political theory. The ensemble cast drops façade after façade, and the result is a combination of performances that are nearly universally enthralling. Rothwell, Coolidge, and Daddario are particularly excellent, with Coolidge’s Tanya somehow being both skin-prickingly awkward and deeply relatable, and Daddario imbuing Rachel with a deer-in-the-headlights panic over her husband’s assumptions and expectations. Britton comes alive in a scene against Daddario that makes you hope the former actress gets more chances in her career to bare her teeth, while Daddario’s final scene might be the most genuine, and heartbreaking, of the series. And of the Mossbachers, Zahn and Hechinger have great chemistry as a father-son duo who don’t know each other at all, and whose transformative experiences on the island take them in wildly different directions.

Our expectations of vacations are that they rejuvenate and reinvigorate us, with the assumption being that the place we travel to offers peace of mind and self-betterment that we can’t find at home. There’s both selfishness and vulnerability to that belief, “The White Lotus” argues, and which assessment you agree with at the end of the series might not be what you thought when you began. White spins “Have a nice vacation” into both a blessing and a curse, and “The White Lotus” thrives in between those extremes.

Whole series screened for review. “The White Lotus” premieres on HBO on July 11. 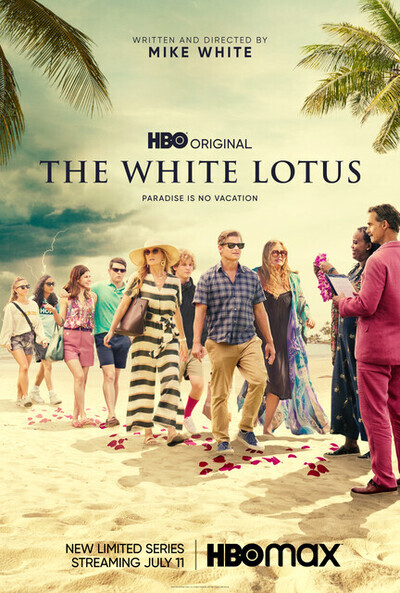