We Summon the Darkness

If you are in the mood for a little bit of non-elevated horror, this new movie directed by Mark Myers (who made the mostly okay “My Friend Dahmer”) from a script by Alan Trezza (of the mightily disappointing “Burying the Ex”) could provide a satisfying hour and twenty or so. The opening shots attempt to establish bonafides through allusion. It’s a sunny day and we’re on a highway in the middle of nowhere, just like in the original “Texas Chainsaw Massacre.” In a ground-level shot, we’re treated to the sight of a live rabbit on asphalt as opposed to a dead armadillo. Inside a car traveling down that road are three rowdy metal chicks.

Platinum blonde with very pronounced roots Val (Maddie Hasson) complains of a weak bladder, only to be chided by driver and the trio’s alpha Alexis (Alexandra Daddario); the most reserved of the girls is Amy Forsyth’s Bev. They stop at a service station, where Val fills the tank while striking a pose like she wants to be in a Carl’s Jr. ad. The year, lest you were wondering about anachronism, is 1988, and on a TV in the gas station’s convenience store an evangelical preacher (Johnny Knoxville) rails against satanic music while tabloid headlines blare news of a new Lucifer-inspired mass killing.

A charged atmosphere at which to be attending a concert by Soldiers of Satan (whose supposed music, heard for only a fleeting moment, sounded pretty false metal to me), but really, the kids are only looking for a good time. Those kids include three likely lads who the girls pick up at the show and bring back to Alexis’ parents’ place. The goofy bros are going to get something wholly other than what they bargained for, though.

The subsequent plot twists serve something like a satiric purpose, and anyone who’s actually surprised by the pivotal ones doesn’t really know much about what reactionaries like to refer to as “liberal Hollywood.” The cast members have fun in the first half impersonating perhaps their metal head cousins who gave them their first bong hits when the time was opportune, and Trezza’s script obliges them by providing lots of metal wonk dialogue, with the dudes and the chicks debating the merits of pre-and-post Dave Mustaine Metallica. Once the carnage begins, things become a little more pro forma, up to and including an unexpected visitor, the cutting of the house lights, and more, including Knoxville showing up again, this time in the flesh. Other snafus that occur are the vin ordinaire of a scenario in which characters who have committed themselves to mass slaughter find they aren’t very good at it.

The proceedings are not entirely unamusing in their lurid way, but they’re also not nearly as clever as the filmmakers believed or hoped they would be. 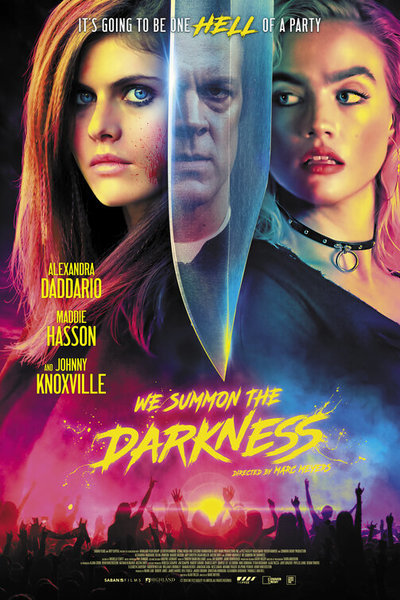 Rated R for bloody violence, pervasive language, some drug use and sexual references.