Nobody doubts that director Joe Dante, the eye and sensibility behind “The Howling,” “Gremlins,” “Innerspace,” and more, is a genre master, a guy who can blend gory horror with mordant comedy with apparent ease, who can bring a true Looney Tunes feel to live-action sci-fi and fantasy, and more. Even masters have their off days, however, and Dante’s new picture, “Burying The Ex,” seems to have been made over the course of quite a few of them. Scripted and co-produced by Alan Trezza, and admittedly shot on the cheap over what must have been a very punishing 20-day shoot, the picture has intermittent charm and very little flair. Its eagerness to ingratiate long-time horror fans, what with its multiple references to obscure films and nods to specialist publications such as Video Watchdog (and yes I am a proud subscriber), actually gets a little irritating after a while. Yes, “Burying The Ex,” I thought as I watched, I AM on your side conceptually already. Now could you start being genuinely funny? Or scary? Or something?

Anton Yelchin’s Max is a horror geek who works at a memorabilia shop and is hoping to start his own such emporium. His rather improbable girlfriend Evelyn (Ashley Greene) is a prim (in every respect except sex-wise, which trait I guess is meant to register as “quirky”) eco-warrior who has little patience for Max’s enthusiasms or his ultra-loutish half-brother Travis. The whole Max-Travis dynamic is reminiscent of the male relationships in early Seth Rogen/Evan Goldberg scripts such as “Superbad,” only those works had good jokes. Trezza’s script teems with clumsy lines such as “Just let me finish up this blog” (the character means “blog post”) and “That was fangtastic.” And the Max/Evelyn relationship is reminiscent of “Knocked Up,” I guess, because the couple only ever has Bra Sex. Evelyn moves in and takes down all of Max’s cherry Italian horror movie posters, while a local ice-cream shop gives Max a taste of alternate dating reality in the form of horror-movie loving Olivia (Alexandra Daddario). Also: a talisman at Max’s shop puts, apparently, some form of curse on Evelyn. So that when she’s killed in a street accident, she doesn’t stay dead. Hence the title.

Zombie Evelyn isn’t like other zombies: she’s fully functional, brain-wise, and weirdly for Max, just as frisky as she was when she had a beating heart. She doesn’t even look that bad—not falling-off body parts, some bruising around the face and neck and a generally hollowed-out thing going on. “Your girlfriend is so Goth,” Olivia says to Max, not suspecting the bizarre love triangle she’s walking into. That last line is about as close to a good one-liner as the movie offers up, by the way. As for the zombie stuff, it’s even less convincing and engaging as I’m making it sound. I know that horror movies, or horror comedies, aren’t for people who like their film scenarios plausible, but “Burying The Ex” offers such a watered-down and internally inconsistent idea of zombiedom that it makes any kind of willing suspension of disbelief well nigh impossible. The material proves, I fear, intractable for director Dante, who shows a little verve in the last third, intercutting a new-love sequence with a bit of human-organ-eating on abandoned-for-the-evening Zombie Evelyn’s part. Different strokes, as they say. Potentially tautological as this may seem I’m not even sure I can, with good conscience, call this a film for Dante completists only. And I can only hope he gets a bigger budget and more time, and a better script, for whatever he does next. 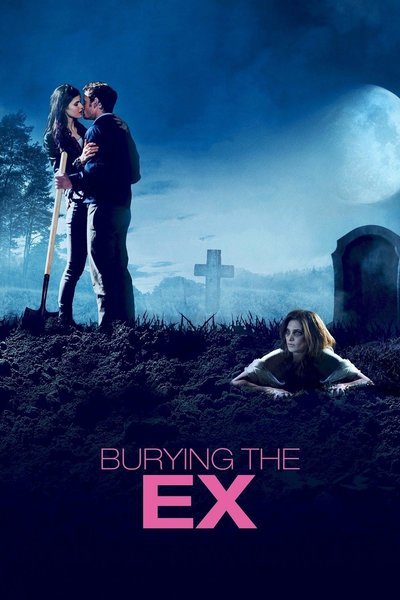