Olivier Assayas’ “Wasp Network” is a lot of movie. It tackles enough narratively to hold up a season of television, maybe two, chronicling nothing less than the state of Cuban espionage and immigration in the ‘90s. As he has been before in films like “Something in the Air” and “Carlos,” Assayas is interested in the intersection of the political and personal, presenting stories of men and women so committed to a cause that it defines their lives and those who love them. Taken in pieces, there’s more here to like than the muted response to this film from Venice and TIFF last year would have you believe, but the scope of the project gets away from Assayas as it widens in the second half, losing its characters in the canvas of the major events the script feels the need to recreate. Still, one can see the craftsmanship and skill with actors that Assayas has honed for the last three decades in the film’s best moments, even if it adds up to something of a disappointment when compared to the majority of his filmography.

Edgar Ramirez, so much better here than in “The Last Days of American Crime” that he seems like an entirely different actor, reunites with his “Carlos” director to play Rene Gonzalez, whom we meet in 1990 in Havana. A pilot for tourist sky divers, Rene leaves for work one day, kissing his wife Olga (Penelope Cruz) goodbye before flying all the way to Miami. Defecting to the United States and leaving his family behind, Rene becomes a major player in a covert organization that patrols the waters between Cuba and Florida, often dropping supplies to defectors on rafts or radioing details about the locations of Coast Guard boats. As a pilot, Rene becomes embroiled in darker elements of the Cuban-American dynamic, and there’s a fascinating subplot about the morally gray areas of revolution. If Rene can help drug smugglers that can finance the anti-Castro revolution, is the crime worth the greater good?

There’s more to Rene’s story than first meets the eye and Assayas doesn’t forget about Olga or the child she’s raising without a father. Throughout the film, he returns to scenes of Olga working hard—in a tannery, as a janitor, at a desk job, etc.—reminding us that none of this is easy. For every revolutionary, there’s someone working multiple jobs to feed their children. And he contrasts this with the other half of his film for at least the first hour, the story of a movie star named Juan Pablo Roque (Wagner Moura), who literally swims to Guantanamo Bay in his first scene. Defecting himself, he ends up a pilot for revolutionary causes as well, but he’s got secrets too, and a new wife named Ana Margarita (Ana de Armas) who becomes suspicious of his inexplicable wealth.

If it sounds like a lot for one movie, I’ve barely scratched the surface. “Wasp Network” eventually expands to include multiple double agents, a coordinator played by Gael Garcia Bernal, the Cuban hotel bombings from 1997, and even the CIA's involvement in all of it. It becomes almost numbing the further that Assayas gets away from his characters and he loses the urgency of it all in the back half in a way that I’m not sure he has before. It almost feels like there’s a longer cut of “Wasp Network” that doesn’t feel so episodic, or rush through events of history as it goes along. When the film allows performers like Ramirez and Cruz the space to build characters, it works, but even they get lost in the hurried narrative of the film, one that’s trying to do so much in terms of history that it’s easy to get confused, and easier to stop caring.

And yet it’s hard to completely dismiss what does work about this film, especially in its set-up hour. There are visual choices on Assayas’ part and details within the performances that can’t be ignored. Cruz’s work has a quiet determination that I wish was in a better movie overall, and Ramirez reminds one how charismatic he can be when given an actual character. Netflix has a trend lately of giving major filmmakers more freedom than studios with projects like “The Irishman” and “Da 5 Bloods.” And while this was bought by Netflix after fest season and not produced originally by them, it fits that model of a filmmaker’s most high profile cast and big-budget backdrop (there are even some flight scenes that one could call “action”). Personally, I like my Assayas films tighter, more focused on performance and scene construction than the increasingly sprawling approach here. However, as is often the case, minor work from a major filmmaker can still offer up a few cinematic treasures. 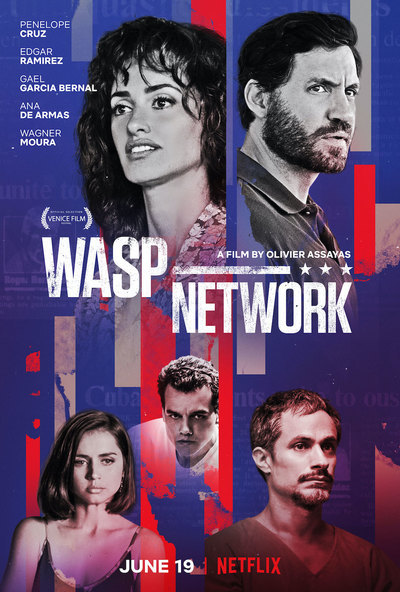