First, a confession: I have never played any incarnation of “Warcraft.” I’m just going to put that out there right now—be up front about it. We’re all friends here. We should be honest with each other.

So I went in with an open mind to “Warcraft,” the movie based on the video game, and I’m reviewing it purely on its own merits as a stand-alone entity. Many of you out there may read this and cry foul: “She’s never played the game! She has no idea what she’s talking about!” And I’m OK with that. Really, I am. But I’m also hoping that the game is more emotionally engaging—or at least, you know, fun—than the movie I just saw. Because that thing was a dour mess.

And it brings me no joy to report that to you because “Warcraft” comes from a filmmaker whose work I’ve been a big fan of: Duncan Jones. With just two features to his credit, Jones has shown a real knack for taking complex, sci-fi stories and telling them in clever, intimate ways. His debut, “Moon,” was my favorite movie of 2009; it was about mind-blowing, existential stuff but it had real verve, immediacy and heart. (Plus: If one Sam Rockwell is good, two Sam Rockwells are great.) Jones’ 2011 follow-up, the time-travel puzzle “Source Code,” felt like a bit of a let-down by comparison but it was thrilling and challenging, and it showed his evolution as a filmmaker with a bigger cast and more expensive toys.

So it’s hard to figure out what happened with Jones and “Warcraft.” It’s as if the endeavor swallowed him whole. This was clearly a formidable undertaking filled with sweeping imagery, motion-capture performances and tons of visual effects, all being projected in overwhelming IMAX 3-D. In the midst of all that, it’s difficult to hear his voice—to see his attention to detail.

An enormous budget and state-of-the-art technology have resulted in a movie that looks cheesy and cartoonish—a big-screen version of a video game world that more closely resembles the video game commercials you see on TV. But “Warcraft” is difficult to follow from both a visual and a narrative perspective, with massive battle scenes between orcs and humans in which it’s difficult to tell who’s doing what to whom.

Similar to luggage at the airport, many orcs look alike. Hulking, tusked, muscular and festooned with fierce accoutrements, they’re like refugees from a GWAR concert. But eventually you don’t know whether you’re looking at a good orc or a bad orc, and the CGI spectacle of it all renders everything with a glossy, detached sameness.

Forgive me for wanting a little realism in my orcs. Because yes, that’s what “Warcraft” is about: orcs and humans, and their noisy efforts to enter each other’s realms and destroy each other. But the mythology is much more dense than that; the script from Jones and Charles Leavitt contains reams of expository dialogue, yet the story itself feels mind-bogglingly convoluted. And yet, in between the self-serious, stilted conversations, we get snippets of quippy, anachronistic banter that are meant to provide humor but instead end up being jarring.

The film begins with orc warrior chief Durotan (Toby Kebbell), his pregnant wife, Draka (Anna Galvin), and their clan leaving their dying world by passing through a portal that looks like a wall of swirly, minty mouthwash. On the other side is the more peaceful and pastoral Azeroth—although every sparkly, new fantasy realm we enter here calls to mind a place we’ve visited previously at some point in the “Lord of the Rings” saga. There’s a lot of borrowing going on in “Warcraft.”

Once they arrive, they attack the humans for control of the land: knights led by Durotan’s counterpart, the noble but personality-free Lothar (Travis Fimmel, the Brooklyn pickle entrepreneur of Rebecca Miller’s “Maggie’s Plan”). But while Lothar dutifully serves his king (Dominic Cooper) and queen (Ruth Negga), Durotan begins to question the motives of the clearly insane and power-hungry orc warlock Gul’dan (Daniel Wu). The fact that Gul’dan has pulsating green eyes and likes to drain people of their life force to fuel his own magical abilities may have something to do with it.

The humans have a powerful wizard of their own: Medivh, or “The Guardian,” as he’s known. He’s played by Ben Foster in a bit of casting alone that suggests perhaps he’s not to be trusted. And sure enough, Foster tries to bring glimmers of his trademark menace to the character, but it’s hard to act amid all the noise. Basically, he’s called upon to transport himself and others from place to place by stringing together strands of glowing, blue light and chanting a few spells.

In the midst of this struggle is Garona (Paula Patton), who’s half human, half orc. The fact that she’s being held prisoner and is dressed in chains and tatters for maximum sex appeal provides an uncomfortable racial element to the action, but “Warcraft” seems more interested in exploiting her character for titillation rather than exploring her significance from a societal perspective. (Between this and the latest Adam Sandler Netflix debacle, “The Do-Over,” the charismatic Patton is having a rough couple of weeks. She deserves better.)

Eventually, alliances must be forged to save humanity and orc-kind alike. But first, young mage Khadgar (Ben Schnetzer), an ally of Lothar’s, must learn the secrets hidden inside a purple room that’s meant to be futuristic but looks like a rejected set from “Logan’s Run.” There’s also a giant, evil statue made of clay that comes to life, but it’s more unintentionally hilarious than frightening. And before there can be any peace, there is pummeling—lots and lots of pummeling—as the orcs fight the humans as well as each other under hot, dusty skies. It is brutal. It is repetitive. It is numbing.

And just as it’s ending, “Warcraft” leaves all kinds of plot threads dangling for the ambitious possibility of a sequel. But you’ll be likely to cry “Game Over” because this first one is easily a contender for the worst movie of the year. 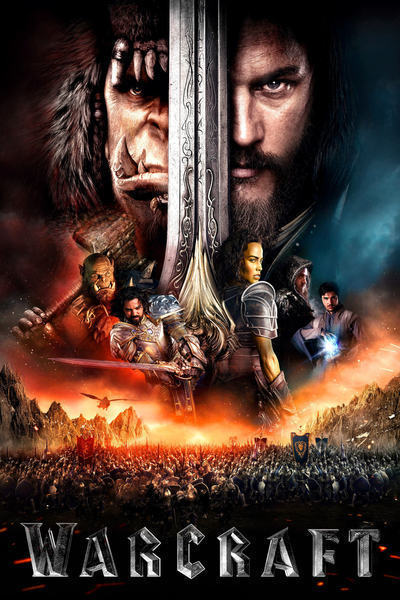