A group of gorgeous young people give into their most primal urges on a decades-long, interplanetary journey in “Voyagers.” And if that sounds like sexy Lord of the Flies in space, well ... it is. But despite the familiar nature of the themes writer/director Neil Burger is exploring, his film still offers plenty of tension and his trademark visual panache.

Similar to his “Limitless” from a decade ago—the film that showed the world Bradley Cooper was a serious actor and not just a pretty face—Burger tells a story about what happens when people tap into their heightened, true selves, for better and for worse. Instead of taking a drug, though, they eliminate one from their systems: a daily drink they refer to as “The Blue.” These astronauts think it’s a vitamin supplement to fortify them for the long haul, but it actually evens them out and suppresses negative tendencies like jealousy and rage. It’s supposedly all for the greater good, though, in Burger’s streamlined, sci-fi tale.

In a near future, Earth has become uninhabitable because of climate change, drought, and disease. Scientists discover a new planet for humans to colonize—trouble is, it takes 86 years to get there. So they breed a crew of brilliant cadets who will board the ship and eventually procreate during the trip, with the ultimate goal of having their grandchildren start over in this brave new world. They include level-headed Christopher (Tye Sheridan), inquisitive chief medical officer Sela (Lily-Rose Depp) and Zac (Fionn Whitehead), who’s clearly going to turn villainous based solely on his intense eyes and chiseled cheekbones. The only seasoned adult on board is Richard (a tender and grounded Colin Farrell), who’s played a crucial role in raising these astronauts from their earliest days and wants to see the mission through, even though he knows he’ll die during the course of it.

Burger efficiently establishes the rhythms of this place and the roles the crew members play in it. They are busy and bustling but peaceful as they work together in their matching, midnight blue T-shirts and joggers to make repairs, grow food, and keep themselves fit. Part of their daily routine is a trip to the mess hall fountain to pour themselves a slim glass of a blue beverage they believe is for their overall health. But when Christopher and Zac begin questioning its benefits and stop drinking it—and then advise others to do the same—a thrilling sensory awakening occurs in all of them.

Reminiscent of the drug montage sequences in such films as “Requiem for a Dream,” Burger depicts in zippy and vibrant fashion the rush of experiencing pure emotions for the first time: the joy of running down a hallway, the exertion of playfully wrestling in the gym or—in time—the pleasure of touching a member of the opposite sex. (Apparently there are no gay astronauts on this mission.) A geyser erupts, pupils shrink and expand, arm hairs stand up on end—the kind of imagery you’ve seen many times before to suggest a symphony of sensations. But the dark strings in the score from composer Trevor Gureckis suggest this reverie cannot last, and a ship that once seemed full of boundless discovery and possibility tightens with claustrophobia and paranoia. (Chilean cinematographer Enrique Chediak makes this sleek, singular location feel both expansive and constricting, forcing you to hurtle through the hallways as if you, too, are being chased by angry, horny teens.)

Going off The Blue allows the astronauts’ true personalities to reveal themselves, resulting in a tried-and-true, nature-versus-nurture debate. As the cadets grow more confident and curious, issues of free will and consent also come to the forefront. But Burger doesn’t really dig into these topics too deeply; rather, he seems more interested in keeping the story moving along at a sprightly clip as characters turn on and attack each other. Burger also directed the first “Divergent” movie, which “Voyagers” resembles with its attractive actors and futuristic, YA-friendly premise.

Within this crucible, the kindhearted but boring Christopher emerges as a natural leader seeking to protect his crewmates and maintain some semblance of civilization. He’s the Ralph figure, if we may continue this Lord of the Flies analogy—and Zac clearly becomes the swaggering, antagonistic Jack as his impulsivity and cruel streak take hold. At one point he even says to the others: “Anyone who wants to follow me can. I’ll make more food.” He’s chilling in his depravity and in his cool ability to lie and spin events to suit his narrative, but there’s not a lot of complexity there. Depp, as Sela, keeps her wits about her amid the mayhem but gets little more to do than serve as the beautiful woman they're both fighting over. And the by-the-book Phoebe (Chanté Adams of “Roxanne Roxanne”), who’s constantly being shushed when she tries to argue for reason, functions as the sadly put-upon Piggy figure.

But if Burger were interested in telling a truly relevant and thought-provoking story, it would have been cool to have her be in charge, or anyone besides these two simple, male archetypes he’s whipped up in his own lab. 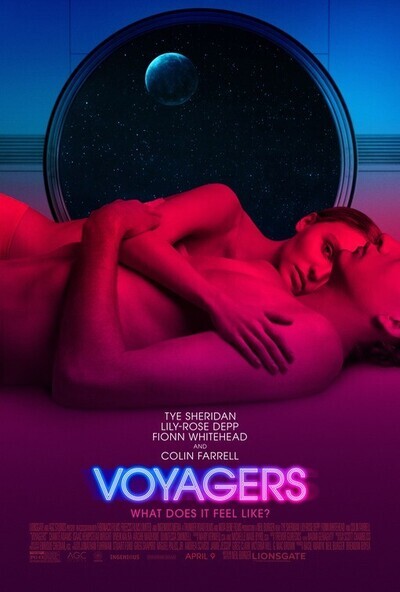