North American moviegoers don’t get to see contemporary Havana on screen all that much, and the views of that city and some corners of its culture are among the best reasons to check out “Viva.” The movie was conceived, written, shot and produced by a team of Irish filmmakers, and while its routinely sentimental story line could read as a European import, the performances and the depicted milieus feel distinct and right.

The movie opens with Jesus (Héctor Medina), a thin and delicately-featured young man, styling the hair of an old woman. His apartment is run-down but sturdy, with a small balcony; the presence of Jesus’ busybody client and his sassy female pal Cecilia (Laura Alemán) give it a cozy feel in spite of its grubbiness. In this teeming slum, money’s too tight to mention, as is space. After Jesus is done with the old lady’s hair, she partially stiffs him on the fee, and Cecilia inveigles Jesus into letting her use his apartment for a hookup session with her boyfriend Javier (Oscar Ibarra Napoles), an up-and-coming boxer. Jesus wanders the street, considering his options. Before arriving at the drag club where he tends the wigs of the ruler of its roost, aptly named “Mama” (Luis Alberto García), Jesus wanders past a park where male prostitutes solicit (mostly) tourists.

Jesus would prefer to perform, although he’s got no experience in drag. He picks an outfit, gives himself a performing name ("Viva"), and brings some vintage Cuban vinyl to spin for his audition. For his troubles, he gets called “Godzilla” by the other drag performers, none of whom, truth to tell, are within swinging distance of “passing.” No matter. Mama intuits the choices Jesus is facing and gives him a slot. One evening, a burly, bearded drunk to whom Viva is directing her romantic lip-syncing punches her in the mouth.

Jesus’ father Angel (longtime Cuban star Jorge Perugorría) is a one-time boxer who had been serving a prison sentence for killing a man in a brawl almost 20 years before. He is also a big homophobe. So there’s the central conflict, and if you’re thinking that the rest of the film concerns itself with the way these two find understanding and reconciliation, well, ding ding ding as the sound effect on some game shows goes.

Neither character talks all that much, but both actors project complex intelligence and consistent emotional acuity. As Angel, Perugorría brings a strong, downtrodden machismo vibe, with intimations of Aldo Ray and/or Russell Crowe gone to seed; Medina’s Jesus is also vivid. They, and other cast members, make the movie more moving than it might otherwise have a right to be. While director Paddy Breathnach shoots in a widescreen format without often having much of an idea what to do with it (and goes wobbly-handheld far too often, possibly in thrall to the fallacy that shaky camerawork enhances realism), every now and then he hits on a composition that yields a powerful depiction of Havana. The old cars, the record stores stocked with old LPs, the corner drag club providing a den of cheerful and proscribed iniquity in plain sight—the atmosphere carries a weirdly intoxicating quality in spite of its privation. The lifting of the U.S. embargo on trade with Cuba will, no doubt, bring more 100-percent Cuban cinema into the view of U.S. moviegoers. But it shall also, no doubt, change Havana itself. The city seen in “Viva” may be disappearing even as I write these words. 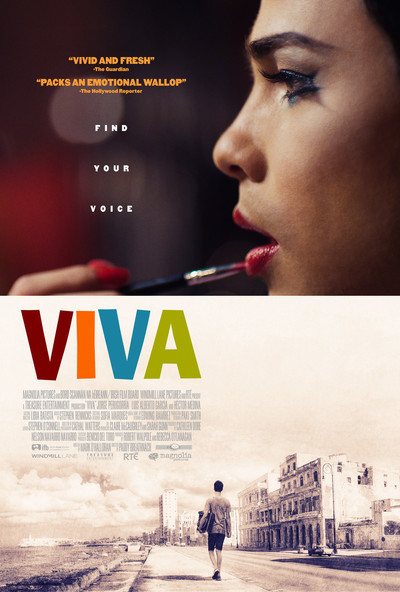