I suppose as a longtime fan of Universal monster movies and other forms of classic horror, as well as being, you know, an old man, I can be forgiven for having hoped that this newfangled origin story of a fabled monster maker would be something not entirely awful. Call me a naïve old man. Directed by Paul McGuigan (of “Lucky Number Slevin,” which should have tipped me off a little) from a screen story and script by Max Landis (of whom it can be said, at the very least, that horror appreciation runs in his family, what with his father having made “An American Werewolf In London”), “Victor Frankenstein” is, despite bravura performances from committed young leads Daniel Radcliffe and James McAvoy, all kinds of obnoxious and pointless.

It begins with Radcliffe’s Igor narrating that there’s a story “we all know,” but that the story he’s about to tell is different … and yes, I said Igor. Radcliffe’s at-first-nameless character is introduced as a much-abused circus hunchback who’s also, get this, a self-taught expert in anatomy and biology. I know, right? He pines for circus acrobat Lorelei (Jessica Brown Findlay), and when she suffers a fall, he and med student Victor Frankenstein (visiting the circus for, um, spare animal parts it turns out) perform a reviving miracle on her … and thus a bond is formed. Victor abducts the future Igor from his sideshow captors, in a scene that brings to mind a Guy Ritchie "Sherlock Holmes" movie, only not as good (yes, you read that right, “only not as good”), and installs him in his lab, the better to assist him in his ambitious, perhaps mad, schemes.

Landis’ script is extremely knowing and endlessly allusive. The Frankenstein here is Mary Shelley’s but his backstory includes a brother, Henry, which is the name of the character played in James Whale’s “Frankenstein” from 1933. A police inspector tracking down Victor and his new pal gets an origin story of his own, one that puts him in line to become the Lionel Atwill character if this movie becomes a franchise, which we ought pray it does not. For all the enthusiasm brought to bear, and again, despite the brio of the young cast (McAvoy makes his “let’s create life” speeches with spittle-projecting eagerness), the movie’s a bloody mess, and a needlessly loud one as well. 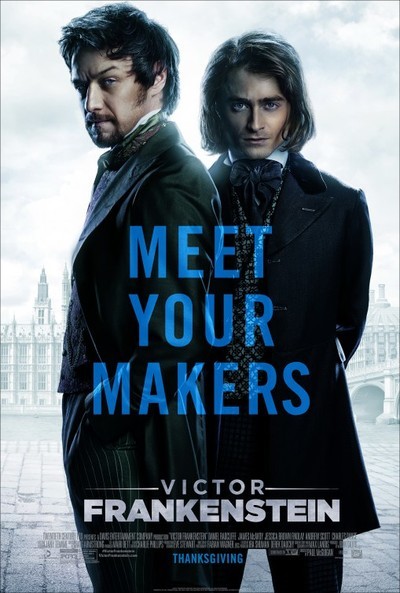 Rated PG-13 for macabre images, violence and a sequence of destruction